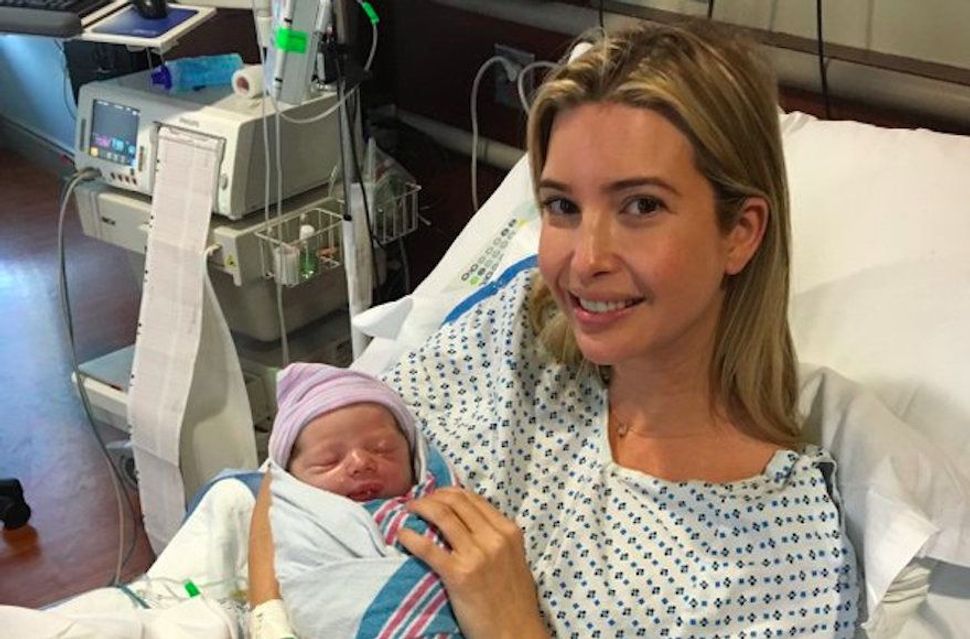 The bris of Theodore James Kushner took place in New York on Sunday. He is the son of Trump’s daughter, Ivanka, and son-in-law Jared Kushner. Ivanka Trump converted to Orthodox Judaism in 2009 in order to marry her husband, with whom she already has two children: Arabella, 4, and Joseph, 2.

Photos of the younger Trumps leaving for the Manhattan bris, and of guests arriving for the circumcision ceremony, appeared in the British tabloid newspaper the Daily Mail.

Donald Trump did not appear in any of the photos, though his ex-wife who also is the baby’s grandmother, Ivana Trump, was photographed.

Donald Trump’s Twitter feed showed him going from event to event all day Sunday in Wisconsin.

A New York Times reporter on the trail with Donald Trump also tweeted that the candidate would skip the bris.

“I love the people in this room. I love Israel. I love Israel. I’ve been with Israel so long in terms of — I’ve received some of my greatest honors from Israel,” Trump said at the end of his speech.

“My father before me, incredible. My daughter, Ivanka, is about to have a beautiful, Jewish baby.”

A recent report revealed the machinations behind Trump’s scrapped plan to visit the Jewish state — and a supposed outburst at Jared Kushner.

New York Magazine’s revealed Ken Kurson, the editor of The Observer, which is owned by Kushner, helped him write the red meat speech The Donald gave at the American Israeli Public Affairs Committee’s confab.

From New York mag: (Kushner) helped plan Trump’s trip to Israel last December, though it didn’t go exactly as planned. When Prime Minister Benjamin Netanyahu criticized Trump’s proposal to halt Muslim immigration, Trump canceled the trip. “This was all your idea!” Trump scolded his son-in-law, according to a source. He fared better with Trump’s AIPAC speech, which Kushner wrote with input from Observer editor Ken Kurson. It was one of the most subdued of his public statements so far, perhaps because it was the only one he has read from a Teleprompter.

Trump’s campaign said the report of him scolding Kushner is false.