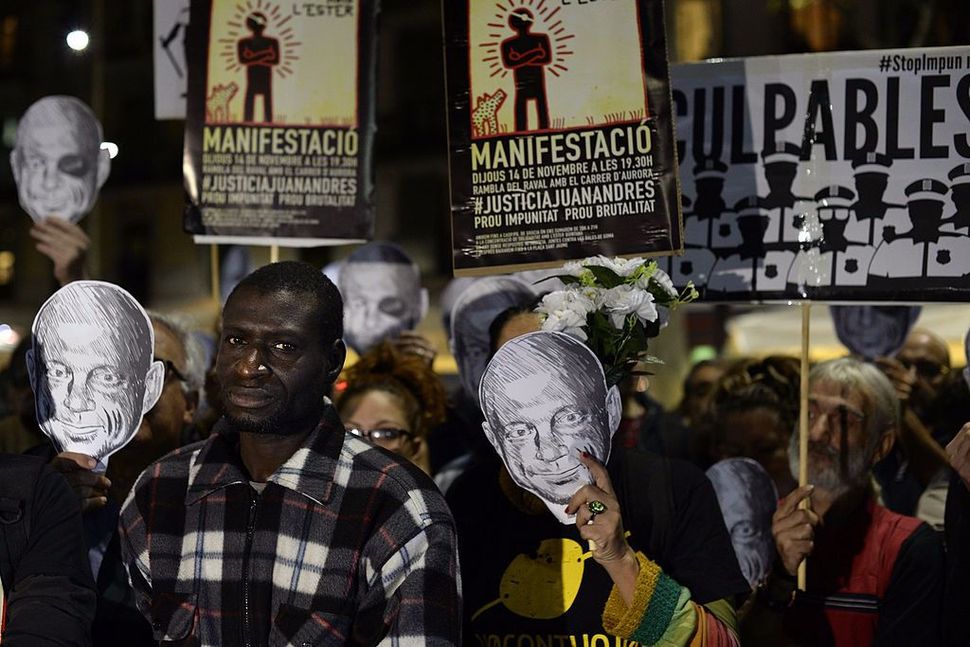 NEW YORK — A pro-Palestinian student group at NYU that blamed Israel for recent police shootings of black men is now scaling back, somewhat, on the accusations it made on Facebook.

In the original Facebook post from July 7, the New York University Students for Justice in Palestine group held Israel accountable for the black people “lynched” by police forces in the United States because “many U.S. police departments train with the Israel Defense Forces.”

The post attracted plenty of attention, but not many likes. The majority of the more than 600 comments expressed disgust, amusement and incredulity at the group’s claims.

The NYU Students for Justice in Palestine followed up on the backlash with something of a clarification, if not actually a reinforcement, of the sentiment that the IDF bears culpability for oppressive practices of black Americans.

“Our statement regarding the murders of Alton Sterling and Philando Castile—and the rampant murders of Black Americans by the police—was not a suggestion that their deaths are part of an Israeli conspiracy. Israel did not literally kill either of these men: that much is obvious,” the SPJ chapter said in its follow-up post on July 9.

That post reiterated the assertion that the IDF training of some American police officers is behind a brutal ethos.

“The IDF assists the NYPD and other American police departments in their oppression and murder of black people,” the second post said. “These groups share a common logic that manifests in several types of oppression, white supremacist racism among them.”

The accusation that Israel’s counter-terrorism training of American officers contributes to police brutality is not new for this group, or other Palestinian sympathizers. Pro-Palestinian activist Alice Rothschild recently wrote an opinion piece for the anti-Zionist website Mondoweiss called “Modern day lynchings: an international view.” In 2015 black student groups at Yale, Columbia and UC Berkeley signed onto a statement calling for solidarity between blacks and Palestinians. It also denounced “police and soldiers from the two countries [who] train side-by-side.”