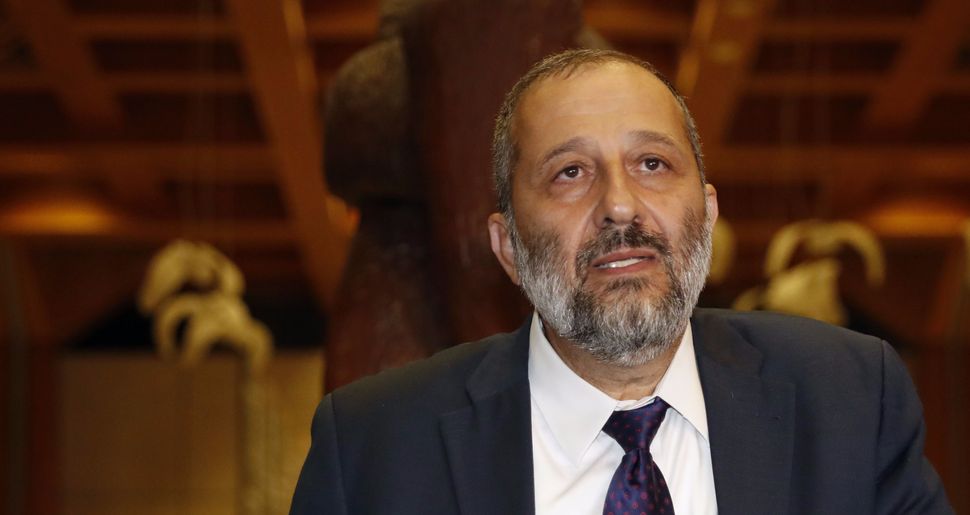 JERUSALEM ( — Israel’s interior minister, Aryeh Deri of the Sephardic Orthodox Shas party, called Reform Judaism an “imitation” and said he “can do without that Judaism.”

Deri, the Shas leader, reportedly made the comments on Monday during a question-and-answer session in the Knesset.

“I want the original, not the imitation” of Judaism, Deri said in response to a question from the centrist Yesh Atid party’s Elazar Stern about the altercations last week at the Western Wall, when leaders of the Reform and Conservative movements brought at least 12 Torah scrolls into the women’s section for a prayer service.

Protesters for egalitarian worship at the Western Wall were met with pushing and shoving by haredi Orthodox worshippers and berated with cries including “Nazis” and “whores.”

“The Reform and Conservative Jews are our brothers, but I have serious differences of opinion with them,” Deri said. “What is the Kotel? The remains of the Temple which we believe and yearn will be rebuilt and we will offer sacrifices there. They don’t believe in that and don’t want it. Provocation. With all due respect, this is not a matter of coming together or distancing, but an ideological dispute.”

Deri reportedly added that the non-Orthodox movements are “causing great damage to Judaism.”

He said by way of explanation that he visited the northern Israeli city of Karmiel, where he saw a government-funded Reform synagogue that he said put out trampolines and vending machines on Yom Kippur, and to which its members drive on Shabbat.

“I ask you, is that the Judaism we want?” Deri asked. “I’m willing to do without this Judaism.”

“Deri’s opinion about our religious path doesn’t interest us, and we aren’t asking him for a kashrut certificate,” Kariv told the Haaretz daily. “Our demand for equality is directed at the State of Israel and the entire Jewish people.”