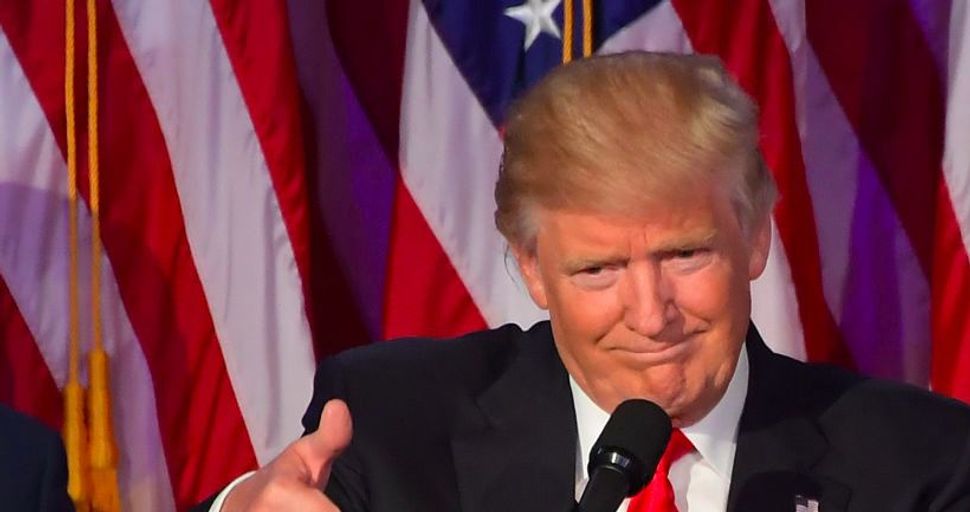 — President-elect Donald Trump’s first priority must be to “address the wounds of an extraordinarily divisive contest,” the American Jewish Committee said in a congratulatory statement.

“American democracy has spoken after a long and bitterly-fought campaign,” David Harris, the group’s CEO, said in a statement released Wednesday morning. “We wish President-elect Trump well as he prepares to assume the highest position in the land and the most powerful political position on the planet. And we also extend our best wishes to Secretary Hillary Clinton for her many years of distinguished public service to our nation, the strong campaign she ran, and, I would add, her friendship to AJC.

“The United States is one country with one destiny, and any expression of bigotry and exclusion, as we’ve regrettably seen during the extended campaign, must never be allowed to corrode our pluralistic fabric,” he said.

The AJC called on Trump to defend America’s diversity “against any further attempts to demonize or stigmatize on the basis of ethnicity, race, gender or faith,” and called for the United States to “assert strong global leadership, which only our country is capable of.”

Republican Jewish Coalition Executive Director Matthew Brooks said in a statement that the Trump victory, as well as the victory of Republicans in down-ticket races, “is a sound rejection of the failed policies of the Obama Administration.” Citing the Iran nuclear deal and the erosion of support for Israel among Democrats, Brooks added that “it’s clear the American people are ready to turn the page on the past eight years.”

Brooks noted the RJC’s assistance to Republican candidates during the campaign, ranging from raising millions of dollars to door-to-door grassroots activities.

“After a long, grueling campaign, it’s time for the nation to come together,” he said. “While there are bound to be bruises on both sides of the aisle — Republicans, Democrats, and Independents must move forward and heal our differences for the good of the country.”

The Jewish Council for Public Affairs congratulated Trump in a Wednesday morning statement and “urge(d) him to continue to work toward bringing the country together.”

“The American people have spoken,” Cheryl Fishbein, its board chair, said in a statement. “And as our great democratic tradition dictates, it’s time for a peaceful transition of power.”

The Orthodox Union in a statement said it looked forward “to working with other Americans to heal the divisions in American society and work to support policies that will move our country forward.”

“The Orthodox Union looks forward to working with President Trump and his Administration on issues of critical importance to our community, including strengthening the U.S.-Israel relationship, expanding educational opportunity and choice for all American children, defending America’s ‘first freedom’ of religious liberty and more,” the statement said.

Separately, Oded Revivi, the chief foreign envoy of the Yesha Council settlement body and mayor of the Efrat settlement, also congratulated Trump and invited him to the West Bank.

“I invite him to become the first active U.S. President to visit our flourishing communities and witness how our presence in Judea and Samaria is key to ensure a peaceful future for millions of Palestinians and Israelis,” Revivi said in a statement.

Last month, Revivi hosted several dozen Palestinians and Jewish Israelis for a peace event held in his sukkah during the harvest holiday. Four of the Palestinian men who participated in the event were arrested and held for several days by Palestinian Authority security forces.