CNN Sorry for ‘Are Jews People?’ Banner During Segment on Alt-Right White Supremacists 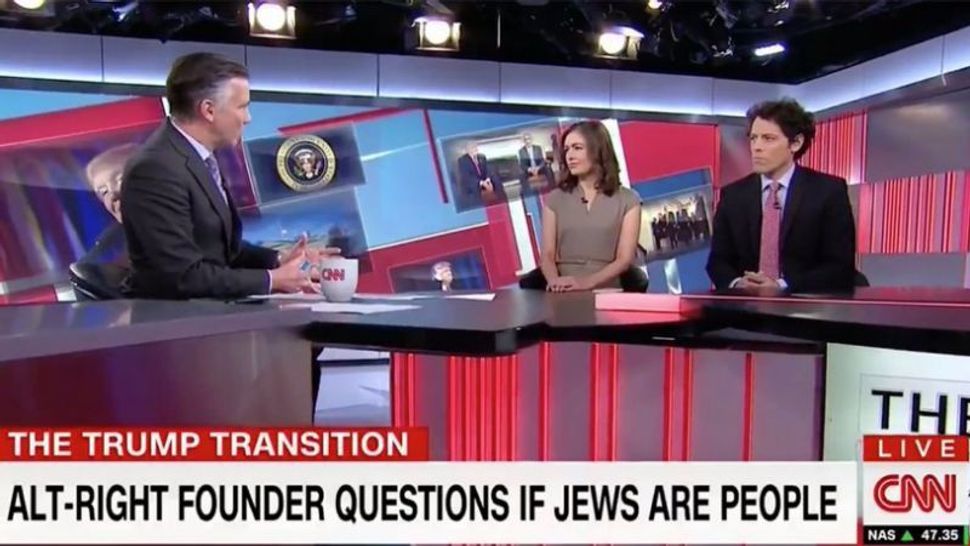 — CNN has apologized for a controversial banner flashed on the screen during a segment on white supremacist groups which read “Alt-right founder questions whether Jews are people.

The segment was aired Monday on “The Lead,” which was being guest-hosted by Jim Sciutto.

The discussion with the CNN panelists included statements made over the weekend by Richard Spencer at an event of the white supremacist think tank the National Policy Institute. Spencer said of political commentators, after suggesting that the news media had been critical of presidential candidate Donald Trump in order to protect Jewish interests: “One wonders if these people are people at all, or instead soulless golem.”

CNN said in a statement of the banner caption, called a chyron: “It was poor judgment and we very much regret it and apologize.”

The Lead’s regular host, Jake Tapper, who was on vacation, criticized the chyron in several tweets, after receiving tweets from many angry fans.

“yes, I’m off this week and I’m furious about that chyron and my staff has heard from me. Unacceptable,” read one of Tapper’s tweets.

He also tweeted in response to a complaint that the alt-right was given a platform on CNN: “they were not given a platform. The chyron was, however, unacceptable and will not happen again.”

@jsthorpe2 yes, I’m off this week and I’m furious about that chyron and my staff has heard from me. Unacceptable.

@heidiheilig they were not given a platform. The chyron was, however, unacceptable and will not happen again.

CNN Sorry for ‘Are Jews People?’ Banner During Segment on Alt-Right White Supremacists