Will Joshua Kushner’s $2.7B ‘Hipster Health’ Company Fail Under Trump? 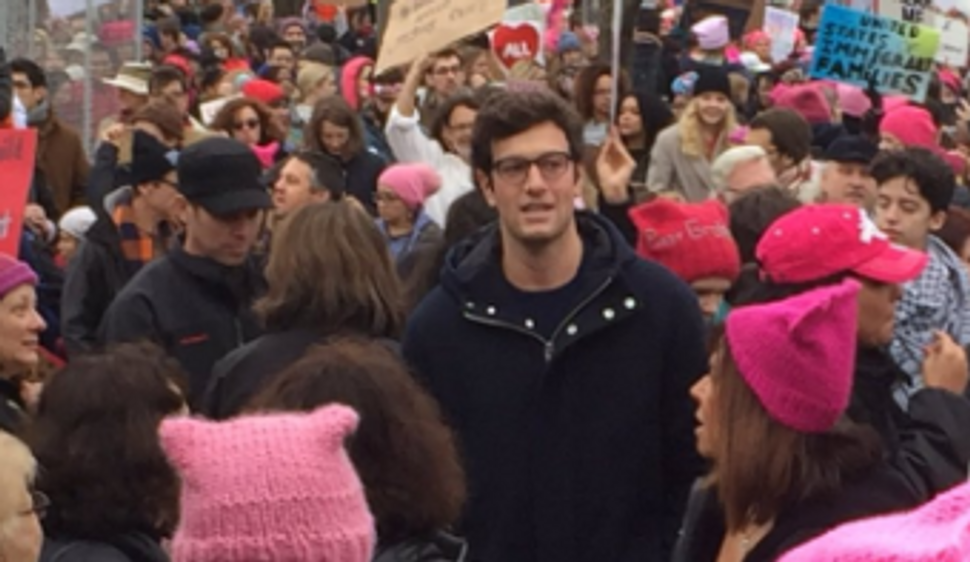 (JTA) — It might not surprise some of those who know him that Joshua Kushner, Jared Kushner’s younger brother, showed up at the Women’s March on Washington this weekend. The 31-year-old has given about $100,000 to Democratic candidates over the years, and Esquire reported in August that he was not planning to vote for Donald Trump.

Josh Kushner told fellow march attendees that he was merely “observing” the historic protest, although every move becomes scrutinized and interpreted when your older brother happens to be a senior adviser — perhaps the senior adviser — to the president.

There are no signs that there is any sort of rift between the two Kushner brothers — but that could change soon. Josh, nearly five years younger than Jared and like him a product of Orthodox day schools, is the founding owner of Oscar Health, a company worth $2.7 billion that sells health care through the Affordable Care Act — the vast Obama administration legislation that the Republican-led Congress seems most bent on dismantling. As one of Trump’s most trusted advisers, Jared could be in a unique position to influence the fate of the law known as Obamacare and, subsequently, the fate of Josh’s biggest company.

But even beyond the health care debate, the Kushner brothers’ paths have actually been diverging for some time.

Who is Joshua Kushner?

Josh Kushner is usually described by many of the adjectives used for his brother: smart, hardworking, precocious, handsome. But as Jared, 36, has risen from real estate mogul and tabloids regular to the forefront of the political scene as an adviser for his father-in-law — with all the various attention, scrutiny and gossip that brings — Josh has managed to stay almost completely out of the limelight, despite his own high-profile business ventures and relationship with supermodel Karlie Kloss.

While Jared continued to grow the family’s lucrative real estate business — founded by their grandfather, a Holocaust survivor — Josh broke into the tech world. As a junior at Harvard, Josh started Vostu, a company that makes video games for social networks like Facebook. After graduating, he founded Unithrive, which helped Harvard students obtain loans from wealthy alumni. When those companies faltered, he began investing in upcoming tech companies.

By 2010, while at Harvard Business School, Josh formed Thrive Capital — a technology investment fund that has become one of the biggest of its kind. Thrive, which now manages approximately $1.5 billion, has invested in upward-trending companies such as Instagram, Spotify, Jet.com, Slack and Warby Parker. Josh co-founded Oscar Health in 2013.

Like most of the rest of his family, Josh has quietly been a lifelong supporter of the Democratic Party. The New York Times noted that he began giving money to Democratic candidates during the 2000 presidential campaign, when he supported Bill Bradley and then Al Gore. But he has not made any political donations since 2014 — well before Trump’s rise to prominence. Kloss made public her support for Hillary Clinton.

The day after being spotted at the Women’s March on Washington, Josh was photographed with his brother in the White House. The Times reported that he has no interest in getting into politics.

Why things could get awkward

When Josh sprained his ankle in 2012, he was frustrated that he had no access to the records describing his case. So he set out to do what many others only dream of doing: founding a startup aimed at making the American health care system easier to navigate.

Josh founded Oscar Health, nicknamed the “hipster health insurance” provider partly due to its colorful ads and appeal to millennials, along with Mario Schlosser in 2013. (It was named after Kushner’s great-grandfather.) The company allows customers to have video consultations with doctors and utilizes an app to help patients communicate their health status to their doctors more efficiently. It has carved out a market large enough to intrigue investors and raise hundreds of millions in funding, but has struggled to make a profit and extend its services outside of New York.

Now Oscar’s core customer base — individuals seeking insurance outside of their employer or the government — is in jeopardy. If Congress repeals the Affordable Care Act, no one can foresee the fate of individual insurance plans. Unsurprisingly, Oscar executives reject talk that the company will go under if Obamacare is repealed.

Nevertheless, if a repeal happens, Jared Kushner will be at the center of the administration backing the ACA’s demise. (Another awkward relationship: Peter Thiel, a Silicon Valley billionaire and avid Trump supporter, has invested in Oscar.)

But unlike Jared, who inherited and expanded a family business led by his father and grandfather, Josh has clearly sought to forge a different path.

Esquire reported that Josh used to attend the weekly Kushner Companies meetings even though he wasn’t involved in the real estate business, but that he hasn’t regularly shown up for years. In turn, Jared has stopped making frequent visits to the Thrive Capital offices.

“I think there was a little source of tension with other partners at Thrive who felt like, you know, Jared swooning in and swooning out was not very constructive,” a source told Esquire.

So who knows — perhaps Josh’s appearance at the Women’s March means more than we think.

Will Joshua Kushner’s $2.7B ‘Hipster Health’ Company Fail Under Trump?