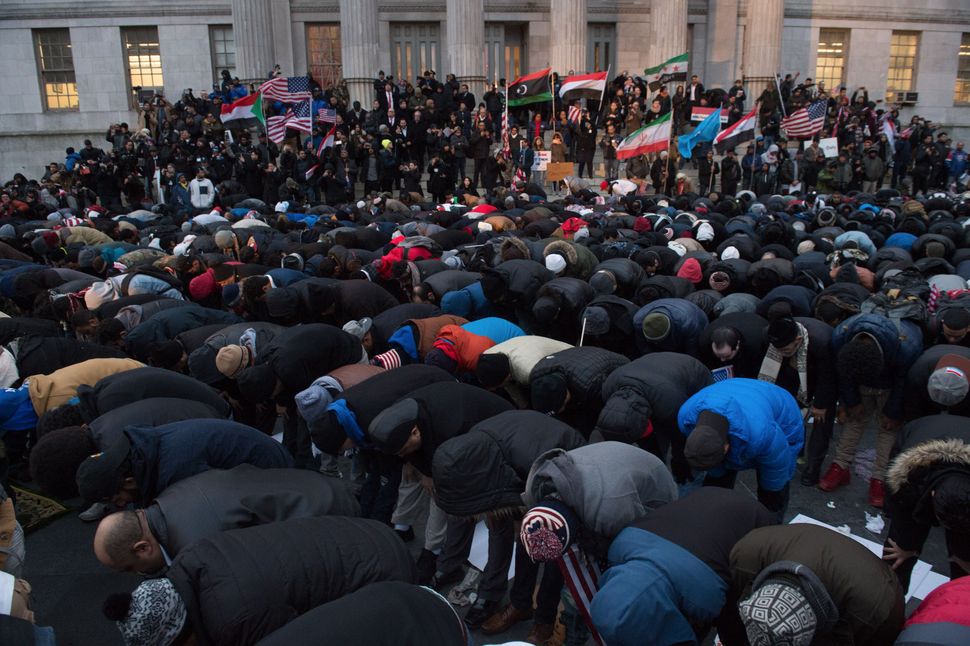 NEW YORK (JTA) — It’s not uncommon to see Hasidic Jews in Day N Night, a Yemenite-owned corner store in Boro Park, Brooklyn. In fact, the shop caters to the many Orthodox Jewish customers who live in the neighborhood by selling Hebrew and Yiddish-language newspapers and allowing observant Jews to buy things on tab on Shabbat and Jewish holidays, when religious law forbids them from handling money.

But on Thursday, one Hasidic Boro Park resident came in for a different purpose: to show his support for a strike by Yemenite-American bodega owners protesting President Donald Trump’s executive order banning refugees and immigrants from seven predominantly Muslim countries, including Yemen. Over 1,000 Yemeni-American owned bodegas, grocers and other businesses across New York City shut their doors on Thursday from around noon to 8 p.m.

“I made a point of walking in there today — I actually live a mile away,” Alex Rapaport, the executive director of the kosher Masbia soup kitchen network, told JTA. “I just learned that they were Yemenite, and I was looking to do something in solidarity with the people affected by the executive order.”

Today I am in support of the #YemeniteBodega in #BoroPark!

The store owners “were very excited” to see him, said.

Later that day, Rapaport and a number of community members put post-it notes with “messages of love and solidarity” on the storefront.

Some shared their support on social media.

Showing my support for our neighbors, we are in together. We feel each other. Religions don’t fight, people mistakenly do. #bodegaStrike pic.twitter.com/zEVHO09SpB

As a hasidic jew I felt the importance to stop by at my local bodega to show support 4 #MyYemeniNeighbor Sami & Mohammad. #BodegaStrike

It wasn’t the first time the 38-year-old father of seven expressed support for his Muslim neighbors. In December 2015, Rapaport attended a protest at New York’s City Hall following Trump’s call for “a total and complete shutdown of Muslims entering the United States.”

“Being a visible Jew in New York City, where I’ve been spat at, I’ve been yelled at and cursed at, I know exactly what hate means,” he said. “And to see this happening in an official capacity with no sensible real need for it, it forces me to call it out for what it is.”