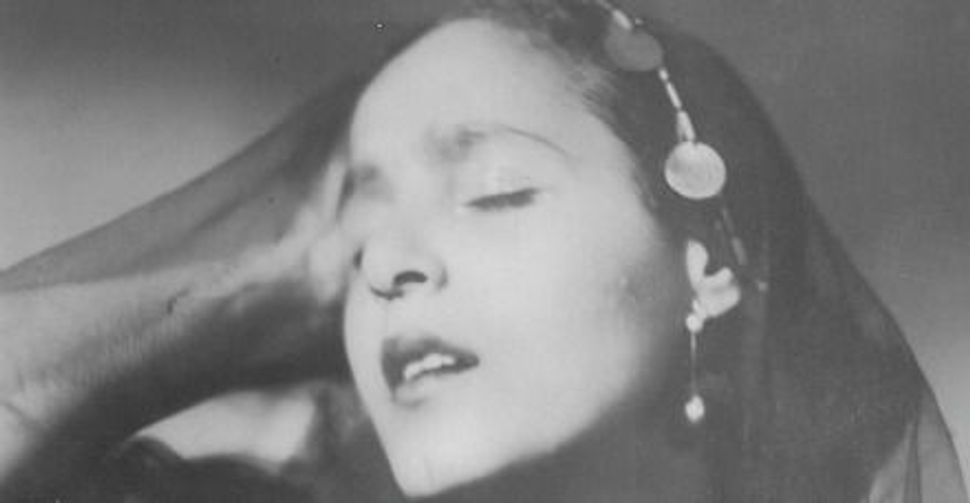 Occasionally titled a “Palestinian diseuse” as well as a “dancing actress” Halevy was a multi-lingual talent who gave interpretive performances in Hebrew, Yemenite, Persian, Arabic, Ladino, Russian and Yiddish. Arriving in New York City from her native Yemen in the 1930’s through the auspices of famous Jewish impresario Sol Hurok, Halevy was among the original women performers of the Middle Eastern cultural roots music and dance.

She introduced mostly Ashkenazi Yiddish speaking audiences to the deep folkloric riches of Jewish Arabic culture and Palestinian children’s songs in a manner also reflective of early romantic Zionism. Her premiere in New York City was at the Astor Theatre on Broadway and 45th Street (currently the Marriot Marquis Hotel) where she appeared at the 1935 premiere of the film “Land of Promise”, which is considered the first sound film about Jewish pioneers of Palestine.

Her repertoire frequently referenced women of the bible such as Deborah or the matriarch Rachel. In one piece she reportedly even used an offstage men’s chorus to set a rhythmic counterpoint to her own on stage melodic recitations.

Considered striking, with graceful hand gestures that spoke volumes, her costuming was made up of silks and brocades styled to suit the Middle Eastern themes of her work. She frequently performed in drag as a Yemenite boy in traditional garb singing a deeply melancholic type of song of sadness. On stage she both sang and recited in a repetitive poetic manner accompanied by sections of piano melody. She performed in New York City’s Town Hall as early as 1936, and the 92nd Street Y in the late 1940’s.

It was said that Halevy considered her true artistic calling to be that of a mime. She can be seen as the foundational link in a brilliant chain of powerfully talented Yemenite Jewish women artists that includes the late Israeli chanteuse Shoshana Damari and the sensationally popular Ofra Haza who brought Yemenite music to the clubs and whose tragic death at the young age of 42 of AIDS-related pneumonia put her legions of fans in a permanent funk.

Looking back at this photo in our archive, it’s thrilling to note how Halevy’s unique contributions took root here in New York City, where she chose to settle and where she eventually died at the age of 62.