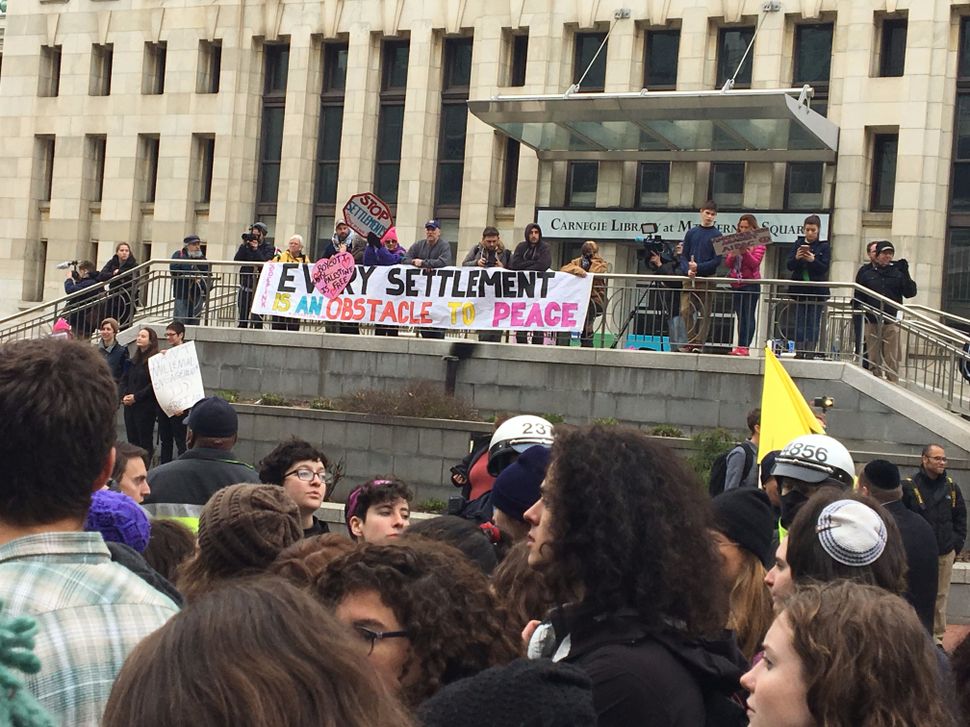 Hundreds of Jewish activists marched outside and blocked the entrances of the largest pro-Israel conference of the year to oppose what they say is support for Israel’s mistreatment of Palestinians, even as several members claimed they were rejected from the conference because of their political views.

“We’re proving the consensus is changing in the American Jewish community,” said protester Ethan Miller, “and if AIPAC wants to continue speaking for our community they’re going to have to change as well.”

Young Jews blocking the entrance to #AIPAC2017 to stand up for freedom and dignity for all Israelis and Palestinians! #JewishResistance pic.twitter.com/ggpBDp1Lh4

The America Israel Public Affairs Committee held their three-day Policy Conference as the Trump administration upends decades of American orthodoxy in the Middle East. Earlier this week, the Senate confirmed outspoken settlement fundraiser David Friedman as U.S. ambassador to Israel. Friedman has lashed out against the dovish group J Street, calling its members “worse then kapos,” a reference to Jews who were complicit with Nazi wardens during the Holocaust. President Donald Trump also appeared to back off from a commitment to the two-state solution in a recent press conference with Israeli Prime Minister Benjamin Netanyahu. The shift in policy comes as a relief to some supporters of Israel, who bristled at former President Barack Obama’s open criticism of settlement construction, and who doubted the wisdom of the deal Obama orchestrated to lift sanctions on Iran in exchange for Tehran’s agreement to curtail its nuclear program. 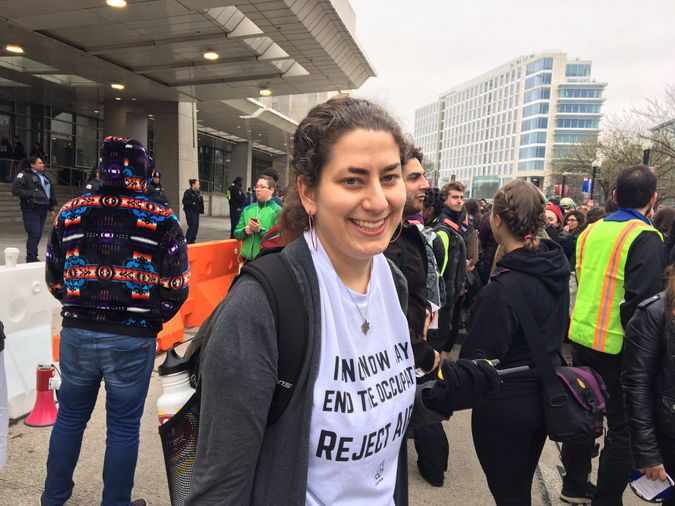 “I have family that’s inside that building right now and I love them dearly,” said IfNotNow activist Sarah Brammer-Shley. But, she added, “AIPAC’s support of the occupation, AIPAC’s support of bigotry and AIPAC cozying up to the Trump administration, that’s not going to keep us safe.”

As they protested outside, shouting “If not now, when?” and waving blue banners to symbolize a parting of the seas, some activists said they were rejected from participating in the convention in what they believe was a political move.

One of them, who asked not to be identified by name, provided the Forward with an email exchange she had with AIPAC, in which she was informed her registration to the policy conference had been canceled and her participation fee would be returned. “Thank you for your interest in attending the AIPAC Policy Conference,” the email read. “Upon further review of your registration materials, we have determined that we will not be issuing you credentials to attend this private membership event.” AIPAC did not provide a reason for revoking the credentials, but the person believes it had to do with her IfNotNow activism. Several other Jewish activists involved with IfNotNow received similar notices from AIPAC, informing them they will not be allowed to participate in the conference.

AIPAC made clear that fees will be returned to all those who were denied credentials. Spokesman Marhsall Wittmann declined to comment on the issue.

About a dozen supporters of the assassinated far-right leader Meir Kahane opposed the far larger crowd of anti-AIPAC marchers.

AIPAC organizers made an effort to invite some critics of Israel’s policy toward the Palestinians, including a representative from the liberal Israel Policy Forum, and Israeli lawmaker Tamar Zandberg, of the left-leaning Meretz party. She joined the IfNotNow protesters outside.

Member of Knesset Tamar Zandberg came outside to be with the #JewishResistance. Tamar, thank you for standing with IfNotNow. pic.twitter.com/P9v2xKmgOW