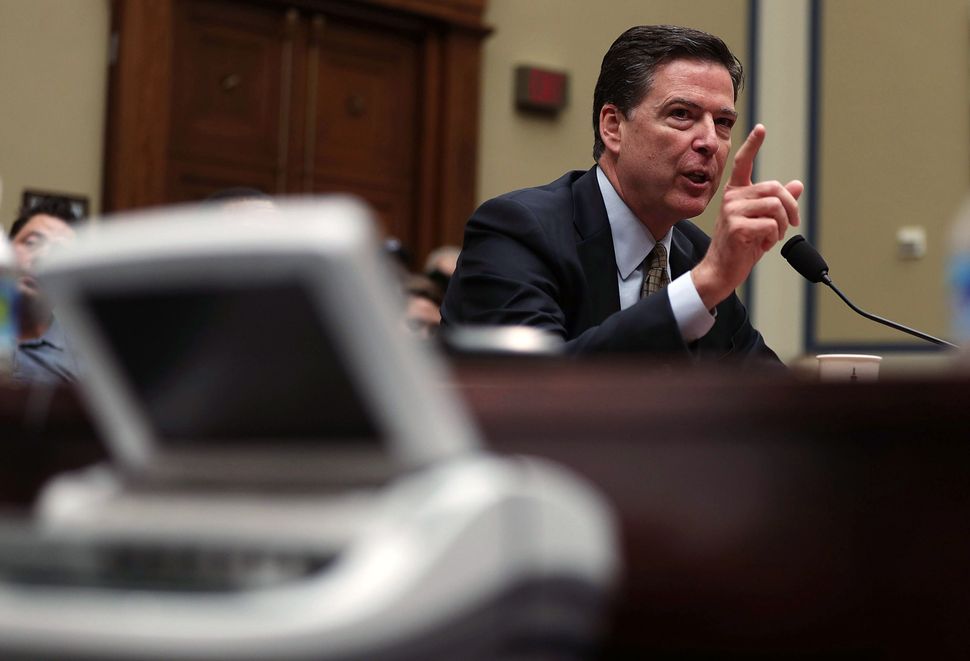 WASHINGTON (JTA) — “You make us better,” James Comey told the Anti-Defamation League in his final public speech as FBI director. Judging from the applause in the conference room at Washington D.C.’s venerable Mayflower Hotel, the feeling was mutual.

Democrats called for Comey’s firing last year when a week and a half before the election he reopened the Clinton case because of emails found on former congressman Anthony Weiner’s laptop in an unrelated case.

President Donald Trump (who repeatedly praised the FBI director as a candidate) fired Comey on Tuesday, ostensibly because Comey treated Clinton unfairly last July when he excoriated her for her email habits in a press conference (but recommended against legal action). The firing, however, was drawing attention for its timing: Comey is delving into ties between Trump campaign and transition officials who may have had ties to Russia.

But among the folks whose business it is to keep Jews safe – like those gathered Monday in the Mayflower for the ADL’s leadership summit – admiration for Comey was fairly unequivocal. To a degree greater than most of his predecessors, he made the Jewish story central to the FBI mission.

Comey required all FBI staffers to undergo a tour of the U.S. Holocaust Memorial Museum.

“Good people helped to murder millions. And that’s the most frightening lesson of all,” he told a museum dinner in 2015. “That is why I send our agents and our analysts to the museum. I want them to stare at us and realize our capacity for rationalization and moral surrender.”

Comey, already known as a persuasive speaker, was especially adept at understanding what moved Jewish Americans. In his ADL speech this week, he recalled meeting a man who was not far from the scene when a gunman opened fire last June at a gay nightclub in Orlando, Fla.

“My name is Menachem Green and I’m Jewish,” Comey quoted the man as saying (pronouncing Menachem impeccably) and went on to say Menachem Green was pleased to tell him that he ran toward the shooting alongside a police officer he learned was a Muslim.

“We were Jew and Muslim and Christian and white and black and Latino running to help people we didn’t know,” he said. He also recalled the “Muslim activists who raised over $100,000 to repair Jewish headstones in St. Louis and Philadelphia – that makes us better.”

Comey also embraced one of the ADL’s signature issues, improving reporting of hate crimes by local authorities. “We must do a better job of tracking and reporting hate crime to fully understand what is happening in our country so we can stop it,” he said.

Just a week earlier, Comey was due to receive a recognition award from Secure Community Network, the security affiliate of the Jewish Federations of North America. Paul Goldenberg, the SCN director, said Comey was to be recognized for his work with the community in tracking down the perpetrator of dozens of bomb hoaxes on JCCs and other Jewish institutions.

“Director Comey put in extraordinary resources and showed tremendous commitment to the American Jewish community,” noting that the agency had deployed agents to Jewish communities across the states.

Comey could not personally accept the recognition, and SCN delivered it to a surrogate – but this was because Comey was on the Hill, testifying to the Senate about how he handled the email and Russia scandals.

He noted in his testimony one of the FBI triumphs of recent months as a defense of the agency – helping to solve the JCC bomb threats.

In March, an Israeli-American teen was arrested in Israel on suspicion of calling in more than 100 bomb threats. Last month, the U.S. Justice Department charged the teen, Michael Kadar, with making threatening calls to JCCs in Florida, conveying false information to the police and cyberstalking.

“Working across all programs, all divisions, our technical wizards, using our vital international presence and using our partnerships especially with the Israeli national police, we made that case and the Israelis locked up the person behind those threats and stopped the terrifying plague against the Jewish community centers,” Comey said.

Comey may be gone, but the shock among Democrats – and some congressional Republicans — at his departure means his memory is unlikely to fade anytime soon.

“We must have a special prosecutor,” Sen. Chuck Schumer, D-N.Y., the minority leader in the Senate, said in a statement delievered at a brieifing for reporters late on Tueday. He said he had told Trump in a phone call that firing Comey was a “very big mistake.”

Trump fired back at Schumer on Twitter, recalling that Schumer had recently said that he did nit have confidence in Comey. “Then acts so indignant,” Trump said of Schumer.

Cryin’ Chuck Schumer stated recently, “I do not have confidence in him (James Comey) any longer.” Then acts so indignant. #draintheswamp

Rep. Adam Schiff, D-Calif., the ranking Democrat on the U.S. House of Representatives Intelligence Committee, which is also probing the Trump campaign’s Russia ties, said there was no contradiction between being appalled at Comey’s handling of the Clinton case and also at Comey’s firing.

He noted that Attorney General Jeff Sessions, who has recused himself from the Russia investigation because he had met with a Russian diplomat during the transition, had signed off on the firing.

“The decision by a President whose campaign associates are under investigation by the FBI for collusion with Russia to fire the man overseeing that investigation, upon the recommendation of an Attorney General who has recused himself from that investigation, raises profound questions about whether the White House is brazenly interfering in a criminal matter,” he said.