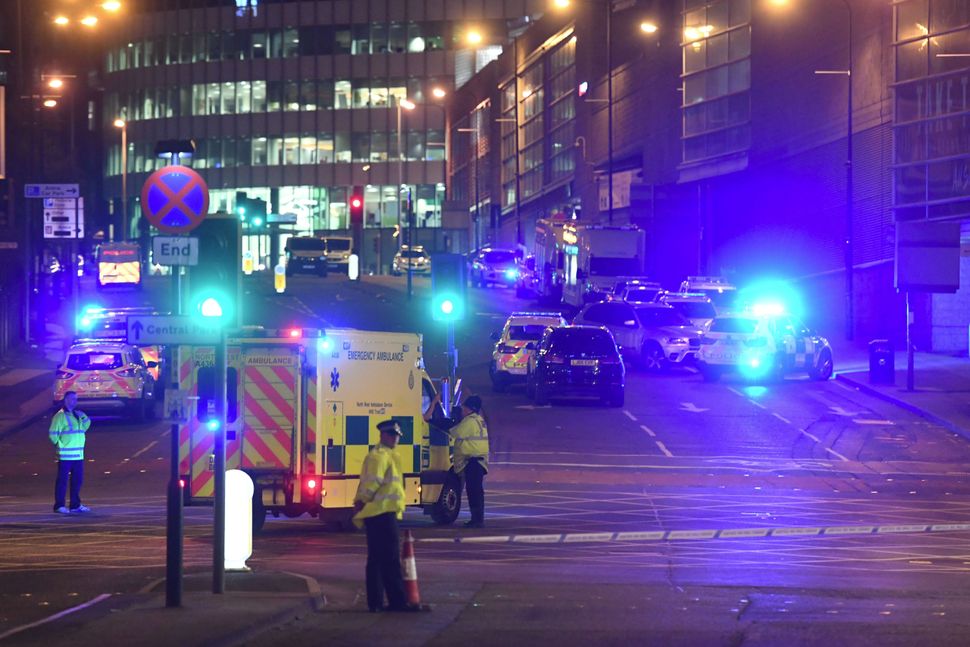 Emergency response vehicles are parked at the scene of a terrorist attack during a concert by Ariana Grande in Manchester, England, May 23, 2017. Image by Getty

Yet one day after the deadly bombing in Manchester, Cohen told JTA he has no intention of changing security arrangements at his congregation.

In fact Cohen, a Chabad emissary who works in a Jewish enclave in the northern part of the city surrounded by a heavily Muslim area, said there is little room for improving security across his tight-knit community.

After all, the Jewish community in Manchester — one of the U.K.’s fastest-growing spots thanks to an influx of immigrants and young couples seeking alternatives to pricey London — has been on its highest alert since long before the explosion that killed 22 people and wounded 50 at an Ariana Grande concert. On Tuesday, ISIS claimed responsibility for the act.

“Well, the radio equipment is working, the residents have been briefed, police are patrolling, security professionals from the Jewish community have been in place since the attacks in Belgium” last year, Cohen said when asked about security. “There is only so much you can do – except pray.”

On Kings Road, a busy street of the heavily Jewish borough of Prestwich, residents keep an eye out for strangers. Any abnormal behavior – particularly photography or the gathering of information — quickly invites polite but firm inquiries by both passers-by as well as shopkeepers who cater to the local population of Haredi and modern Orthodox Jews.

The vigilance in Jewish Manchester owes much of its preparation and training to the local police, the Community Security Trust organization and other groups. But it is also born of circumstance: Manchester’s some 30,000 Jews are concentrated in a relatively small area. This makes them an easy target, but it also means that the community’s institutions are easier to protect and vigilance is easier to instill.

While there are also concentrations of Jews in North London, Manchester — a city of 2.5 million, where 15.8 percent of the population is Muslim — has added tension because the Jewish and Muslim communities live in close proximity. Kings Road, for example, is sandwiched between the Judaica World bookstore on its western end and the Masjid Bilal mosque on its eastern one.

This juxtaposition in recent years has generated some friction, including in the harassment of Jews on the street and the occasional violent incident.

At least one more premeditated plan to attack Manchester Jews was uncovered and foiled five years ago. In 2012, a British judge imprisoned a Muslim couple, Mohammed Sajid  and Shasta Khan, for seven years for gathering intelligence on Manchester Jews for an attack.

“That incident came at a time of reassessment about the threat to Jews in Manchester, and it was one of the reasons that led to a complete overhaul,” Cohen said.

“So today, we in the Jewish community are perhaps less surprised than others at what happened,” the rabbi added, though he also said that Mancunian Jews are “shocked at the horror” witnessed at the concert.

Paul Harris, editor of the city’s Jewish Telegraph weekly, told JTA he generally agrees that Manchester’s Jewish community is well prepared to deal with any emergency or fallout thereof, but he also flagged one weak point: On evenings and afternoons, observant Jews in the city congregate outside synagogue — a habit that makes them an easy target and which, for that reason, has largely been abandoned in at-risk communities in France and beyond.

In a statement Tuesday following a suspect’s arrest, Prime Minister Theresa May said the bombing was a “callous terrorist attack” that targeted “defenseless young people.” Police believe a homemade explosive vest was detonated by a suicide bomber who may or may not have been working alone.

The explosion ripped through the 21,000-seat Manchester Arena at 10:30 p.m. after Grande, a 23-year-old pop singer from the United States, had already left the stage. At least 12 of the 22 killed in the attack were children younger than 16. News of the explosion sent worried parents to the arena, where children, teenagers and young adults streamed out of the main exit in a state of panic.

Cohen said that Chabad was not aware of Jewish fatalities in the attack.

The attack happened a little over two weeks before the June 8 general election in which hardliner Theresa May from the Conservative Party is running against Jeremy Corbyn, leader of the Labour Party. The attack may further increase May’s lead in the polls on Corbyn, a left-leaning promoter of outreach to Muslims who has called Hezbollah and Hamas his friends.

Last year Corbyn — amid intense criticism in the media and from members of his own party for his perceived failures in curbing expressions of anti-Semitism within Labour’s ranks — said he regretted expressing affection to the two Islamist terror groups. Following the attack Monday, all parties agreed to suspend campaigning for three days.

Israeli Prime Minister Benjamin Netanyahu at a joint news conference Tuesday in Jerusalem with President Donald Trump, who was visiting Israel, referenced the attack in criticizing incitement to terrorism by the Palestinian Authority under its president, Mahmoud Abbas.

“President Abbas condemned the horrific attack in Manchester,” Netanyahu said while standing next to Trump. “Well, I hope this heralds a real change, because if the attacker had been Palestinian and the victims had been Israeli children, the suicide bomber’s family would have received a stipend from the Palestinian Authority. That’s Palestinian law. That law must be changed.”

Speaking in Bethlehem, Trump joined other world leaders who condemned the attack.

“I won’t call them monsters because they would like that term. I will call them losers,” he said.

Back in Manchester, Rabbi Shneur Cohen of the Chabad Manchester Center City organized a food and drinks distribution to police officers who were stationed outside the arena where the attack took place.

“We are Manchester, we stand together,” Cohen told reporters at the scene.

But Harris, the Jewish Telegraph editor, said that despite such gestures, “there is definitely a silence, a shocked silence” in the city following the attack.