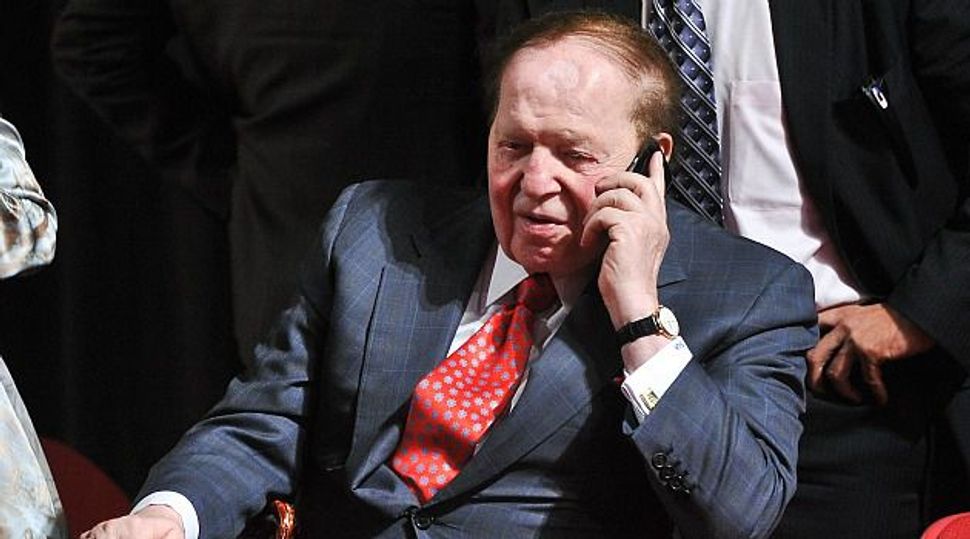 Caught off-guard by a radio show call, Israel Hayom chief editor Boaz Bismuth insisted that his decision to run a scathing, front-page attack on Prime Minister Benjamin Netanyahu was not a result of orders he had received from the big boss in Las Vegas.

“I did not get a phone call from Sheldon Adelson,” Bismuth insisted, arguing that the article ripping Netanyahu’s decision to dismantle metal detectors from Temple Mount entrances showed he was “feeble and frightened,” was in line with the paper’s editorial position and had nothing to do with the tense relationship among Adelson, Israel Hayom’s publisher and the Israeli leader.

But not many seemed to buy into Bismuth’s line of defense. Most commentators saw the move as a clear reflection of a rift that’s growing because in Israel — unlike in the United States — Adelson has his pick of politicians to patronize.

Sources of the divide go back several months, to a police investigation revealing that Netanyahu had met in private with Arnon Moses, the publisher of Yediot Aharonot and Adelson’s archrival in the market of Israeli dailies.

In the meeting, Netanyahu reportedly discussed imposing limitations on Adelson’s Israel Hayom, which is distributed free of charge, in return for positive coverage in Yediot. Adelson naturally interpreted the move as an expression of disloyalty on behalf of Netanyahu, who was willing to throw him under the bus in order to win favor with the rival publication.

Ever since, Israel Hayom’s coverage of Netanyahu has changed. The number of fluff stories featuring Netanyahu and his wife, Sara Netanyahu, dropped, front-page photos of the Israeli leader became more scarce, and the more negative trend culminated in the headline criticizing Netanyahu on the front page of Wednesday’s paper. Israeli pundits quipped that Israel Hayom is no longer the “Bibiton” – Bibi’s newspaper, but is now “Bennetton” – the paper of Naftali Bennett, leader of Israel’s right-wing Jewish Home party.

Miki Rosenthal, a Zionist Union member of the Knesset who was a senior editor at Yediot for years, tweeted Wednesday morning: “Israel Hayom has returned to the family of journalism. Welcome back.”

An Israeli political source close to the Likud told the Forward that the rift between Adelson and Netanyahu is personal, not ideological. Adelson’s beliefs on Israel mesh with those of Netanyahu, who sits in the center right, or with Bennett, who is even further to the right. “There is nothing Bibi can give Adelson that Bennett cannot,” the source said.

Adelson’s cold shoulder to Netanyahu did not surprise those who have known the Republican mega-donor for years. He famously shut the spigot of financial support for the American Israel Public Affairs Committee a decade ago after disagreeing with the pro-Israel lobby’s position supportive of a two-state solution. During the recent election cycle, Adelson made clear throughout the early stages of the Republican primaries that he did not wish to see Donald Trump win the nomination, but then, when it became apparent that Trump would be the one leading the party to the 2016 elections, Adelson changed course and became his biggest supporter.

“It’s not about the people, it’s about the interests,” said a major Jewish Republican donor who asked not to be named. “In Israel, his interest is to make sure [the party] stays strong against its enemies and he’ll support the best leader for that job.”

Should Adelson’s turn against Netanyahu serve as a warning sign to Trump?

Here, the situation could be different.

While Israel’s political system allows for a variety of political parties to compete over the right-of-center vote, the U.S. two-party system leaves megadonors like Adelson with fewer options. Adelson, whose interests range from supporting Israel to banning online gambling and fighting against legalization of marijuana, must support Trump and the Republican Party.

And while Netanyahu and Adelson did not comment on the state of their relationship, a legal twist could, in fact, turn this distancing into a valuable asset for Netanyahu. According to a report Wednesday on Israel’s Channel 10 TV news, the state comptroller’s office is now looking into the nature of the ties between Netanyahu and Israel Hayom since the paper was established a decade ago. If the comptroller finds a direct link, the report stated, Netanyahu could face legal action for breaking election funding laws. A well-publicized dispute with the newspaper could help the Israel leader refute claims of an improper direct link to the publication.