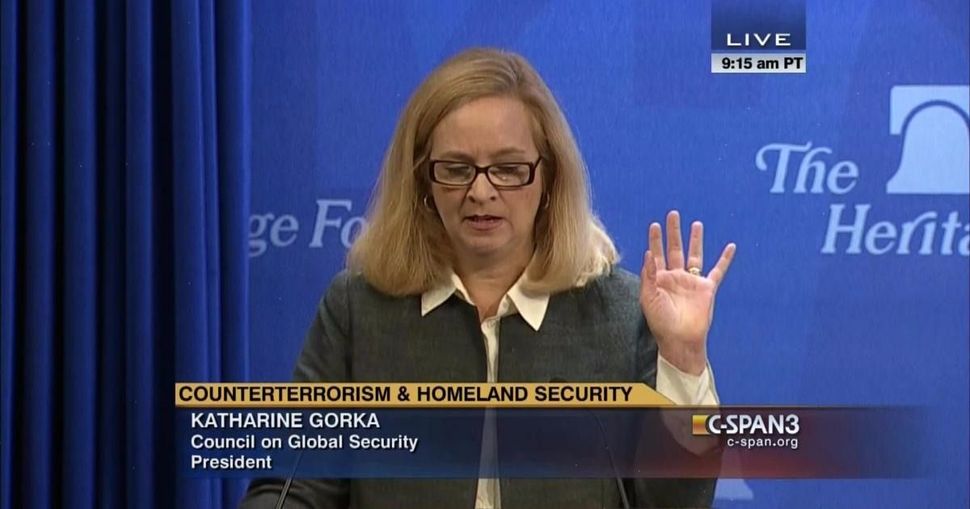 Katharine Gorka works for the United States government, as does her husband, Sebastian Gorka. Image by Screenshot

A group working to de-radicalize white supremacists had been set to receive funding from the Department of Homeland Security until Trump aide Katharine Gorka worked to eliminate its grant.

Gorka, a homeland security official and the wife of controversial White House counterterrorism adviser Sebastian Gorka, was a member of President Trump’s transition team before his inauguration. As the Forward reported in May, she met with Homeland Security officials in December and told them that Trump didn’t agree with the Obama administration’s approach to funding Countering Violent Extremism programs.

Domestic terrorism perpetrated by white nationalist groups has been at the center of attention in recent days, following the Charlottesville, Virginia, protests and the deadly car attack carried out by an activist in one of these groups. However, under the Trump administration, funding for efforts to counter these groups has been slashed, as one organization learned a couple of months ago.

Life After Hate, an organization devoted to reforming violent extremists, mainly members of white supremacy groups, was about to expand its operations, following a spike in calls since the elections, from people reaching out to seek help for their loved ones. The group applied for a $400,000 federal grant for a program that would proactively seek out violent extremists through the internet and reach out to them to offer help. But the request, filed in the final weeks of the Obama administration, was eventually denied. Homeland Security grants worth $10 million were provided exclusively to groups dealing with Islamic extremism.

“Given the last election cycle, people have much greater awareness and a lot more concern to violent extremism,” said Tony McAleer, the group’s co-founder and board chair, in a May interview. The display of white nationalism hate groups supporting the Trump campaign, he explained, brought attention to the issue and led some to seek help for friends involved in these organization. Needless to say that recent events in Charlottesville have highlighted the need for program aimed at reforming white nationalist extremists.

Behind the denial of grants to white nationalist de-radicalization programs stands a new policy of the Trump administration seeking to narrow the definition of violent extremism, and one top aide, Katharine Gorka, who worked during the presidential transition to ensure that this policy plays out in daily homeland security operations.

During the presidential transition period, a team headed by Gorka reached out to DHS and the State Department and asked for names of employees working on the issue. The transition team suggested defining their mission as “countering radical Islamist extremism” rather than “countering violent extremism,” a shift indicative of the narrower focus the new administration has chosen.

As a result, CVE grants were put on hold, and eventually released only to groups whose work fit the new definition, excluding programs directed at white extremists.

“Their people talk about terrorism only in the context of Islamic extremism,” said Heidi Beirich, director of the intelligence project at the Southern Poverty Law Center. “It seems pretty clear that Trump doesn’t care about other types of extremism.”

But existing data on violent extremism in the United States does not support the Trump administration’s narrow approach to the problem.

An analysis prepared by START, a national consortium for the study of terrorism, supported by the Department of Homeland Security and based at the University of Maryland, looked at Islamist and far-right homicides in the U.S. in the past 15 years. The study excluded two outliers – the 9/11 terror attacks and the Oklahoma City bombing, and found that far-right extremists have killed more than double the people than Islamist extremists – 272 compared to 130. “To focus solely on Islamist extremism is to ignore the murders perpetrated by the extreme far right and their place in a constantly changing threat environment,” concluded a February 2017 research paper compiled by scholars affiliated with START.

“It’s probably short-sighted to only focus on Islamist extremists,” said Peter Weinberger who heads the counter violent extremism program at START. He noted that not only do the numbers show the danger of far-right extremism, but also that dealing with extremists from the right could provide tools and information to help counter Islamist extremism.

The Obama administration, though in a belated fashion, recognized a more inclusive view of violent extremism, coining the acronym CVE, for Countering Violent Extremism. In doing so, the administration effectively eliminated the ideological motivation of the violent extremists groups and thus bundled together far-right white supremacists with Al-Qaeda and ISIS inspired Islamists.

The program offered by Life After Hate, and rejected by Trump’s administration, was a joint effort with a technology company aimed at identifying individuals involved in violent extremism and reaching out to them. The idea was to find extremists based on their online activity and to draw them away from these groups, before they resort to violence.The group is now reaching out to private donors in place of the government funding, and has already landed a $50,000 contribution from NFL star Colin Kaepernick.

McAleer knows first hand how difficult it is to leave violent extremist groups. He was a member of the White Arian Resistance, helped recruit skinheads, and was the manager of a racist rock band. After the birth of his child, McAleer decided to turn his back on the far-right groups he was affiliated with and to open a new page in his life, but the powerful network of support they provided made it ever more difficult. Eventually it was a Jewish therapist who brought him out. “He heard my story and said: ‘you know I was born Jewish,’ and here he was, helping a person who hated Jews all his life,” McAleer recalled.

Organizations working to reform violent extremists are based on a European model which was originally designed to rehabilitate former neo-Nazis and is being used in recent years to bring back into society Europeans who were drawn to ISIS. “We know that the most effective people to bring these people out are ‘formers,’” said Weinberger, “so it’s important we create a critical mass of people who can do it. This is key from a perspective of national security.

James Alex Fields Jr., the 20-year-old Ohio resident who rammed his car into the crowd in Charlottesville, was associated with Vanguard America, a known white supremacists hate group.