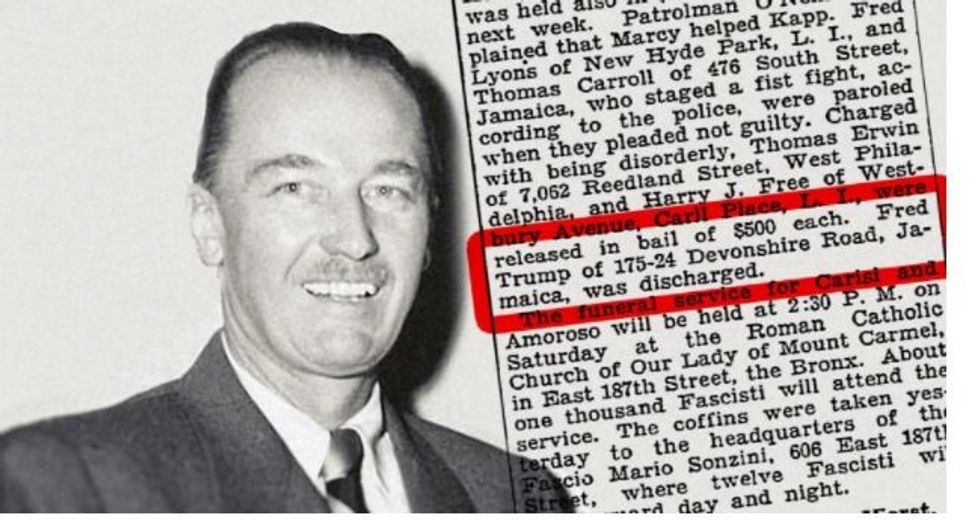 Some journalists looking for clues to Donald Trump’s sometimes conflicted attitudes toward the Ku Klux Klan have pointed to his family history — including the fact that Trump’s father was once arrested at a Ku Klux Klan rally in Queens.

There’s no evidence that Fred Trump Jr. was ever a member of the white supremacist organization. And Trump himself denies his father was even at the rally.

But according to a New York Times article published on June 1, 1927, a man with the name and address of Donald Trump’s father was arraigned after Klan members at a Memorial Day rally attacked cops in Jamaica, Queens.

The old Times story, first unearthed by the technology website Boing Boing in September 2015, reports that Fred Trump, of 175-24 Devonshire Road, was one of seven men arrested at the rally for allegedly brawling with cops at the parade. His case, however, was discharged at the arraignment.

After the arrests, the Klan leafleted the Queens neighborhood with broadsides denouncing the New York City Police Department, under the headline: “Americans Assaulted By Roman Catholic Police of New York City!”

“Native born Protestant Americans,” the leaflets decried, are “clubbed and beaten when they exercise their rights in the country of their birth.”

No one in authority at the time said, “I think there is blame on both sides.”

Instead, Police Chief Joseph Warren told the press he favored fewer “extraneous” parades in the city on Memorial Day, citing another parade organized by black shirted Italian pro-fascists that also required police attention the same day. Two of the fascists were killed on their way to the parade by apparent anti-fascists. Warren said he supported the main Memorial Day parade in Manhattan, but “class” parades for “this, that and the other thing” seriously diverted police resources.

Fred Trump’s role in the Queens parade, remains murky. And there is no evidence of his membership in the Klan. In 1973, however, the Justice Department sued Fred Trump and Donald Trump for allegedly barring blacks from the rentals they ran as chairman and president, respectively, of Trump Management. A New York Times investigation later found “a long history of racial bias” at the Trump family firm’s properties. Much earlier than that, folk icon Woody Guthrie denounced “Old Man Trump” in a poem and later, a song, for discriminating against African Americans at a Coney Island property in which Guthrie himself lived.

As for Fred Trump’s presence at that Klan Memorial Day parade, the current occupant of the White House considers it fake news.