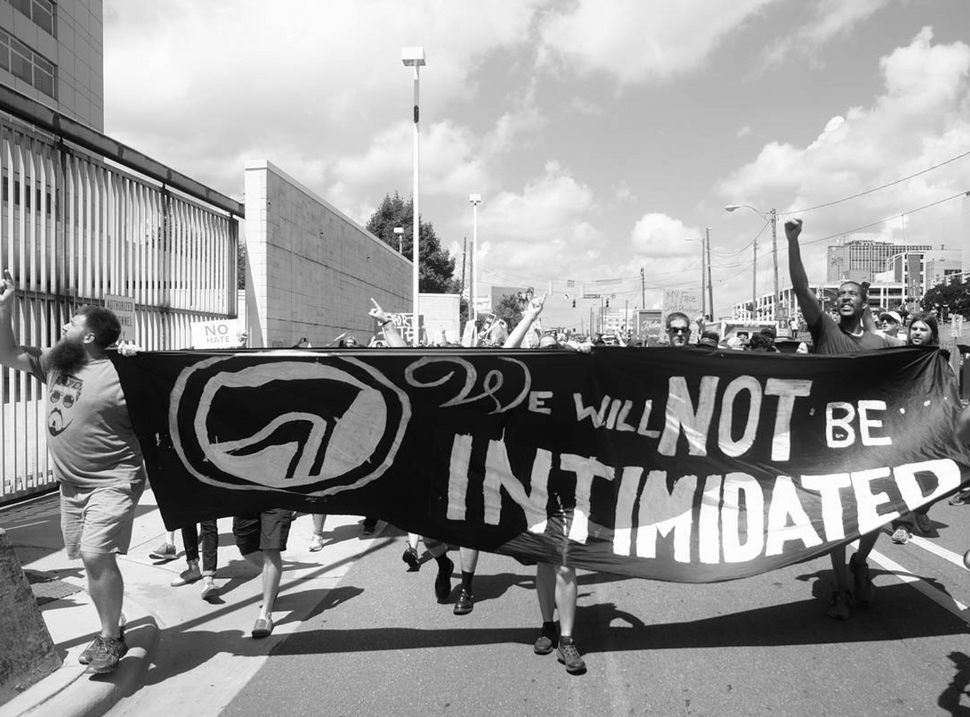 A protest was quickly planned in Durham, North Carolina on Friday after activists heard rumors of a possible Ku Klux Klan rally for later that day. The city of Durham’s Twitter account clarified there were no such event permits granted. Image by McCausland Havens

Hundreds of people swarmed the streets of Durham, North Carolina on Friday to protest a Ku Klux Klan rally rumored to be scheduled for later that afternoon.

A tweet posted from the city of Durham’s Twitter account said Durham police have not issued an event permit for any group on Friday, and encouraged people to stop spreading rumors.

One man did raise a Nazi salute before being “chased out” of the crowd, according to organizer Courtney Sebring.

The activity in Durham on Friday is just one of the pairs of rallies and counter-protests planned in the wake of the Unite the Right rally in Charlottesville, Virginia on August 12.

Sebring said a black woman raised a closed fist, a symbol of the black power movement, and a man raised a Nazi salute in response — and then some in the crowd of counter-protesters “chased out” the man.

“We are very concerned about the emboldened attitude of the KKK, of white supremacists, in this city,” Sebring said. “However, we know that people are here to stand up against it. We know that we will keep each other safe today. We’re stronger in numbers.”

Sebring said she and other organizers had about two hours to plan the counter-protest once they caught word that a KKK rally might’ve been planned for later that day. She estimated seeing about 800 people in the streets, and said “safe zones” were established in different parts of the city to relieve counter-protesters with water and air conditioning during the 93-degree day.

The Durham counter-protest follows a similar one in Charlottesville, when hundreds took to the streets to rail against white supremacists. On August 12, the Charlottesville rally quickly turned violent, with many participants donning white polo shirts and some waving swastikas. As the Jews of Charlottesville observed Shabbat in the city’s only synagogue, three men stood armed across the street.

A right-wing “free speech” assembly is planned for Saturday in Boston, and thousands are expected to protest in opposition, according to NBC.

Sebring, the Durham organizer, is a senior at North Carolina Central University and said she’s relied on the support of other activists since school has already resumed.

“It’s difficult to balance fighting against white supremacy and making it to class,” Sebring said, “but it feels incredibly important so I’m doing my best to balance my schedule.”