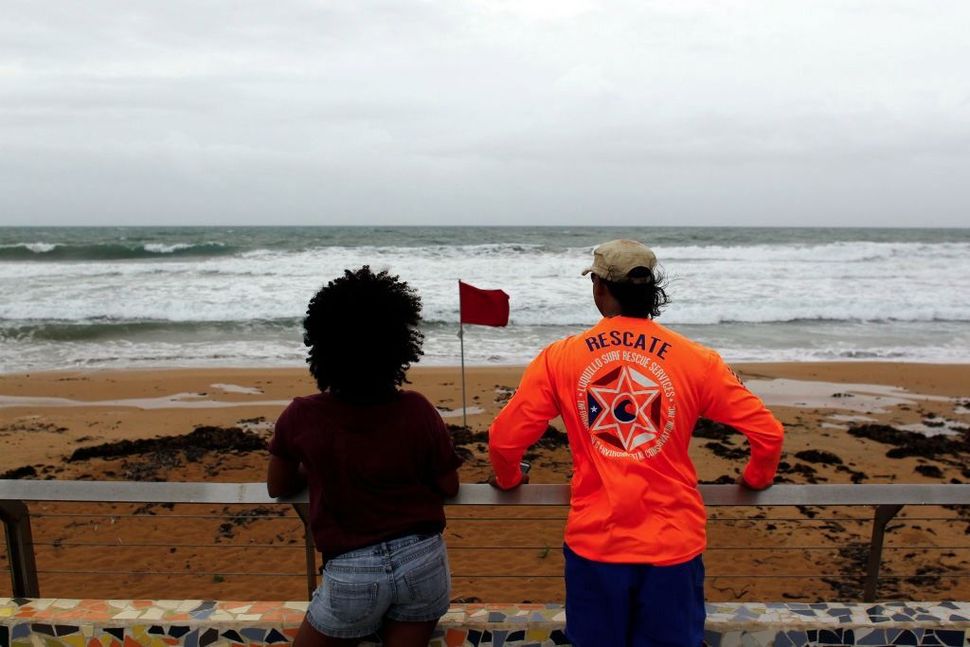 The small Jewish community in Puerto Rico is preparing as best it can for the expected arrival of Hurricane Irma, one of the most powerful storm systems on record.

“We’ve had just a few moments of some gusty winds, and some heavy rains for a short period of time. But this is going to increase in two or three hours,” the director of the Jewish Community Center of Puerto Rico, Diego Mendelbaum, told the Forward on Wednesday afternoon.

“Most Jewish people, if not all of the Jewish families, do not live in the most vulnerable areas, so the preparation is basically what everybody else is doing, getting ready with the basic stuff: Food, water, medical supplies,” he explained. “We do expect a long time without energy, without electricity. How long, I don’t know. It could be weeks or months.”

The island, an American territory, has faced severe economic struggles for the past few years. The local power company has warned that due to financial factors and the expected size and strength of the storm, parts of the island may be without electricity for four to six months.

“It’s important to know that Puerto Ricans as a people have gone through a very challenging stretch, from economic distress, to the Zika virus, which has decimated the tourism economy,” Rabbi Mendel Zarchi of Chabad of Puerto Rico told the Forward. “So this hopefully won’t be that extra kick that we din’t need at the present. But they’re a resilient people, and we will overcome the challenges.”

Puerto Rico has around 1,200 year-long Jewish residents—a number that has recently shrunk due to economic migration. Mendelbaum explained that “Because we are so little, and we know each other so well, we are organized after the hurricane passes and goes away to make sure everyone is okay,” though whether it will be possible to do so by phone or email after the storm remains unclear.

“They’re used to wars, but they’re not used to storms,” Zarchi said. “We calm them, assure them, tell them the steps they should take to be secure.”

Although the hurricane is not expected to make landfall on Puerto Rico, damage from winds and flooding could be extensive. The new Chabad building, which is only 1 1/2 years old, is in a flood area a block off the coast and was subject to a mandatory evacuation — the first one in Zarchi’s 19 years on the island. Nonetheless, Chabad is planning on resuming activities after the storm, using a backup generator to provide food and other services. “In times of challenge, people come together,” Zarchi said. “People open their homes to others.”

Mendelbaum expects that the hurricane will also affect the JCC building, which also houses the Shaare Zedeck synagogue. “We do expect most likely to have serious damage to the building,” he said, noting that parts of the roof are made of wood and that there are “lots of crystals in the building.” But if the building is spared, he added, it will serve as a refuge for members and neighbors.

The synagogue’s prayer books and five Torah scrolls should remain unharmed. They were placed inside of an ark, which in turn was placed in a safe room with no windows. “It’s practically impossible for there to be damage there,” he said. “If there is damage there, that means that nothing remains.”