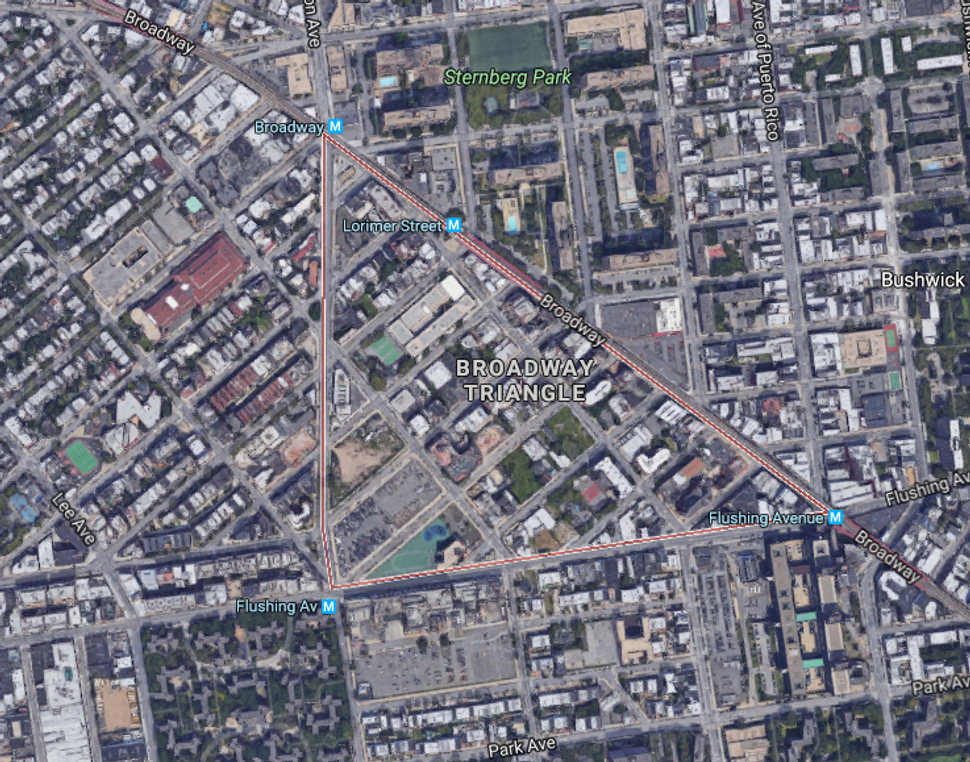 For nearly 30 years, three ethnic groups with growing housing needs — Hasidic Jews, Latinos and African-Americans — have been eying the same few vacant lots in Brooklyn as a location for a possible housing development. At a City Council hearing on Tuesday to discuss a massive residential project proposed on those grounds, tensions boiled over.

Implicit accusations of racism and anti-Semitism flew back and forth between councilmen, community leaders and lawyers for both sides. Proponents of the development — a 1,146-unit mixed-use project in the Broadway Triangle neighborhood — asked the council members to rezone the land on which the development is proposed. Opponents called the development illegal, discriminatory and evidence of collusion between a Jewish developer and a major Hasidic Jewish organization. At stake is a sense of ownership over the neighborhood — and 287 “affordable” housing units that are reserved for low-income residents.

Much of the tension over the development boils down to a clash between Latinos and Hasidic Jews. The property developer, the secretive Rabsky Group, is helmed by two Hasidic men, and the development has the strong support of the United Jewish Organizations of Williamsburg (UJO), a not-for-profit that provides services primarily to the Hasidic community. The project is vocally opposed by Churches United For Fair Housing and Los Sures, two not-for-profits that provide services primarily for the Latino community.

The project has also caused clashes on the City Council: It is supported by Councilman Stephen Levin, in whose district it is proposed, and is vociferously opposed by Councilman Antonio Reynoso, whose district neighbors Levin’s. The two have butted heads over the future of the Rabsky project for nearly a year.

Reynoso and other community leaders who oppose the development allege that because the development has many three- and four-bedroom units, it will overwhelmingly favor large Hasidic families — even in the random lottery that will determine who gets to live in the affordable units.

They also allege that even though 25% of the units will be deemed affordable — the minimum number mandated by the city — it will still have massive displacement effects for poor residents of color in the area.

Rabsky Group representatives presented new details about the project’s proposed unit mix at the City Council hearing, saying that the mix of affordable units would be a quarter each of one-, two-, three- and four-bedroom units.

Ramos recounted previous efforts to integrate Brooklyn housing projects, claiming that Levin, the councilman, was the “one common denominator” between the developments.

Jesus Gonzalez, the co-executive director of Churches United For Fair Housing, also appeared to accuse Levin of having a financial interest in the project.

“We can also ask, ‘How long has Stephen Levin known Rabbi [David] Niederman?” Gonzalez said, referring to the director of UJO, who has repeatedly vouched for the Rabsky Group in community board meetings in Levin’s district.

Shekar Krishnan of the Brooklyn Legal Services Corporation told the council that the project will “cater explicitly to the Hasidic Jewish community.”

“Because he’s Hasidic Jewish?” Levin interjected, turning to BLSC chief counsel Marty Needleman, who is also Jewish. “Marty, can you explain to me what that means?”

“The Rabsky connection to the Hasidic community is a money connection,” replied Needleman, in reference to UJO’s support for the development. “There are money relationships here.”

“I’m not really sure what that means,” Levin responded.

“I’d be shocked if it were not true,” Needleman said.

Needleman was roundly chastised by David Greenfield, another Jewish councilman who represents a heavily Jewish district, for suggesting a quid pro quo relationship between UJO and the Rabsky Group, calling it “an outrageous lie.”

“It’s a pretty serious accusation when you say that these are specifically Jewish money connections,” Greenfield said. “That’s an unfair claim to make in public.”

The council is expected to vote on the zoning changes within the next week.

Opponents of the latest Triangle development maintain that neither of the Rabsky Group’s principals have made an attempt to meet with residents. They point to reports accusing the developers of “unscrupulous” management and the firm’s decision to lower the amount of affordable housing promised at a separate development in Brooklyn after purchasing the site from another developer.

Though the Rabsky project has the support of Levin, Greenfield and the local Community Board, Brooklyn borough president Eric Adams has called on the City Council to reject the plan.