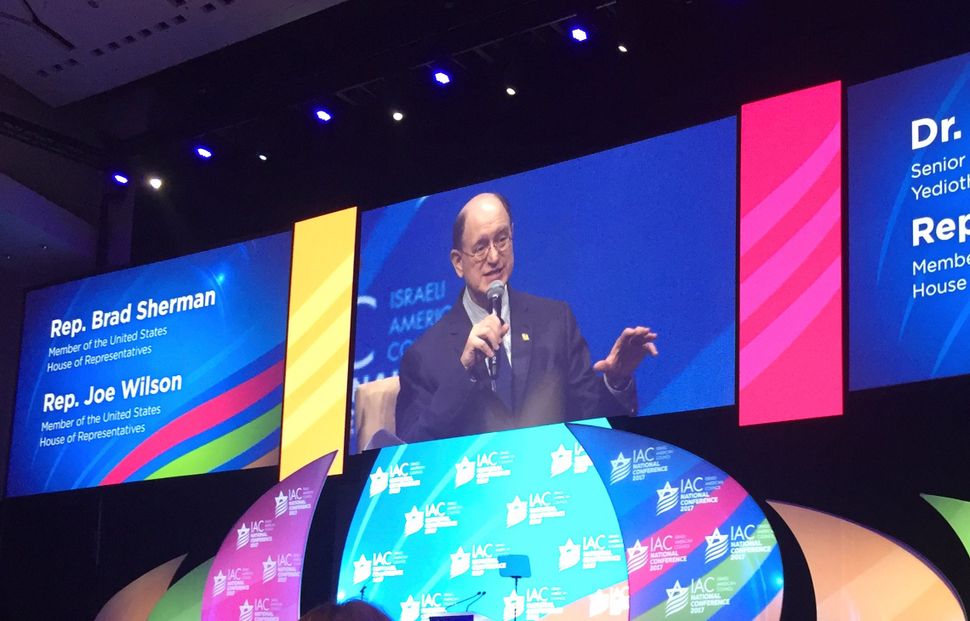 The Israeli-American council’s rank and file membership isn’t totally on board with its leadership’s hawkish stances. Image by Josh Nathan-Kazis

On stage at the national conference of the Israeli-American Council, Israel’s hawkish deputy minister of foreign affairs, Tzipi Hotovely, seemed surprised, and then annoyed, as the crowd turned against her.

Hotovely had likely expected to find a friendly audience among the Israeli-Americans. Their organization’s leading donor, Sheldon Adelson, is America’s best-known pro-Israel hawk. But within moments of coming on stage, she had lost the crowd.

“Merav [Michaeli] may be very popular here,” she said, lashing out at the left-wing Knesset member with whom she was debating, whose attacks on Benjamin Netanyahu’s government had won applause. “But in Israel, she’s going to be in the opposition for many years.”

A newcomer on the national scene, the IAC is one of the leading recipients of Adelson’s beneficence, to the tune of more than $10 million. But Adelson’s vision for the group seems like it may be in conflict with that of its Israeli-American rank-and-file. That tension was on stark display in the final days of the group’s fourth annual conference in Washington, D.C., which ended Monday.

“Many of the people who work here are Israelis in the middle of the road who probably would have voted for the left in Israel,” said one IAC staffer who identified as an “Israeli lefty,” and asked not to be named. “Yesterday morning’s plenary proved that no one can hijack the Israeli-American community. The crowd did seem to differ from the political line of the conference, and maybe the organization’s leadership.”

Perhaps Adelson, like Hotovely, was perturbed the crowd’s preference for the dovish Michaeli. Hours later, speaking after the gala dinner Sunday night, Adelson laid out his plans for the IAC in startlingly blunt terms: That it would become a harder-line alternative to AIPAC, which he stopped funding in 2008 amid a dispute over aid to the Palestinian Authority.

“We need a group of people to advocate for Israel unequivocally, and I felt if there was an organization called the Israeli-American Council, that council and that organization would unequivocally always without question and irreversibly support Israel when it needed it,” Adelson said of his thinking when he began funding the group. “There will be no political correctness.”

On Monday, the organization sought to blunt the impact of the remarks, which had been reported in the Forward and elsewhere. At a closing panel featuring Adelson and Barry Shrage, the longtime head of the Combined Jewish Philanthropies of Greater Boston, a fiery Shrage lashed out at a Haaretz column that morning that had accused Adelson of having “hijacked” the IAC.

“This is a man who needs to be understood, because he is not always well understood,” Shrage said of Adelson. “There was an article this morning that was basically an attack on the IAC, and it said something truly absurd: It said that the IAC and Sheldon only have one direction, and that’s to the right.”

In the corridors of the conference, Adelson’s slap at AIPAC passed almost without notice, but participants were eager to discuss the crowd’s reaction to Michaeli. Some said it was an indication that the IAC rank-and-file, unlike its donors and leadership, were politically center-left.

To be sure, the crowd mobbed the popular far-right Israeli minister of education Naftali Bennett as he walked the halls of the conference, though his late-night speech on Sunday washed over a tired audience. Monday morning sessions in which the Israeli ambassador Ron Dermer and both Republican and Democratic congressman advocated hard lines on Iran, by contrast, drew standing ovations.

And at times, the conference felt as if it were taking place inside a hawkish pro-Israel bubble. Most of the groups tabling in the corridors were on the right side of the political spectrum; many of them major recipients of funding from Adelson. The Zionist Organization of America, CAMERA, Students Supporting Israel, Alpha Epsilon Pi, and StandWithUs all had tables. Dovish groups like J Street were absent, and representation from mainstream groups like HIllel and the Jewish federation system was thin, despite appearances from Shrage and the head of the UJA-Federation of New York. Among the speakers, Michaeli was the only representative of a left-wing Israeli party.

Still, at the Sunday panel with Michaeli, Hotovely lost the crowd when she praised the Israeli economy.

“Unfortunately I am suspecting that too many people in this room, and certainly Israelis in America, have lived on their own flesh,” Michaeli shot back, referring to the attenuated social safety nets bemoaned by critics of both American and Israeli capitalism.

On her proposal to impose term limits on the office of Israeli prime minister, and on her criticism of the Western Wall status quo, the room also preferred Michaeli, a member of the Zionist Union party, over the Likudnik. Hotovely did not take it well.

“Do you even care about the [Western Wall]?” Hotovely snapped.

Speaking to the Forward that evening, Michaeli said that people in the corridors had thanked her for showing up at the conference. “I think from the responses that I was privileged to get today, it seems that the crowd is not as right-wing as some would have thought,” she said.