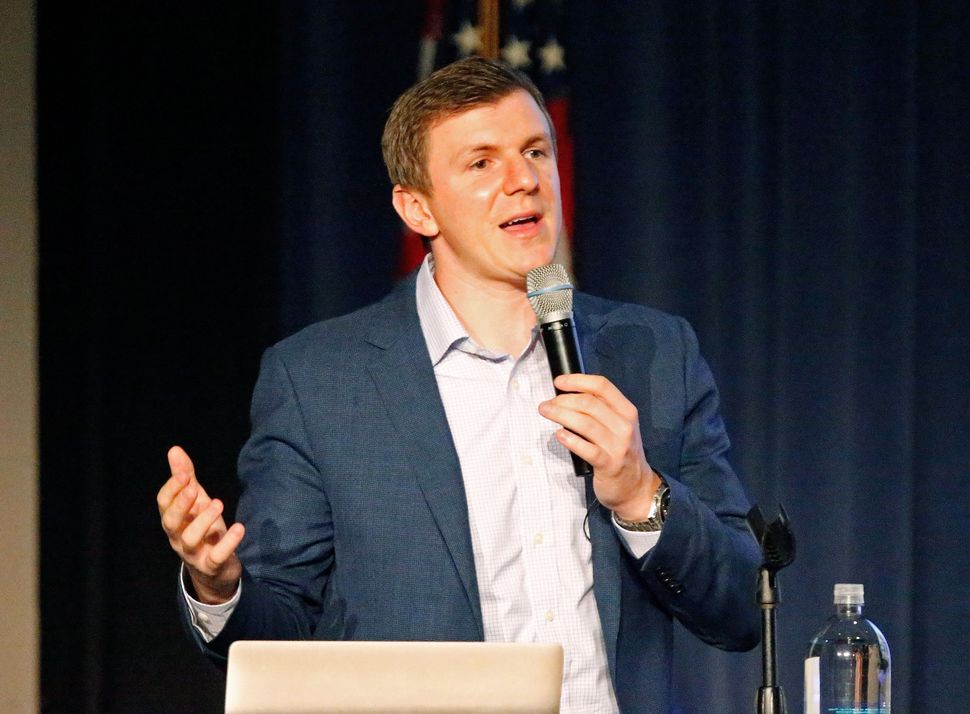 Conservative media activist James O’Keefe speaks at an event hosted by the Southern Methodist University chapter of Young Americans for Freedom. O’Keefe is head of Project Veritas, a right-wing media activist group that found itself in the news after a woman was seen entering the offices of the organization after trying to convince Washington Post reporters that she had been sexually assaulted by U.S. Senate candidate Roy Moore of Alabama when she was 15 years old. Image by Stewart F. House/Getty Images

WASHINGTON (JTA) — A number of the foundations that fund Project Veritas, a group that uses deception and selective editing to discredit the media and liberal groups, also fund Jewish causes.

BuzzFeed tracked the tax returns of 26 foundations that have given money to Project Veritas after its latest gambit backfired this week: A woman allegedly working for Project Veritas attempted to dupe the Washington Post team that has written about alleged sexual impropriety in the past by Roy Moore, the Republican candidate in next month’s special Senate election in Alabama. Instead, the team exposed her.

Of those foundations, six contributed to Jewish and pro-Israel causes, many of them on the right of the spectrum. One of the six, Mutual of America Foundation, operates a fund that allows employers to match donations to their chosen charities and thus included small donations to hundreds of charities across the political spectrum.

The other five, however, appear to be funds closely controlled by families.

The most generous of these, the Shillman Foundation of Rancho Santa Fe, California, has two trustees, Robert Shillman and Dianne Parrotte. Shillman, the founder and chairman of Cognex, a technology company, made headlines in 2015 when it was revealed he backed a contest in Texas for cartoons mocking the Muslim prophet Muhammad. Two Islamist gunmen attacked the contest and were shot dead by police. The contest was sponsored by the Horowitz Freedom Center, a right-wing activist group run by David Horowitz that also appears on many of the same foundation tax returns as Project Veritas.

The Daniel and Susan Gotlieb Family Foundation of Beverly Hills, California, controlled by the couple, in 2015 gave the Central Fund for Israel, a clearinghouse for right-wing Israeli groups, $5,000; the Horowitz Freedom Center $25,000; StandWithUs, a hawkish pro-Israel advocacy group, $1,600, and Project Veritas $2,500.

The Tart-Wald Foundation, controlled by Allan Wald of Lantana, Florida, and Kenneth Wald of New York, gave the Middle East Forum, a hawkish pro-Israel think tank based in Philadelphia, $3,000 in 2013-2014 and Project Veritas $2,000.

Also appearing on BuzzFeed’s list was the Donald Trump Foundation, which was controlled by the real estate mogul and reality star and his family until his election as president last year. Many of the Trump Foundation’s gifts to Jewish groups have been previously reported — $10,000 to the American Jewish Committee in 2015, $26,500 to the Anti-Defamation League in 2014, $40,000 to the UJA-Federation of New York from 2012 to 2014, and $100,000 to the Museum of Jewish Heritage in 2012.

What was previously unnoticed until the BuzzFeed report was that the foundation donated $20,000 to Project Veritas in 2015. The Washington Post has reported that Trump has not donated to his namesake foundation since 2009; instead he has funneled money from others into it.

A Greenwich, Connecticut-based fund run by Charles Royce, a prominent investment adviser, gives money to an array of causes, including many Episcopalian charities. However, on its 2013 and 2015 returns, the Royce Family Fund lists The Jewish Experience as receiving $10,000 each year. It’s not clear what that refers to, but the Jewish Community Center in Denver is called The Jewish Experience. The fund gave Project Veritas $2,500 in 2014.

Jaime Phillips, the alleged Project Veritas operative who also secretly recorded other Washington Post staffers at get-togethers in restaurants and bars, claimed to the two staffers covering the Moore allegations that she was impregnated by Moore when she was 15, and that he forced her to abort the child. She was instead exposed by the Post team as a fraud.

The tax returns compiled by BuzzFeed do not provide a complete picture of donors to Project Veritas, some of whom may use methods to conceal their contributions. Project Veritas raised $3.7 million in 2015.