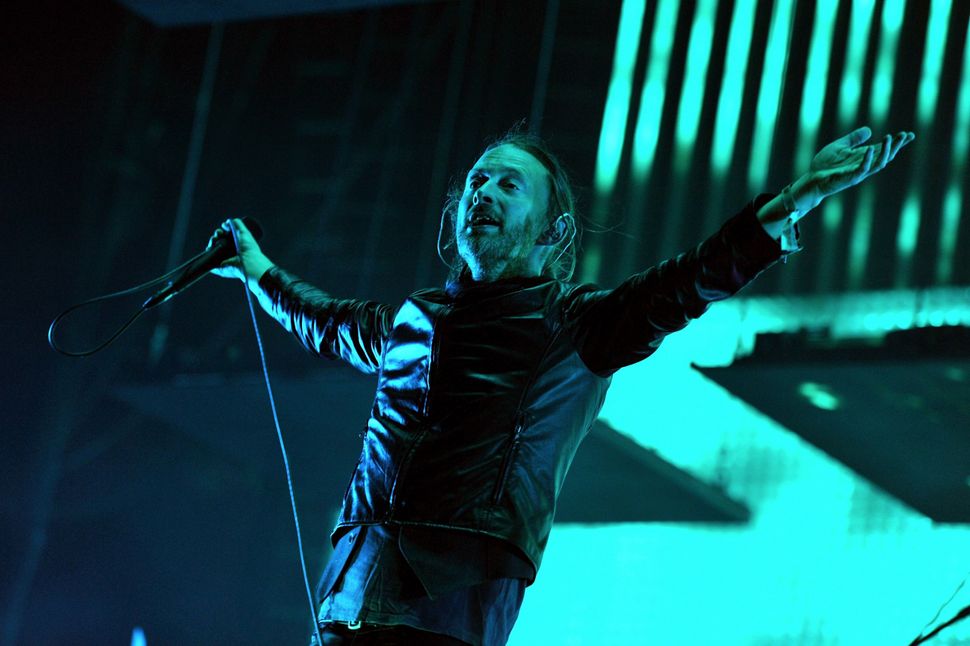 (JTA) — Pop star Lorde’s decision to cancel her scheduled concert in Israel has sparked some fierce reactions, even if most of them were expected.

The 21-year-old New Zealand native’s move earned praise from proponents of the Boycott, Divestment and Sanctions movement, who said she was taking a stand for the Palestinians. Meanwhile, a range of Israel supporters — from this group of entertainment industry executives to Australia’s version of the Anti-Defamation League — said Lorde’s cancellation sends the wrong message and does not promote coexistence.

Lorde is far from the first artist to take political considerations into account when deciding whether or not to perform in the Jewish state. A multitude of musicians from around the world have faced criticism and pressure over their decisions involving Israel in recent years. Here’s a look at how some prominent ones dealt with the issue in 2017.

Radiohead performed in Israel, despite calls not to do so

Radiohead was hit with a flurry of criticism from both fans and high-profile artists when they scheduled a concert in Israel. But the English rock band chose to disregard a letter signed by boycott movement leaders and ended up playing their longest show in over a decade at Tel Aviv’s Hayarkon Park in July. Thom Yorke, the group’s frontman, called those pushing a boycott “disrespectful.”

“You’re not bringing people together. You’re not encouraging dialogue or a sense of understanding,” he told Rolling Stone in June.

Roger Waters urged others to cancel shows in Israel

The former Pink Floyd frontman is a leading proponent of the BDS movement, so he surprised few when he exhorted Radiohead not to perform in the Jewish state. In a response to Yorke in June, Waters that the BDS movement “exists to shine a light on the predicament of the occupied people of Palestine, both in Palestine and those displaced abroad, and to promote equal civil rights for all the people living between the Jordan River and the Mediterranean Sea no matter what their nationality, race or religion.”

Nick Cave performed in Israel to take a stand against BDS

The somber Australian rocker performed with his band, The Bad Seeds, in Tel Aviv in November. He revealed at a press conference that he was motivated to perform there after being asked to sign onto an artists’ pledge to boycott Israel.

“[I]t suddenly became very important to me to make a stand against those people who are trying to shut down musicians, to bully musicians, to censor musicians and to silence musicians,” Cave said.

The 80s pop legend performed in Tel Aviv in November despite feeling the usual heat from BDS activists. At the concert, he wore a suit decorated with Stars of David and reportedly said: “When I go to Israel people say you shouldn’t go, you shouldn’t go. F–k off I go where I like!” He also dismissed comparisons between apartheid South Africa and the Jewish state, and tweeted “I play for fans[,] not politicians.”

The former Smiths frontman, never a stranger to controversy, didn’t play in the Jewish state this year (he last performed there in 2016), but he did show off some serious love for the Jewish state. He included a song titled “Israel,” in which he calls the country’s critics “jealous,” on his latest album, released in November. On the track he sings: “In other climes, they bitch and whine/Just because you’re not like them … [T]hey who reign abuse upon you/ They are jealous of you as well.” The 58-year-old rocker, who draped himself in an Israeli flag at a past show, also titled one of his new songs “The Girl From Tel Aviv Who Wouldn’t Kneel.” The title is likely a reference to Etty Hillesum, a Dutch-Jewish diarist killed in Auschwitz, who referred to herself as the “girl who could not kneel.”