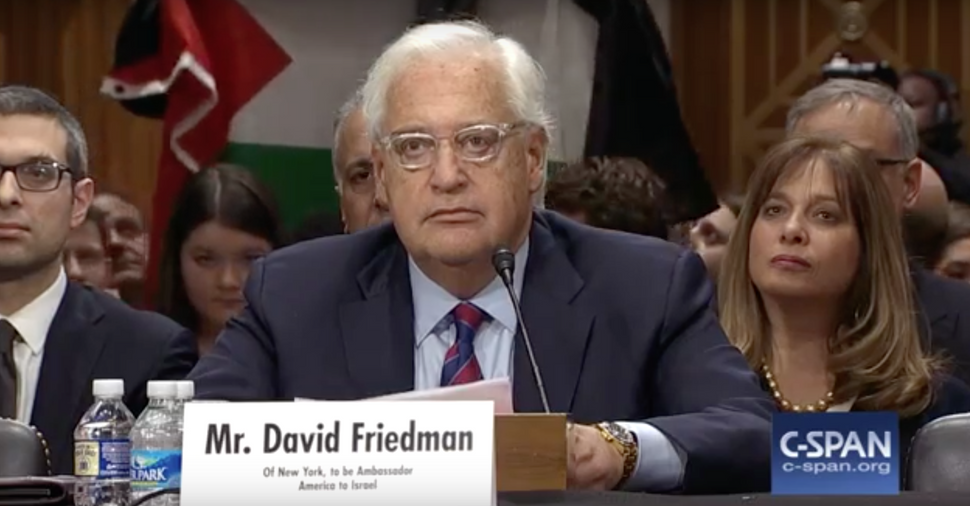 WASHINGTON (JTA) — The leader of Qomemiyut, a group that received funds from a charity headed by David Friedman, the U.S. ambassador to Israel, said his group is not the same as a group with an identical name on the U.S. State Department list of designated terrorist groups.

Mussa Cohen had told JTA on Friday, in a story reporting the donation, that his group was the same as the one established in the 1990s. That group was an offshoot of Kach, the extremist group founded by the late Rabbi Meir Kahane.

On Sunday, Cohen told Arutz Sheva, an Israeli news network, they had he had misunderstood the question, which JTA had posed to him twice, and said there was no connection between his group, founded in 2006, and the version that existed in the 1990s. Arutz Sheva also spoke to Baruch Marzel, who founded the 1990s version, and which he acknowledged was an offshoot of Kach, and he said there was no connection between the groups.

In an email to JTA, Cohen said the conversation was in “broken Hebrew” and that the result was “distortions and falsehoods.” The group “and I have no connection to Rabbi Kahane and I never met him,” he said. Kahane was assassinated in New York in 1990. “Connection Qomemiyut to Rabbi Kahane shows great ignorance about anything going on in Israel.”

Qomemiyut in its current iteration was established a year after Israel’s government evacuated settlements from the Gaza Strip in 2005, to prevent any further evacuations of settlements.

Qomemiyut translates as “sovereignty.” Its members are a who’s who of Israel’s hard right, including Knesset member Betzalel Smotrich, a member of the extreme faction of the Jewish Home Party, and Dov Lior, the former rabbi of Kiryat Arba who has repeatedly been accused of incitement. In 2014, Lior said Jewish law allows for the destruction of the Gaza Strip.

On its Facebook page, Qomemiyut describes its mission as the “strengthening and instilling of the values of the righteousness of the Jewish renewal and preventing the expulsion of the Jews from Judea, Samaria and the Golan Heights.” It has protested on behalf of Israeli Jews accused of incitement and has called on Jewish landlords not to rent to Arabs.

The State Department has since 1997 designated Kach as a terrorist group. The most recent State Department list, for 2016, includes “Qomemiyut Movement”, the group’s current name, as an alias for Kahane Chai, an offshoot of Kach. It was similarly listed in 2013, when Friedman’s group made the donation.

The Canadian government in 2016 listed Qomemiyut Movement as a terrorist entity. Mussa Cohen last year told Arutz Sheva that he would seek the movement’s removal from the Canadian list.