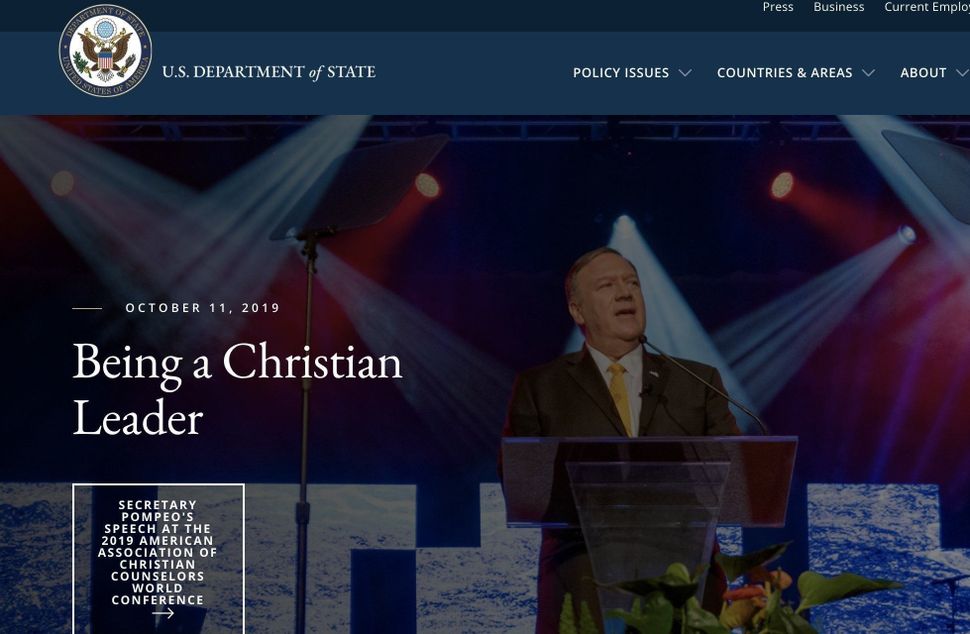 A screenshot of the State Department website, Monday, October 14, 2019. Image by state.gov

Secretary of State Mike Pompeo’s speech, “Being a Christian Leader,” delivered to the American Association of Christian Counselors, appeared to go over well in the room.

Video from the event, recorded October 11 in Nashville, showed the secretary stopping several times to field applause. Pompeo quoted scripture, said he keeps a bible at his desk and enumerated the features of a “Christian leader” that he deploys in his work at the State Department. But not everyone is happy with where his remarks landed.

On Monday, the speech was posted to the State Department’s homepage – it was later removed from that location, but remains on the website. Some believe that posting this speech may have violated the constitutional precept of the separation of church and state. Still others support the view that freedom of religion allows for exactly this kind of expression, and merely offers website visitors a window into how the secretary sees his role in government.

“I am grateful that my call as a Christian to protect human dignity overlaps with America’s centuries-old commitment to the same mission in our foreign policy all across the world,” Pompeo said in the speech.

Kevin Baine, co-chair of law firm Williams & Connoly’s First Amendment Practice Group, doesn’t see the post as unconstitutional, as it does not, to his mind, appear to be an endorsement of religion by the State Department itself.

“I do not see how anyone could think that the Department [of] State was endorsing any religious viewpoint,” Baine said in an email to the Forward, especially, he added, since the site features other speeches of Pompeo’s.

“This is obviously an expression of Pompeo’s personal beliefs, not the beliefs of the US Govt. The incidental expenditure of govt resources to support the website is so trivial that I cannot imagine it would create a problem under the Establishment Clause.”

Others disagree, seeing it as a clear violation of the Establishment Clause, a part of the First Amendment that forbids the government from establishing a state religion.

“In my view, to use the State Department to promote religion is unconstitutional,” Charles C. Haynes, founding director of the Religious Freedom Center of the Freedom Forum Institute in Washington, D.C., told the Forward. “To me this is not a gray area.”

It is not unconstitutional to be a person of faith who works in government, Haynes said. Indeed, Pompeo’s explicitly Christian speech, Haynes said – while not the type of rhetoric he likes to see in a leader of Pompeo’s status – is not itself the problem. The speech became an issue, he said, when a government platform, the State Department website, posted it.

Other groups, like Americans United for Separation of Church and State and the Council on American Islamic Relations, released statements on the speech that aligned with Haynes’ opinion.

Some people of faith cherish the opposite opinion: They believe that expressions of faith ought to be defended under the First Amendment.

Rabbi Pesach Lerner, president of the Coalition for Jewish Values, a group of politically conservative Orthodox rabbis, has a different take of the Establishment Clause.

“The Founding Fathers were not atheists, but represented a variety of religious views,” Lerner wrote in an email to the Forward. “They knew and expected that whomever was elected or appointed came with his or her beliefs. The claim that this runs contrary to the Establishment Clause is to misuse a key protection of our religious freedom to instead squelch and disenfranchise any religious viewpoint.”

Lerner asserted that because the conviction communicated by Pompeo was religious in nature, it was being singled out.

“He can’t force his opinions on others, but he should be free to voice his own,” Lerner said.

Pompeo’s beliefs have long been a part of his public persona. In March, he appeared on the Christian Broadcasting Network and said it was “possible” that Trump was installed as president to save Jews from Iran. He added, of Trump’s presidency, that he was “confident that the Lord is at work here.”

Haynes believes that hosting the speech on a government website is unprecedented for a secretary of state.

“I can’t think of another example where the State Department has put on its landing page a statement about the importance of religion in shaping foreign policy,” Haynes said.

“Secretaries of state traditionally have been very, very careful – not just about matters of religion, but in general, to make sure that the State Department represents the interests of the nation and does not in any way come across as promoting the personal views of the secretary of state.”

Baine said that using the website for this purpose is not a legal concern.

“It would be a stretch, I think, to say that the Department was endorsing Christianity rather than letting the public know where the current Secretary [sic] is coming from,” Baine said. “If you wanted to be cynical, you would say this is a political move to shore up support among that portion of the Christian community that supports the President.”

Haynes said the Religious Freedom Center would not at this time push for the removal of the speech, as it had been scrubbed from the homepage.

“Since it has been removed, we may discuss this at the next Committee on Religious Liberty meeting and consider whether to ask the State Dept. to do better,” Haynes wrote in an email.

The State Department has not responded to a request for comment.