Could Bibi’s Corruption Charges Actually Push Him From Power — After 10 Years? 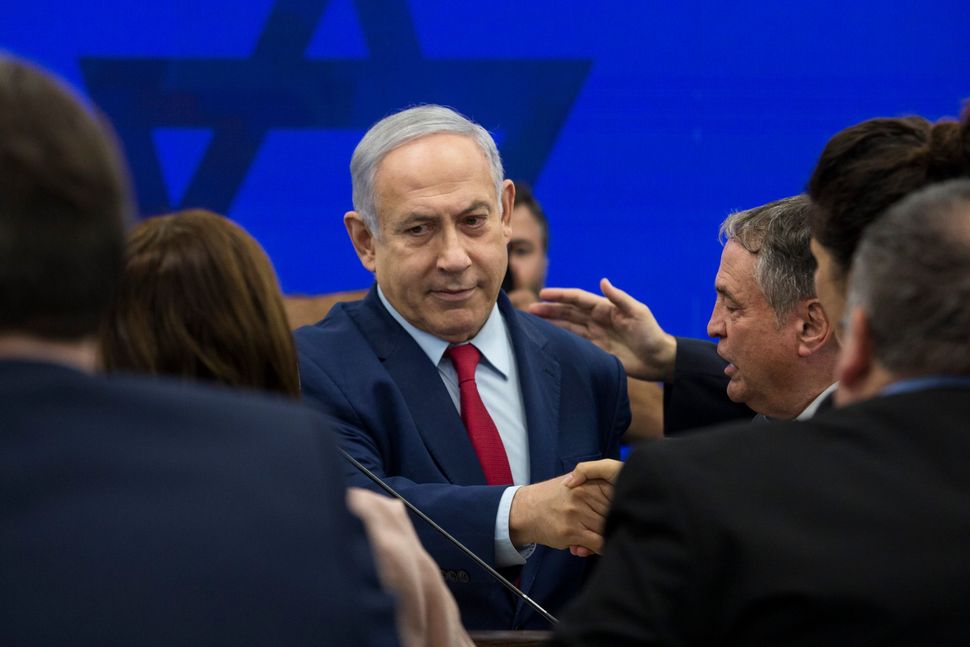 Israeli Prime Minister Benjamin Netanyahu was charged Thursday with bribery, fraud and breach of trust in connection with three corruption cases. Netanyahu, already the longest-serving prime minister in Israeli history, will be fighting those charges while at the same time gearing up for expected elections in March – the third round of voting in a year.

Here’s what we know about what the charges mean for his political future:

As in the United States, Netanyahu is considered innocent until proven guilty, and the prime minister has vigorously denied that he has done anything improper.

Case 2000 alleges that Netanyahu cut a deal with the owner of Israel’s largest newspaper, securing the promise of better coverage in exchange for a law that would harm rival publications. Netanyahu claims he was just trying to “test” the owner’s intentions.

And Case 4000 alleges Netanyahu made decisions benefiting Bezeq, the country’s biggest telecommunications conglomerate, in exchange for better coverage on Bezeq’s news website. Netanyahu said the policies he enacted were justifiable and never got better coverage anyway.

Legal proceedings on these cases are expected to drag out for months. In the interim, it’s unlikely that Netanyahu will have to resign his position.

Israeli law states that government ministers must step down if they’re charged with a crime. But the law is vaguer for prime minister. Most legal observers think he would only have to step down as the country’s most powerful man if convicted of the charges, but even that is an open question – one that the left-wing Labor Party is asking the country’s Supreme Court to rule on.

Israelis are probably going to have elections in the spring for the third time in a year. Nobody in the Knesset, including Netanyahu’s colleagues in the Likud party, are able to create a coalition with other parties that has enough votes to pass legislation.

In the past, that’s just meant that Netanyahu would keep leading the party, as he’s done since 2005, and head the government if they won. But things might be different now — and the corruption charges are an unstated but critical part of that. In past campaigns, opposition leader Benny Gantz has made hay of the expected criminal charges. He’s surely likely to emphasize the allegations as campaigning resumes again.

What’s more, Netanyahu may have to fight a two-front war, both against other parties and opponents within his own. Disappointed by the fact that two elections have come and gone without resolution, party ally-turned-rival Gideon Saar has said that he will take on Netanyahu in a party primary, challenging him for the leadership of Likud.

“If a new government won’t be formed and we go to a new election, it will not be reasonable that the prime minister will be successful in forming a government after a third election,” Saar said at the Jerusalem Post Diplomatic Conference. “So I think the necessary thing to do, if we are in front of a new election, is to set a Likud leadership primary. I think I will be able to form a government, and I think I will be able to unify the country and the nation.”

Saar, 52, has long been one of the most admired members of the Likud – in 2008 and again in 2012, Saar received the most votes in internal party races for who should be the #2 person on the Likud ticket. Saar served in the Knesset between 2003 and 2014, serving as education minister and internal affairs minister, where he acquired a reputation as a social moderate – extending benefits to same-sex Gentile spouses of Jewish immigrants, and proposing a bill mandating six-month jail terms for people convicted of firing pregnant employees. But he’s also opposed to a two-state solution, calling the idea of a Palestinian state a “mistake.”

Saar retired from politics in 2014, but un-retired three years later and re-entered the Knesset in 2017. Will his argument that it’s time for new leadership prove persuasive for exhausted party faithful? Or will Netanyahu be able to convince them that only he can keep Gantz at bay? One thing’s for sure – the wildest period in Israeli political history is only going to get wilder.

Could Bibi’s Corruption Charges Actually Push Him From Power — After 10 Years?