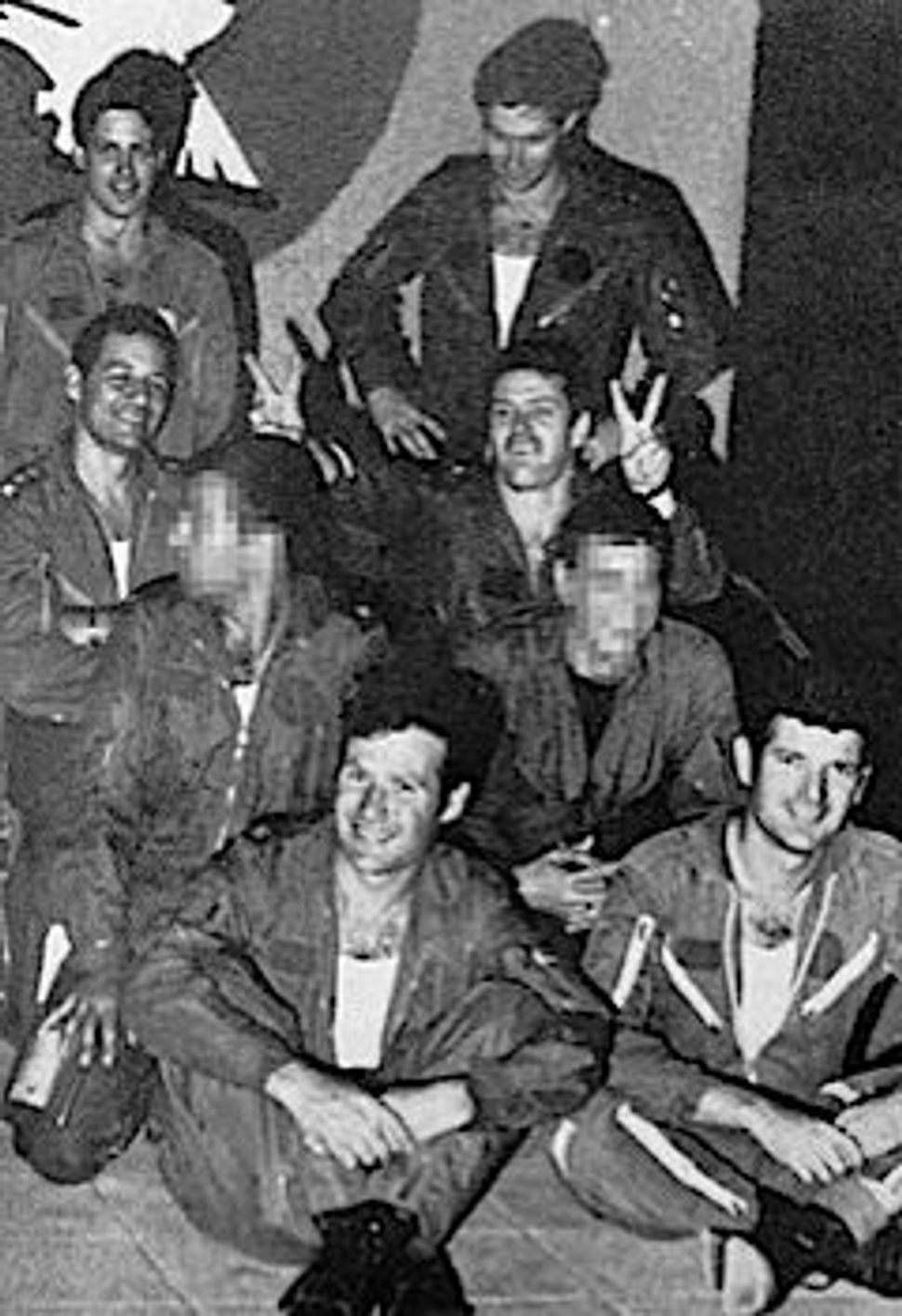 The Team: Members of the Israeli Air Force who took part in Operation Opera. The team included Israel?s first astronaut, Ilan Ramon, top left. Some of the faces have been obscured for security reasons. Image by Getty Images 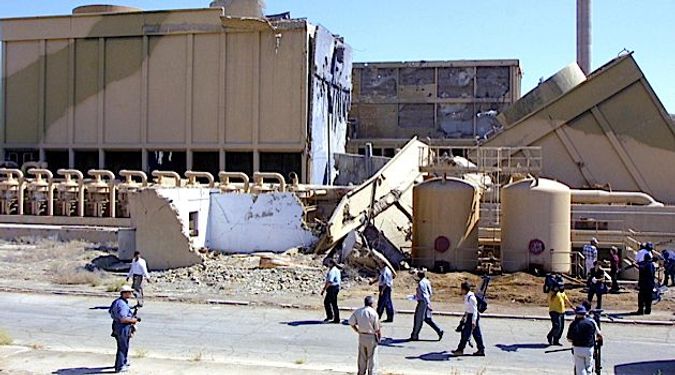 Bombed Out: In 2002, journalists tour the site of the nuclear reactor bombed by Israel during an air raid in 1981. Image by Getty Images

Thirty years ago, on June 7 at 5:31 in the evening, eight Israeli F-16s attacked Iraq’s Osirak nuclear reactor near Baghdad. Within 80 seconds they dropped 16 MK-84 iron bombs. When the last two were released by Ilan Ramon — who would become the first Israeli astronaut and one of the crewmembers killed in the 2003 Columbia space shuttle accident — the target was already destroyed. An hour later the pilots landed in the Etzion Airbase near Eilat. Operation “Opera,” the first successful raid against a nuclear reactor, came to its end.

Over the next 30 years, perspectives on the raid’s necessity and effectiveness have changed radically. In Israel the attack provoked a domestic debate between the Labor Party, which claimed that there was no need at this early stage to carry it out, and the Likud, which claimed that it was a necessity. The successful operation of June 7 contributed significantly to Menachem Begin’s electoral victory in the Knesset three weeks later. 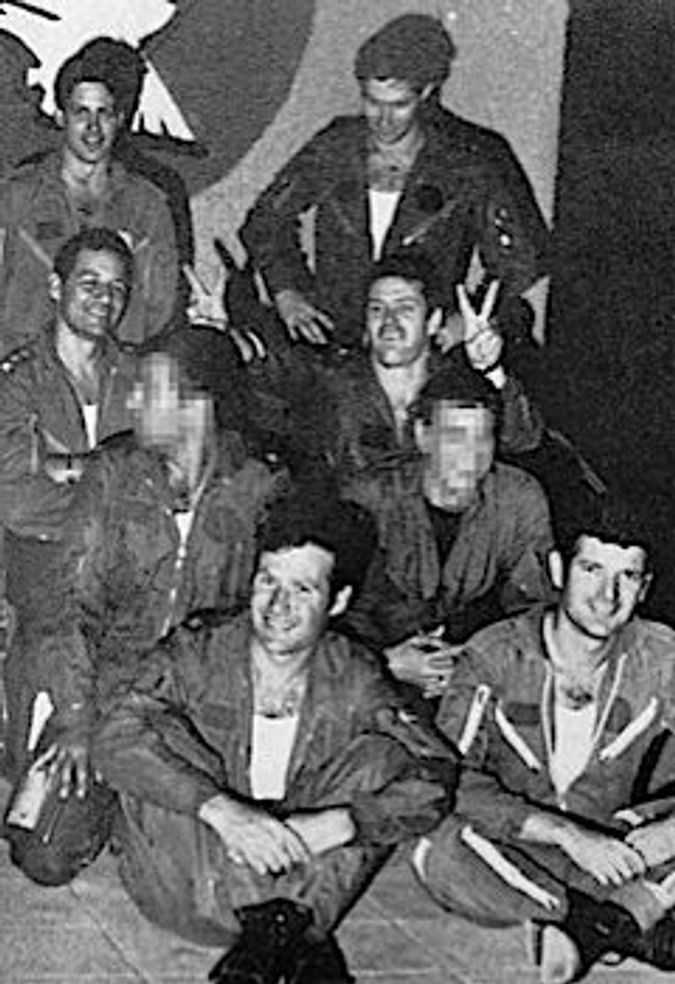 The Team: Members of the Israeli Air Force who took part in Operation Opera. The team included Israel?s first astronaut, Ilan Ramon, top left. Some of the faces have been obscured for security reasons. Image by Getty Images

The international community regarded the raid as a clear aggression and a breaking of the taboo on attacks against nuclear facilities. An editorial in The New York Times summarized this stand when defining it as “an act of inexcusable and short-sighted aggression” that tore “another of the international system’s fragile barriers against anarchy.” The White House delayed the shipment of additional F-16s to Israel and all others states, friends and foes alike condemned the attack. Behind closed doors, however, Saudi Arabia and some other neighbors of Iraq expressed satisfaction at the removal of a serious threat to their national security.

A decade later, Iraq’s invasion of Kuwait, the 1991 operation Desert Storm and the 39 Iraqi Scud missiles that landed in Israel changed world opinion. Legal experts now defined the raid as an act of self-defense, and a number of American officials who had previously opposed it admitted that in light of Saddam Hussein’s aggressive acts, the air strike that nullified his chances to go nuclear had become, in retrospect, justified. Later, the U.S. followed the Israelis by conducting preemptive strikes against terrorist targets such as the 1998 destruction of a suspected chemical weapons facility in Sudan.

The recognition that the Osirak raid was a justified act based on Article 51 of the Charter of the United Nations reached its height in the post-9/11 era. If in 1981, Israel conducted a surgical preemptive strike that caused no collateral damage, in 2003 the Bush administration used the same logic to justify a full-scale war against Iraq. As national security adviser, Condoleezza Rice explained in September 2002 that the administration did not “want the smoking gun [of Iraqi nuclear effort] to be a mushroom cloud.”

The Iraq War led to another shift in these perspectives. While the search for Saddam Hussein’s weapons of mass destruction yielded nothing, new evidence from his nuclear experts revealed that the strategic justification for the Israeli raid of 1981 was rather shaky. These Iraqi experts reported that prior to the Israeli attack they were already certain they wouldn’t be able to produce a significant amount of fissible material in the coming years because of tight international scrutiny. Moreover, they still lacked the separation plant needed to reprocess the plutonium in order to turn it into a nuclear explosive. In other words, Iraq was unlikely to get the bomb using the Osirak reactor.

Even more important, the 1981 Israeli raid, as we know today, pushed Saddam Hussein from the futile plutonium route to the more promising enriched-uranium option. During the 1980s Iraq had built, under a heavy veil of secrecy, plants to enrich uranium and on the eve of the 1991 Gulf War it was already very close to having enough fissable material to produce one bomb. As Richard K. Betts, a leading strategist from Columbia University concluded, “Israel’s preventive strike was not an example of effective delay.”

The historical debate about the effectiveness of the raid on Osirak has a bearing on present policies as well. In recent years the Iraqi nuclear nightmare has been replaced by an Iranian one. Consequently, Israel now faces a heated and mostly secret debate on how to deal with the Iranian threat. Prime Minister Benjamin Netanyahu, very much like his 1981 predecessor, promotes the military option. He is supported by Defense Minister Ehud Barak. Israel’s top military and intelligence experts, however, doubt the effectiveness of such a strike, since most of Iran’s enrichment process takes place underground in very well-protected facilities. Meir Dagan, the retired Mossad chief who headed the agency during the last eight years of Israel’s clandestine war against Iran’s nuclear project, estimated recently that a military strike would be “a stupid idea.”

This does not mean that Israel plans to do nothing to stop the Iranian project. According to various sources, the Stuxnet worm attack, a sophisticated form of cyber-warfare, has recently damaged and slowed down Iran’s uranium-enrichment program. All fingers point to the Mossad as the prime architect of this and perhaps other acts aimed at hindering Iran’s way to the bomb.

In 2011, it seems, sophisticated cyber worms might be far more effective than an MK-84 iron bomb.

Uri Bar-Joseph, a professor of international relations at Haifa University, is the author of “Two Minutes Over Baghdad” (Frank Cass, 2003).