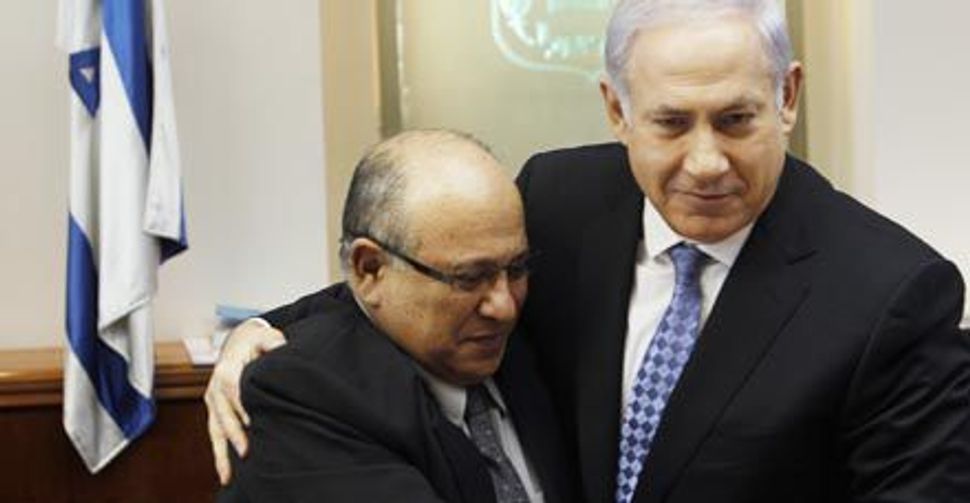 Official Jerusalem has been thrown into a world-class tizzy this spring by what some top figures are calling a serious security breach, committed by one of the highest-ranking Israeli officials ever accused of endangering the Jewish state. There have been cabinet-level calls for his indictment. The Knesset is considering draconian new legislation to outlaw the sort of leak he perpetrated. It looks like serious stuff.

The accused is Meir Dagan, who retired in January after nine years as director of Israel’s feared intelligence agency, the Mossad. His alleged crime: telling Israelis that their enemies aren’t necessarily as formidable as they might think.

His real crime: telling Israelis that their own leaders are far less dependable than they think.

In a series of semi-public talks with academics, journalists and a Knesset committee, Dagan has been arguing since January that Iran is further from gaining a nuclear weapon than Israel’s leaders claim and that the notion of attacking Iran’s nuclear installations, a cornerstone of Benjamin Netanyahu’s defense strategy, is “stupid.” He says that an attack wouldn’t succeed in eliminating Iran’s dispersed, heavily fortified nuclear sites. It would, however, spark a regional war which could threaten Israel’s existence. Moreover, he says, issuing military threats in order to deter Iran and stiffen Western resolve has the perverse effect of spurring Iran to speed up its efforts, in self-defense.

For good measure, Dagan argues that Israel’s near-paralysis on the diplomatic front is leading it toward disaster in September, when the Palestinians seek recognition from the United Nations. Addressing a June 1 academic conference at Tel Aviv University, he said Jerusalem urgently needs to seize the diplomatic initiative, instead of letting others dictate events.

For starters, he said, Israel should accept the so-called Saudi peace plan, which was adopted by the League of Arab States in 2002. The plan calls for Palestinian statehood along the pre-1967 armistice lines, plus an “agreed” solution to the Palestinian refugee problem based on an old U.N. resolution demanding the refugees’ return. In return, all 22 Arab states would normalize relations with Israel, exchange ambassadors and declare their conflict with Israel ended. Israel has repeatedly rejected the plan, arguing that its key conditions — the 1967 lines and return of refugees — are mortal threats. Dagan said they should be embraced as starting points for negotiations, not end points. That would return the ball to the Palestinians’ court.

Dagan’s views are entirely mainstream in the Israeli defense establishment. That’s not well-known, because of the defense chiefs’ traditional reluctance to speak out of school. The case for compromise is usually pinned on the left, which often lets itself be identified with Palestinian rights more than Israeli security arguments, weakening its popular appeal. That is the cycle that Dagan appears intent on breaking.

Most shockingly, Dagan said in June that Israel’s main decision-makers, Prime Minister Netanyahu and Defense Minister Ehud Barak, are “reckless and irresponsible” — perhaps reckless enough to attack Iran despite the mortal risks. And he hinted strongly that his views are shared by the entire senior echelon of Israel’s professional defense establishment that served alongside him — military chief of staff Gabi Ashkenazi and Shin Bet security service director Yuval Diskin.

Dagan said that the replacement of all three defense chiefs in a single sweep in the first half of 2011 had left nothing standing in the way of Netanyahu’s and Barak’s “dangerous adventurism.”

“When I was on the job, I, Diskin and Ashkenazi could restrain any dangerous adventurism,” he told a group of journalists on June 2. “Now I’m afraid there’s nobody to stop Bibi and Barak.”

Dagan’s broadsides have left most Israelis stammering, speechless. A handful of politicians, mostly from the Likud and parties to its right, attacked Dagan for undermining state security. A few others accused him of maneuvering to enter politics. One, Science and Technology Minister Daniel Hershkovitz of the tiny, pro-settler Bayit Yehudi party, said Dagan should stand trial, “even if what he said is right.” Likud lawmaker Miri Regev proposed legislation barring former security officials from speaking to the press for a year after leaving their jobs. Regev, at least, stayed in character; she’s a former army spokesperson and chief military censor.

The targets themselves have been relatively quiet. Netanyahu hadn’t responded publicly as of this writing, June 7. Barak complained that Dagan was weakening Israel’s deterrent power by disclosing that the military option is a bluff. He didn’t question Dagan’s facts, though.

Dagan’s main defense has come not from the left, which has largely been quiet, but from former heads of the Mossad and Shin Bet. Also defending him, unexpectedly, was the conservative Jerusalem Post, in a strongly worded editorial: “If Dagan’s critics think his analysis is wrong they should explain why. That, rather than trying to question his motives and pressing for his silence, is the way to respond to heartfelt concerns expressed by a man with many merits and priceless experience.”

For most, though, the flap seems to have aroused unfocused anxiety. Usually, anyone talking the way Dagan is talking would be dismissed as a fringe radical. Dagan, however, can’t be dismissed like that. A legendary ex-commando and former tank commander, he was tapped by Ariel Sharon to lead the Mossad at the height of the Second Intifada, when the agency was in disarray. His long tenure was marked by a string of dramatic successes, reputedly including assassinations of top Hamas operatives and operations against Iranian and Syrian nuclear facilities. He was due to step down last year after two terms, but Netanyahu asked him to stay on for continuity on the Iran front.

His apostasy is so unexpected that in the middle of the flap, on May 30, he was awarded the Moskowitz Prize for Zionism by far-right philanthropist Irving Moskowitz, a major backer of West Bank settlements.

In private conversations and Internet chats, Israelis and Diaspora Zionists alike wonder aloud what happened to Dagan. He of all people should realize the obvious truths: that the Saudi plan is a trap, that Iran must be stopped at all costs, that the Palestinians don’t want peace with Israel. Israelis have been hearing this from their elected leaders for years. To think otherwise is to scorn Israel’s basic security.

But now the living embodiment of Israeli security is saying all the wrong things. Something must be very wrong with him.

Well, something is wrong, but it’s not with Dagan. He’s the guy those leaders get their information from. They just haven’t been listening.

J.J. Goldberg can be reached at goldberg@forward.com