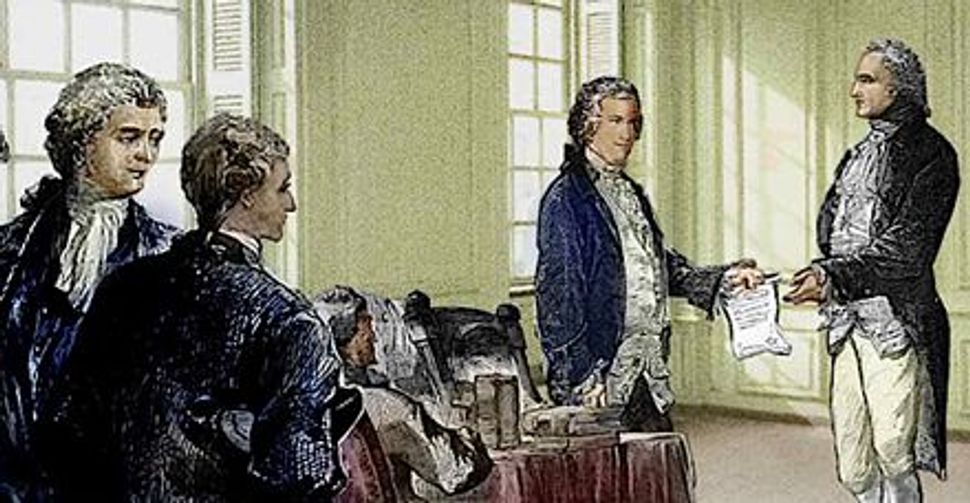 When Ron Chernow was travelling the country last year to talk about his new biography of George Washington, he was often asked about Washington’s 1790 letter to the Jews of Newport, R.I. — the one that famously promised that the United States government would give “to bigotry no sanction, to persecution no assistance.”

“There were very few speeches that I made where people didn’t ask about that letter,” Chernow recalled. “I can vouch for the fact that there’s tremendous curiosity out there.”

He’s curious, too. Even though Chernow spent six years reading through Washington’s papers to research his book, and was awarded the 2011 Pulitzer Prize for his effort, he’s never seen the original letter. In the last decade, hardly anyone has.

That cannot go on. As the Forward has documented in recent weeks, the letter that embedded religious freedom as a core American value has been hidden away in a nondescript arts storage facility in suburban Maryland ever since the museum in which it was housed closed its doors in 2002. The museum was run by B’nai B’rith International, which was lent the letter by its owner, the Morris Morgenstern Foundation, a private foundation based in Ventura, Calif. And neither B’nai B’rith nor the foundation has offered a convincing reason for why this iconic document has not been allowed to be publicly displayed.

So it’s time to persuade them otherwise. Joseph J. Ellis is another Pulitzer Prize-winning historian who has written an acclaimed book about the first president, and he, too, has never seen the letter. “It would be an honor to have it displayed,” Ellis said. “I’d like to see it myself.”

Historians know as well as anyone the deep significance of Washington’s words, the way they branded the new nation with the pledge of pluralism, addressed to “the children of the stock of Abraham” but in reality applicable to all. “It’s the most eloquent statement perhaps in our history of religious tolerance,” Chernow said. “There is a mystique about this letter that is almost unique among Washington’s papers. And there is a warmth to the letter that makes it especially compelling.”

The letter has, in the words of Jack Rakove, another Pulitzer Prize-winning historian, “a talismanic quality.” With the possible exception of President Truman’s declaration in support of the new State of Israel, Rakove said, “it is the most important document in American Jewish history.”

It’s not long — only 337 words — and like all such historical documents, its contents are in the public domain, easily read in print or online, and copies of it are hung in select museums and libraries. But that leaves history to speak in only a whisper. A fascimile fulfills a certain purpose, but it can feel cheap, manufactured. It doesn’t stir the soul, nor conquer doubt, nor make a civic connection. Authentic documents, Chernow reminded, “take us out of the realm of myth and put us into the world of historical events, real people and situations.”

Richard Beeman, a University of Pennsylvania historian, is also a trustee of the National Constitution Center, and is intimately familiar with visitors’ interactions with historical artifacts. “One thing we have learned is that many members of the public experience an important intellectual and emotional response when they see the original document. It brings this moment in the past alive,” he said.

That’s why, Beeman continued, “it is astonishing that there should be any inhibition whatsoever in displaying such an important document. I can see no justification for it.”

But this is not only about how best to display the past; it is also about how honestly and accurately to deal with the present. Understanding the motivations and beliefs of the founding generation is more than an academic exercise, for it gives us a broader persepctive on the America we strive to perfect today.

Washington’s warm and sturdy embrace of religious diversity was in keeping with his egalitarian vision for the new nation that he was asked to lead. It wasn’t a perfect egalitarianism — it’s not likely that he knew many Jews, and he certainly owned black slaves — but scholars say that he was the kind of leader who genuinely was openminded about others. Chernow reported that he did not find any racist comments in all of Washington’s papers, and noted that he was the one founder who arranged, at his death, to free the 125 slaves under his legal control.

As the first president of a nation far more homogenously Christian than it is today, Washington must have known the outsized impact of his statement to Newport’s Jews. He was not speaking only for himself. “Among the founders, there was a pretty clear and deep commitment to the principle of religious freedom and toleration,” Ellis said. “The public [today] needs to know, more than it does, that we are established on a set of principles that doesn’t privilege any one particular faith.”

This is why the Morgenstern Foundation must loosen the reins on Washington’s letter and allow it to be appropriately, carefully displayed in Newport, its historical home, or in the new National Museum of American Jewish History in Philadelphia, or in the Library of Congress in Washington — all of which asked, and were denied — or anywhere it sees fit.

In fact, B’nai B’rith had approached the foundation on behalf of the Philadelphia museum to display the letter, but the request was turned down. When asked why B’nai B’rith made the request, spokeswoman Sharon Bender replied: “Because we think NMAJH would be a wonderful venue for this important letter.”

The Forward believes so strongly in this cause that we will continue to press for answers and ask readers to send us their comments and support. As Rakove noted, this is probably the most important document in American Jewish history, “and to have it squirreled away seems like an embarrassment.”