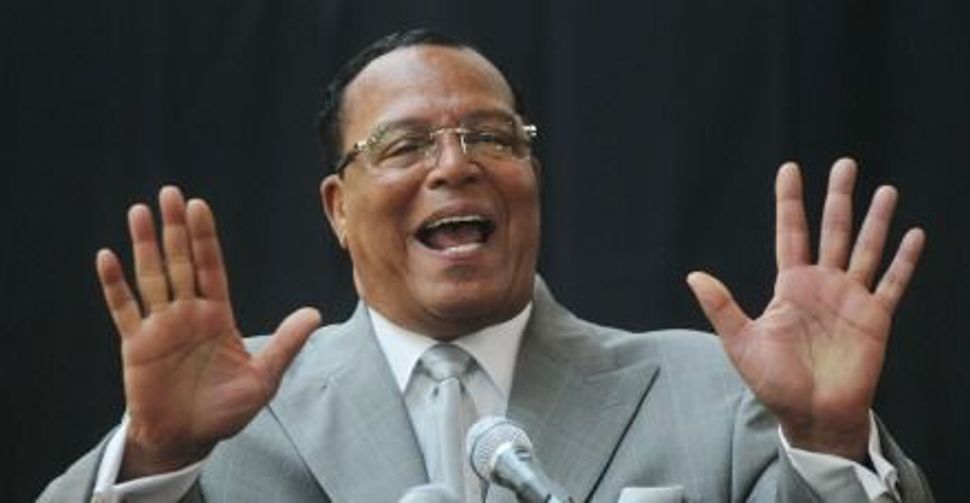 Early in the 1990s — so many years ago that it’s nowhere to be found online — I was on a panel about black anti-Semitism at New York’s 92nd Street Y, where the historian of slavery Eugene Genovese observed that if a black demagogue called Italian Americans “racists,” they’d come after him with baseball bats, but if he called Jews “racists,” they’d hold a few conferences at the 92nd Street Y.

Genovese was hinting that while the bat wielders weren’t right, neither were liberal Jews, who compulsively professed sympathy for blacks gripped by politics of racial paroxysm. A lot was wrong with liberal professions of “understanding” of the rhetoric of City College of New York Afrocentrist Leonard Jeffries or Nation of Islam leader Louis Farrakhan, to say nothing of the anti-white rhetoric surrounding the hate crime at Howard Beach, the trials of Tawana Brawley and O.J. Simpson, and other cases of the time.

But something was wrong, too, with the compulsive alarm about black anti-Semitism that consumed some Jews, and when it came my turn to speak, I explained, as I would later in writing why black demagogues in New York couldn’t be compared to Berlin ranters in the late 1920s. For some blacks, Jews were just “white folks whose skin they could get under,” not because Jews were so vulnerable, but because they were more likely to react as humanely as Genovese suggested.

At the panel, I told of how, amid a long, ugly black boycott of some Korean stores in Brooklyn at the time, I’d asked an ageing Jewish community-relations man for his assessment.

“Well, the merchants aren’t Jewish, so the protesters aren’t taking potshots at us there. And the mayor’s not Jewish, like Ed Koch. We can be like the Quakers now; we can mediate!” he said, opening his palms with a hamish peacemaking gesture.

Saul Bellow, sitting there in the audience at the Y, threw back his head and laughed silently, appreciatively. Cynthia Ozick looked less amused at my suggestion that Jews weren’t on a slippery slope to Auschwitz just because Jeffries and Farrakhan, whom most whites despise, broke a taboo against anti-Semitic rhetoric.

It’s clearer now that blood-curdling anti-Semitism is less likely to come from blacks than, as it always has — if at all — from the white right-wing populism, with which some neoconservative Jews allied themselves until recently. Blacks aren’t the problem, for several reasons.

First, blacks’ own orientations within American society have changed since the 1990s.

Although racism and poverty are still powerful, so is the maturation and — dare one say — the integration of a black middle class that while imperiled now (as are many whites) by economic crisis, has few memories of conflicts with those Jewish merchants, landlords, caseworkers and teachers who once dominated black neighborhoods. Jeffries and Farrakhan took their listeners back into a psychic landscape flickering with old, familiar Jewish demons. It’s fading now, as my Jewish community-relations man and Bellow understood.

Second, for all the bigotry against President Obama, his election, with more white votes than black ones, has reoriented many blacks’ feelings of American belonging. His Jewish support — at 78%, the highest of any white group — makes Jews something more than just “white folks whose skin you can get under.”

Third, immigrants to the United States from majority-black societies abroad are less — or some of them very differently — obsessed with the psychic as well as physical cruelties of slavery and segregation. That Obama himself is not a descendant of American slaves reinforces this shift in blacks’ own understandings of their blackness.

Fourth, Jewish orientations have changed, too. The 9/11 attacks shifted many whites’ (and Jews’) fears away from black dysfunction and toward Muslim subversion. You needn’t share the anti-Muslim sentiment — I consider most of it folly — to be glad that blacks are more accepted by whites, as allies against domestic and foreign terrorism.

Finally, the neoconservatives, who led the Jewish obsession with black anti-Semitism after the late 1960s and then the shift to obsessing about Muslim anti-Semitism after 9/11, have been significantly discredited for overplaying both hands — in a war-mongering foreign policy, as in inflating the implications of black anger.

For example, Yale University, where I teach, recently and quite rightly disbanded its neocon-heavy Institute for the Interdisciplinary Study of Antisemitism, which more accurately could have been called the “Institute for Jewish Nationalism and War With Iran.”

Demagoguery is never justifiable. In the 1990s I was a leader in chronicling and condemning much of what passed for black “civil rights” activism as destructive of public trust. But as early as that conference at the 92nd Street Y, I understood that Jews, too, can get carried away by fears that have deep historical resonance but are all-too-easily misdirected.

Jim Sleeper, a lecturer in political science at Yale and a former Daily News columnist, is the author of The Closest of Strangers: Liberalism and the Politics of Race in New York (Norton, 1990), and Liberal Racism (Viking, 1997)

Jim Sleeper, a lecturer in political science at Yale, is the author of The Closest of Strangers (Norton, 1990) and Liberal Racism (Viking, 1997). In 1971 he co-edited the anthology The New Jews with the late Alan Mintz. Sleeper’s 2009 essay, “American Brethren: Puritans and Hebrews,” in the World Affairs Journal, anticipated the current crisis in American civic culture and quoted the Israeli philosopher Yirmiyahu Yovel, who died two weeks ago.