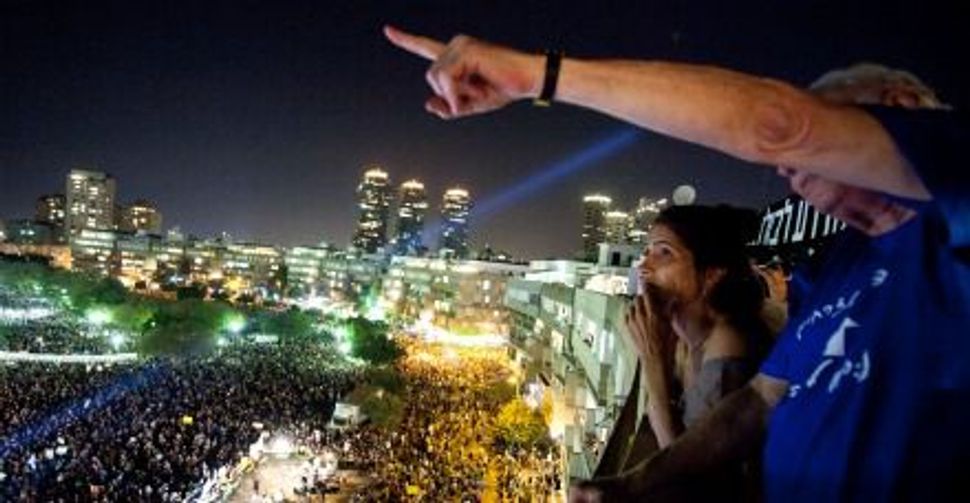 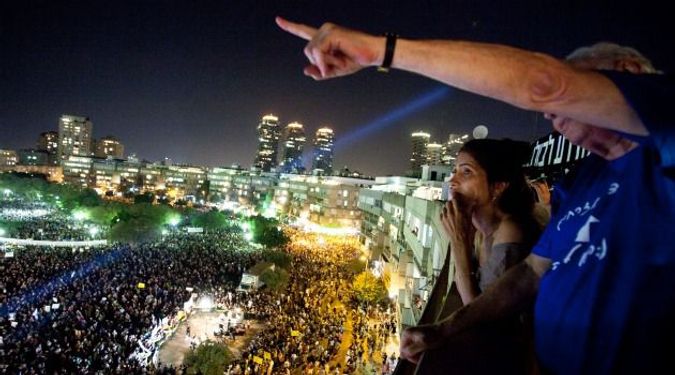 If you’ve ever been to Tel Aviv’s Kikar Hamedina, the circular public plaza in the north of the city, you’ll know just how utterly large it is. It’s a massive, usually empty expanse ringed by posh stores like Louis Vuitton and Gucci — the epicenter of Israeli capitalism, if you will. And so it was with some shock that I saw the images of the space packed to the gills with warm, agitated bodies, with protesters present for the concluding demonstration in Israel’s summer of social justice. Six percent of the country’s population, 450,000 people, showed up to chant and to demand change. If that proportion of the United States took to the streets all at once, we would be talking about 18 million people.

What was on display was passion and engagement by a portion of the population always considered a silent majority — the secular, city-dwelling, middle-class Israelis. It is this group that the polls refer to year after year when they cite that 70% of the population is prepared for a peace agreement. We know they exist, but who could even begin to hear them when you’ve got the angry, loud constituencies of the right, ready to lie down in the streets for their beliefs? The only time I ever remember this population acting like a collective during my lifetime was after the assassination of Yitzhak Rabin and that was to mourn together. But the issue that finally got them out was not the “situation.” It was self-consciously not, as the organizers of the protest put it, about “politics.” The issue was the high cost of housing and the neo-liberal economic policies that have caused wealth to pool at the very top. 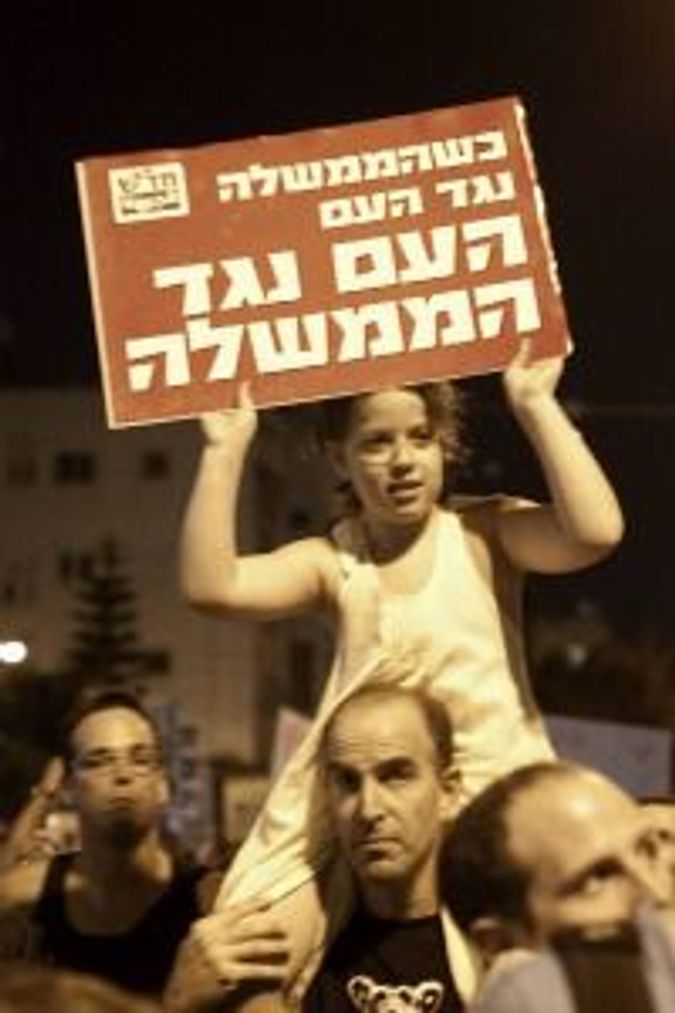 Learning Early: Many middle-class Israelis brought their children to the demonstration. Image by Getty Images

The Israeli left, in fact, has been watching what occurred this summer with their mouths agape. For years, activists and politicians from parties like Meretz and what is left of Labor have dreamed of building such a constituency. And those on the further left, who can’t believe that any issue besides the occupation should matter, have pooh-poohed the demonstrations as simply an exercise in self-absorption and, as one article in the lefty Web magazine +972 superciliously put it, a “fictitious revolution.”

I am among those who want to see the Israeli government back up its supposed willingness to negotiate with the Palestinians with more good faith and urgency. And so I, too, felt a pang of regret watching these protests and wondering what could have been if this pressure had been brought to bear on the issue of settlement expansion, for example. But I am also realistic. And there has to be a reason that Israelis mobilized around this issue. Early this summer, when the Knesset passed what many observers thought was an anti-democratic legislation making any speech in support of a boycott liable for prosecution, the silent majority did not care. A spontaneous protest in Rabin Square drew 50 people.

What made the housing protests different might be quite simple and maybe even obvious, but it’s something the left would do well to internalize if it ever hopes to attract such numbers and such thrilling support. The demonstrations this summer were driven by self-interest. These “average” Israelis who don’t usually lobby for special religious dispensation or approval of more housing blocks in East Jerusalem were unabashedly demanding something, a redistribution of wealth toward themselves. Bottom line, they wanted more of a say in how money is allocated and what their society does for them.

This is how Daphne Leef, a 25-year-old woman who set up the first tent, put it at the massive protest: “We are not here just to survive; we are here in order to live. We are not here just because we have nowhere else; we are here because we want to be here. We choose to be here. We choose to be in a good place, in a just society. We want to live in society as a society —not as a collection of lonely individuals who each sit in front of one box, the TV, and once every four years put a slip in another box: the polling box.”

It’s a reminder to the left and to all of us striving for some kind of change — of how human nature actually works. It would be a wonderful thing if Israelis were motivated by the suffering of Palestinians or the continued human cost of conflict and occupation. But for the most part, they are not. They have their own worries (pricy housing, apparently, among them). The lesson here is this: The cause of ending the 100-year war with the Palestinians has to be framed in different terms if it is to earn a constituency. It has to be presented as being in the self-interest of this silent majority.

It’s not that this hasn’t been tried before or isn’t occasionally deployed by politicians. Tzipi Livni speaks about Israel resolving the conflict for its own good as opposed to the Palestinians’, though I suspect that she does so more out of a desire to distance herself from what she sees as the squishiness of the traditional left rather than in an attempt to coopt it. But we hardly ever hear a politician argue this line with passion and conviction. We hardly ever hear that Israel needs to separate from the Palestinians in order to preserve its democratic character. And I don’t ever recall anyone making the additional argument that would speak directly to the crowds in Kikar Hamedina: Israel needs to focus on itself, on its own development as a society, on investing in its future, but it can’t do this as long as its shekels and its energy (not to mention the lives of its young men) are wasted defending an enterprise that is necessarily doomed. Or how about stating that it is a problem of housing. Listen to this statistic: Between 1994 and 2009, the government built 48.4% of all housing in the settlements while, during the same period, it constructed only 20% of the housing within Israel proper. There’s an argument for caring about the occupation that should speak to those worried about being able to pay the rent.

There was great power displayed the other night in Tel Aviv. The left can harness it. But first, lessons must be learned. And the most immediate is this cold truth: Mobilizing the masses means first giving them a personal stake in success.