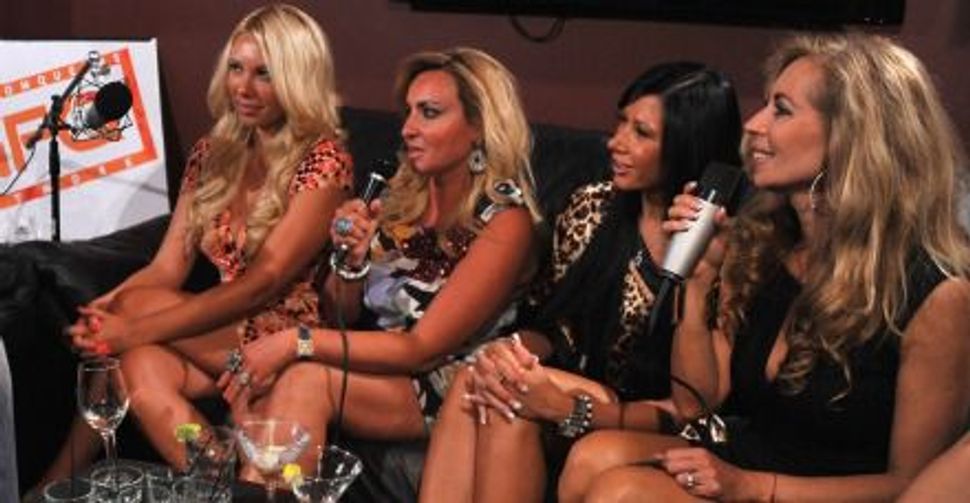 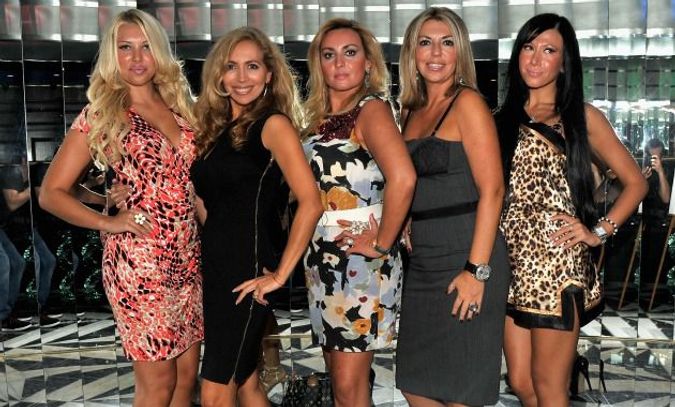 Like ?Jersey,? Only Worse: The cast of ?Russian Dolls? struts their stuff during a talk show appearance. Image by Getty Images

Watching television is not high on my list of things to do these days. As a second-year law student, there really isn’t much leisure time. But I couldn’t resist tuning in recently to watch “Russian Dolls,” a Lifetime network show that has been billed as the “Russian Jersey Shore,” in which the cameras of reality television turn their lenses on the foibles of the Russian-Jewish community of Brooklyn’s Brighton Beach. What can I say? Curiosity got the better of me.

I had expected some frivolous silliness. I was left, instead, with utter repugnance after watching a few episodes.

This show presents itself as offering a picture of the culture and lifestyle of Russian immigrants in America, but it is really focused on Russian Jews. Though never stated explicitly, it is clear from the outset that all the characters in the show are Jewish.

And what emerges from this portrait of Russian Jews? Money, greed, dishonesty, cars, jewelry, looks, shallowness, vulgarity, indecency, disrespect, sleaziness. Those are the themes on which the show is centered. It’s about a bunch of attention seekers, both young and old, who have nothing better to do with themselves than cause drama and brag about their wealth. In an early episode, Marina, one of the main characters, demands that her husband give her money to buy jewelry. When he asks if $20,000 will be enough, she responds with, “What can I buy for 20K?” In another episode, one of the younger “dolls,” Diana, who wears a giant diamond Star of David and seems to spend her days in a tanning booth, permanently tattoos lip liner around her mouth. Her father’s reaction is, “In five years, you’ll look like babushka!” The entire show is full of such characters, speaking disdainfully to everyone, showing huge attitude and talking behind each other’s backs.

I understand that this is no different from any other reality show — the “Desperate Housewives” of Brooklyn, if you will — but because it is the first exposure that most Americans will have to this immigrant community, it is also an embarrassment and an offense to Russian Jews.

The show has indeed spurred a great deal of anti-Semitism from non-Jewish Russians who are ashamed of how these few outlandish characters are representing all Russian immigrants. Certainly, stereotypes exist for a reason, and undoubtedly there are people in the community who embody the shallow personas presented in the show, but “Russian Dolls” does not represent who we are. And I should know.

My family immigrated to America from Ukraine when I was 12 years old. In the former Soviet Union, the life of a Jew was exceptionally difficult. It was much harder for a Jew to be accepted into any field of higher education, to become a doctor, a lawyer or many other professional occupations. It was prohibited to observe the laws of Judaism or to marry in a Jewish ceremony. As a result, a talented and intelligent population had to take on positions of low stature or flee the country altogether. My father was one of the very few successful Jewish businessmen in the Ukranian city of Chernovitz. My parents had built a comfortable home for my two younger siblings and me. Knowing that the prospects for Jews were significantly limited, they made the difficult decision to immigrate to the United States.

When America opened its gates to immigrants from the Soviet Union, these people embraced this astounding opportunity. Russian Jewry, including my family, saw it as a chance to achieve many great things. Not only was it an opening for economic prospects, but it also offered hope for a brighter future. They had been dreaming that their families and their children might live in a country without restrictions, having rights to religious, political and economic freedoms. Russian Jews, with the exception of a few, did not take this opportunity for granted.

Upon coming to America, and after some time had passed, Russian Jews started reveling in their new freedoms. Being deprived of some basic rights in the former Soviet Union, many have taken it upon themselves to bring their children and families back to their Jewish roots. Some observe the traditions of the Sabbath and joyfully celebrate Jewish holidays. They have instilled good values in their children, such as the importance of higher education, morals and respect for their elders. Their pursuit of economic success, which is often misinterpreted as pure materialism, is a sort of reaction to the deprivations they faced in the former Soviet Union. In order to prevent their children from experiencing the same hardships, they strive for financial security. Most members of this younger generation of Russian-American Jews attend colleges, and almost all go on to pursue graduate degrees.

Russian Jews are not the shallow, primitive or superficial people described in this appalling show. “Russian Dolls” does a great disservice to the community by portraying Russian Jews in such a demeaning manner. It does exactly the opposite of what it is supposed to do: There is no reality to this reality television show; it is just plain caricature.

Inna Vernikov is a law student at Florida Coastal School of Law.