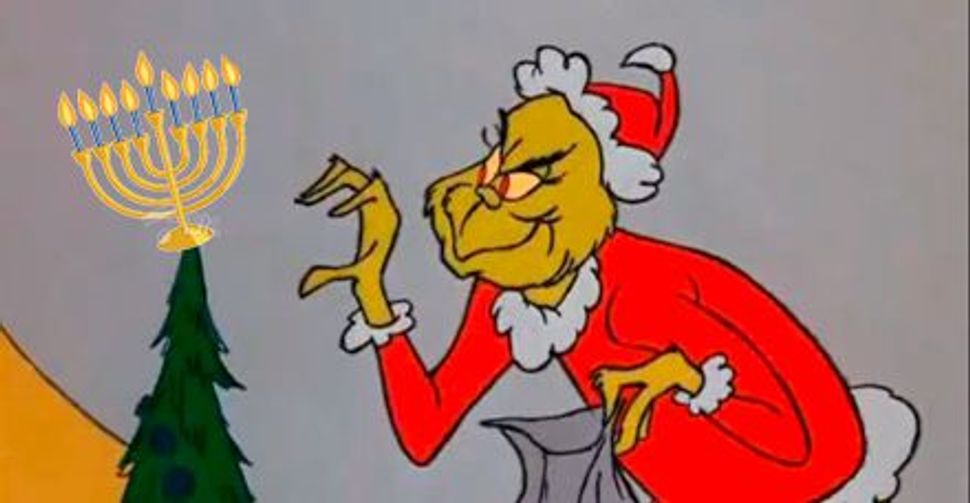 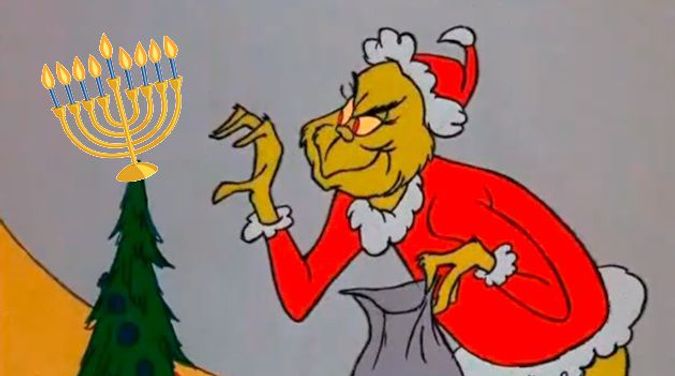 And that was the sentence that launched a thousand lips.

I encapsulated my feelings on Jews and Christmas in a blog post I wrote for Kveller, a Jewish parenting website for which I am a contributing editor. I wrote that “if you really look at the meanings of the holidays, there is a fundamental cognitive dissonance that can’t be reconciled. Specifically: The entire point of Hanukkah is to celebrate people who died rather than practice any religion other than Judaism. And to celebrate that and a holiday that celebrates the birth of someone who Christians believe is the son of God does not make sense.”

Christmas is a Christian holiday and, in my opinion, should not be celebrated in a Jewish home, even by an intermarried couple. This does, after all, seem to be the message of Hanukkah itself. “The Maccabees would rather die than observe any religion other than their own — they recognized that they would and could not be anything other than who they were, Jews,” I wrote. “And it is that determination to be who we are and no one else that is what we are celebrating when we celebrate Hanukkah. It’s not presents, not the endless Jewish song YouTube videos and not the ‘holiday spirit.’ What we are celebrating, I’d argue, is bravery and defiance in the name of protecting our Judaism and who we truly are. That is the true miracle. The miracles are those lights of people’s Jewish identities, fighting against the darkness of the rest of the world that threatens to consume them.”

The post went up on December 14. By the end of the weekend, the piece had elicited an extraordinary response online, covering the spectrum of approval to disapproval. More than 1,000 people had linked to the essay on Facebook.

There were those who said there is nothing “wrong” with intermarried, non-Jewish parents sharing their traditions and faith with their Jewish children. Others argued that Christmas has, in America, become a secular holiday akin to Halloween or Valentine’s Day, and therefore it is perfectly “kosher” (my word choice), particularly for a more secular-leaning Jew. “Jordana, what you’re doing with this piece is really the most divisive thing that Jews do to other Jews these day, which is to tell your fellow Jews that they are not ‘Jewish enough,’” one writer commented.

Even the reason that the piece triggered such a deluge of commentary is up for debate, depending on your perspective. Over lunch at a kosher restaurant, an observant friend of mine said: “You know why people responded that way to your post? Because they know they’re doing the wrong thing by putting up a Christmas tree in their home, and they feel guilty about it, and ashamed of themselves.” But in an e-mail correspondence with someone opposed to the piece, I was told that I was to blame for the volcanic response, because my prescriptive posture of what people “should” or “shouldn’t” do was a hurtful one.

And what do I think now, with a few days removed? Well, I don’t think that I single-handedly divided the Jewish community as much as I highlighted a split within it — and it’s a Grand Canyon-sized rift that will not go away simply by us refusing to acknowledge it, and one whose dangers can be dealt with only by facing it full on.

All over modern America there are many, many intermarriages and many, many unaffiliated Jews. I was recently in Los Angeles, and while driving around Beverly Hills I saw many homes with Christmas wreaths on their doors just inches away from mezuzahs. To riff off Ben Franklin, I’m not entirely sure if those doors I saw are open doors or closed ones.

There are those who contend that those doors are wide open and that cultural fusion exemplifies a brighter future of tolerance and understanding. These people call me, in various words, the Hanukkah equivalent of a grinch, whose dissension is in active opposition to peace, love and all things good. Contrary to my detractors’ suppositions, though, I’m very much a proponent of tolerance, and believe that a pluralistic Judaism is a strong Judaism.

That being said, though, I do feel strongly that it is incumbent upon each of us to closely examine what he or she does — and does not do — Jewishly, what that means to each of us and why. My fear, and one that I expressed in my original piece, is that a Christmas-tree-in-the-living-room tolerance seems to stem from a lack of understanding of Judaism: that it’s evidence of confusion rather than of fusion. In efforts to be everything to everyone, I wonder if we, as Jews, risk dissolving into nothing.

I still feel strongly about this, but I was challenged by the responses to the piece and was forced to examine my own views — as were, I believe, its readers. In a way, the discussion the piece triggered was so much more valuable than the piece itself. People read it and responded — viscerally, passionately, defensively, eagerly — all in an effort to explain their viewpoint to others, and possibly, even to themselves. Just like in the time of the Maccabees, we all ended up asserting anew our boundaries and sacred spaces. And that was, although not in the same way as in days of old, its own rededication.

Jordana Horn is a lawyer, journalist, aspiring novelist, and many other things, but is not celebrating Christmas.