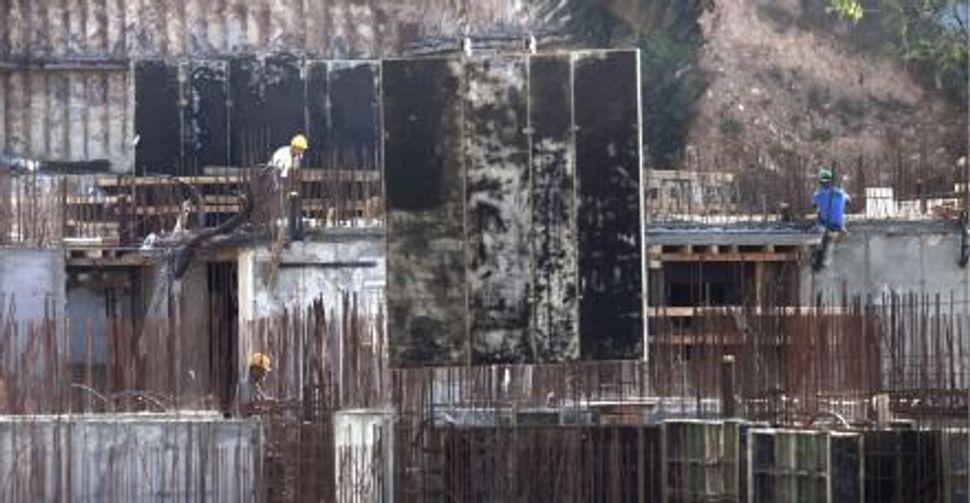 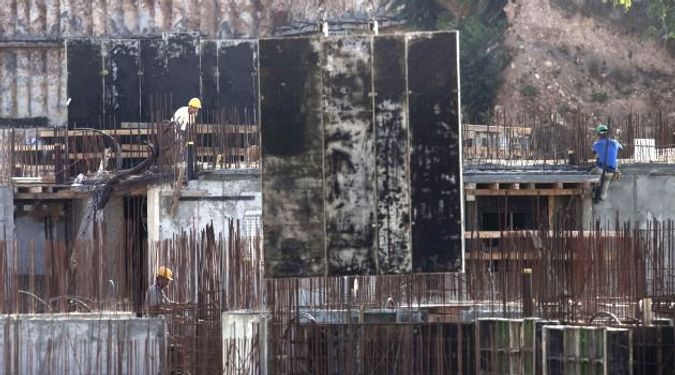 Cutting Off Peace: Frenetic construction in and around Jerusalem is aimed at cutting off the Palestinians in the city from the rest of the West Bank. This will make a two-state solution next to impossible, which is the goal of many right-wing proponents of the building frenzy. Image by getty images

Here’s a “sign of the times” factoid: In recent commentary on Israel’s settlement policy, the number of Jewish settlers beyond the Green Line has ballooned to 600,000 from 350,000 or so. It is as if there had suddenly been a mass immigration to the West Bank. But there has been no such immigration. What there has been, more ominously, is the inclusion in “beyond the Green Line” of two venerable major neighborhoods that had long since come to be regarded as part of Jerusalem proper: Ramot and French Hill, as well as other neighborhoods, such as Gilo, Pisgat Ze’ev, Ramat Shlomo, Har Homa.

Ramot and French Hill are, indeed, beyond the Green Line, Israel’s 1967 de facto border. But they were also beyond controversy. No one who thought about them — and hardly anyone did — regarded their fate as part of a future negotiated settlement between the Israelis and the Palestinians. Their provenance may have been problematic, but their destiny was not.

And now, simply by absorbing their inhabitants into the estimate of Jews beyond the Green Line, the period after their names has been replaced with a question mark.

This needs to be said as urgently and as clearly as possible: Israel’s settlement policy in and around Jerusalem is not merely controversial; it is calamitous. Unless it changes, it will render impossible within a year a two-state solution to the conflict.

There are people, here in America and in Israel, who will celebrate that. They are comfortable with the prospect of de facto or de jure Israeli rule over, even annexation of, the entire West Bank. They are prepared to live with an apartheid state in which a large Palestinian minority is deprived of equal rights, or with a mass emigration of Palestinians, “encouraged” by Israeli actions. And some few endorse a pure binational state, equal rights for all, an end to Israel as a distinctively Jewish state.

But according to survey results, most Jews here and in Israel prefer a two-state solution, even if they think it unlikely in current or readily foreseeable circumstances.

Because my concern here is specifically with Jerusalem and its relevance to a two-state solution, I set to the side all the controversial and all the illegal (according to Israeli law) Jewish outposts and settlements that dot the West Bank, all the violence that emanates from more than a few of them, all the land theft they have practiced and all the current governmental efforts TAKEN? retroactively to legalize them.

In East Jerusalem, the pace of Jewish construction now borders on the frenetic. The goal is so thickly to expand the Jewish presence in what was traditionally the heart of the national Palestinian community and so to encircle the remaining Palestinian neighborhoods as to separate Jerusalem completely from the rest of Palestine. It amounts, from a Palestinian perspective, to a policy of decapitation.

Thus, if building projects now under way or already approved are completed, it will not be possible for Palestinians from Bethlehem to Jerusalem’s south or from Ramallah to its north to access Jerusalem. And if, as seems likely, Israel finally begins active development of the area known as E1, East Jerusalem will be hemmed in on all sides. It will not be available as the capital city of a new Palestine, nor as Palestine’s commercial and intellectual center. The northern half of the West Bank and its southern half will have been bisected; Palestine will successfully have been cantonized, transformed into a set of disconnected towns and villages. Palestine will not be a viable state.

The acknowledged leading expert on what is happening in and to Jerusalem is Daniel Seidemann, founder of Ir Amim (“City of Nations”). In his own writings and in the work of Ir Amim, it is made clear that the grim prospect of a de facto separation between all of Jerusalem and the Palestinian hinterland is no longer a distant hypothetical — it is around the corner. Seidmann himself is convinced that by 2013, currently unfolding facts on the ground will have destroyed the prospect of a two-state solution. (See his report, “East Jerusalem Settlements and the Imminent Demise of the Two-State Solution,” January 2012.)

Those who understand that only a two-state solution can offer Israel genuine security and can protect the ever more fragile prospect of a democratic and Jewish Israel living at peace with its neighbors should be alarmed and make their distress known — to the Obama administration, to their representatives in Congress and to their friends in, and the government of, Israel. Now.