What War on Religion? 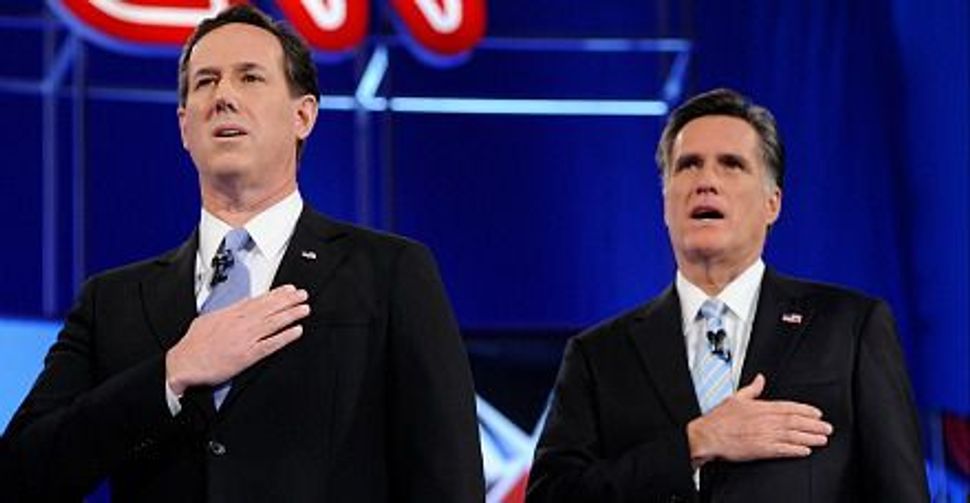 The “war on religion” is back, making its quadrennial appearance on the American political stage. The actors are different this time — or, in the case of Mitt Romney, same man, new script. Rick Santorum’s rhetoric may be more strident than is customary, and Newt Gingrich has lifted the level of disconnect between word and past deeds to dazzling heights. Still, this “war” is a revival of sorts, a recurring theme brought to life by Republicans in national elections for the past 50 years or so, a convenient tool to separate the party faithful from the Godless secularists who have so heedlessly damaged religiosity in America.

Ironically, the trends toward tolerance and inclusion that are reviled by these candidates are the very reason two Catholics and a Mormon can run for the highest office in the land without their respective faiths presenting much of a political impediment. Either the candidates are all willfully ignorant of American history (even the historian!) or they believe the rest of us are.

In his 2005 book, “It Takes a Family,” then Senator Santorum nicely spelled out the conservative rendition of what went wrong with America. It starts with the 1947 U.S. Supreme Court decision that first introduced into law Thomas Jefferson’s idea of a “wall of separation between Church & State,” and turned government neutrality on religion into a constitutional principle. Ever since, Santorum wrote, “The overarching impulse of the Court’s position has been to drive religion from the public square, to secularize our society from the roots up, all in the name of the constitutional principle of ‘neutrality’ — both among religions and between religion and irreligion. Of course, the term ‘neutrality’ does not appear in the U.S. Constitution.”

Of course, “God” does not appear in the Constitution, either. But we digress.

The 1947 decision Santorum referred to, Everson v. Board of Education of the Township of Ewing, was confusing and contradictory, written by Justice Hugo Black, who was known to hate Catholics (and Jews and blacks, for that matter). So it’s understandable that Santorum and others hold it in such disregard. But it was hardly the last word on the tender subject of the relationship between religion and state in a modern, representative democracy.

In fact, the narrative of the “war on religion” conveniently omits other court cases that have sought to map out an appropriate way of welcoming religion into the public sphere. The famous Lemon case created a three-prong test to decide under what circumstances a particular relationship between government and religious activities or institutions is permissible. It must have a secular purpose, neither inhibit nor advance religion, or foster excessive government entanglement.

Rather than the hostility to religion that the current crop of Republican candidates sees in the courts and, by extension, the federal government, there has been a remarkable give-and-take on this issue over the years. But don’t take our word for it. Listen to what John J. DiIulio, a brilliant political scientist at the University of Pennsylvania, a devout Catholic and a Democrat who served in George W. Bush’s administration, had to say in his 2007 book, “The Godly Republic.”

“The contemporary court’s neutrality doctrine has resulted neither in religious establishment nor in strict separation. Rather, it has resulted mainly in faith-friendly equal protection for the godly republic’s multiplicity of sects,” DiIulio wrote.

And that last phrase, multiplicity of sects, is key to our next point. The good ol’ days that preceded this “war on religion” were not always good ones for Catholics, Mormons, Jews, Muslims, atheists or anyone who didn’t ascribe to the prevailing Protestantism that dominated American culture. When Santorum writes that “things changed” for the worse with the Everson decision, when Gingrich assails the 50-year assault on religion, they manage to overlook real assaults on certain faith communities that occurred well before the past half-century. Such as the anti-Catholic nativist movement in the 1840s. And the notorious Blaine amendments — which prohibited states from spending public funds on sectarian schools, but were fueled by anti-Catholic bigotry — dating back to 1875.

The country sure wasn’t neutral about religion then. It was far more biased and inhospitable than it is today.

By acknowledging the greater diversity of religious belief and practice today — the multiplicity of sects — and guarding against the establishment of any religion, even the dominant one, the courts and the federal government have actually opened up more room for faith to flourish. Put another way: Those political candidates who moan about the absence of religion in the public square have to answer, “Whose religion?” Catholics may be ascendant now, with a decisive majority on the Supreme Court and unfettered access to elective office, but that was not always the case in America. One never knows when the new insiders could be pushed back outside again, or when another religious minority may instead feel the heat of social and legal discrimination.

That is why protecting the neutrality doctrine is so essential for American Jews. We should not be lulled into thinking that a break in that wall of separation for something that might legitimately help a good cause — public vouchers to pay for day school education, for instance — is worth the broader consequence. The democratic world is filled with examples of the harm done when religion is privileged even more than it is in this society. The State of Israel confronts this every day.

Imperfect though it may be, the modern intepretation of the First Amendment has enabled Jews and so many others to flourish in this faith-friendly country. To say otherwise is to dishonestly manipulate the historical record and twist America’s core values. Let those on the campaign trail never forget that they, too, are the beneficiaries of the religious tolerance that is the hallmark of this nation.

What War on Religion?