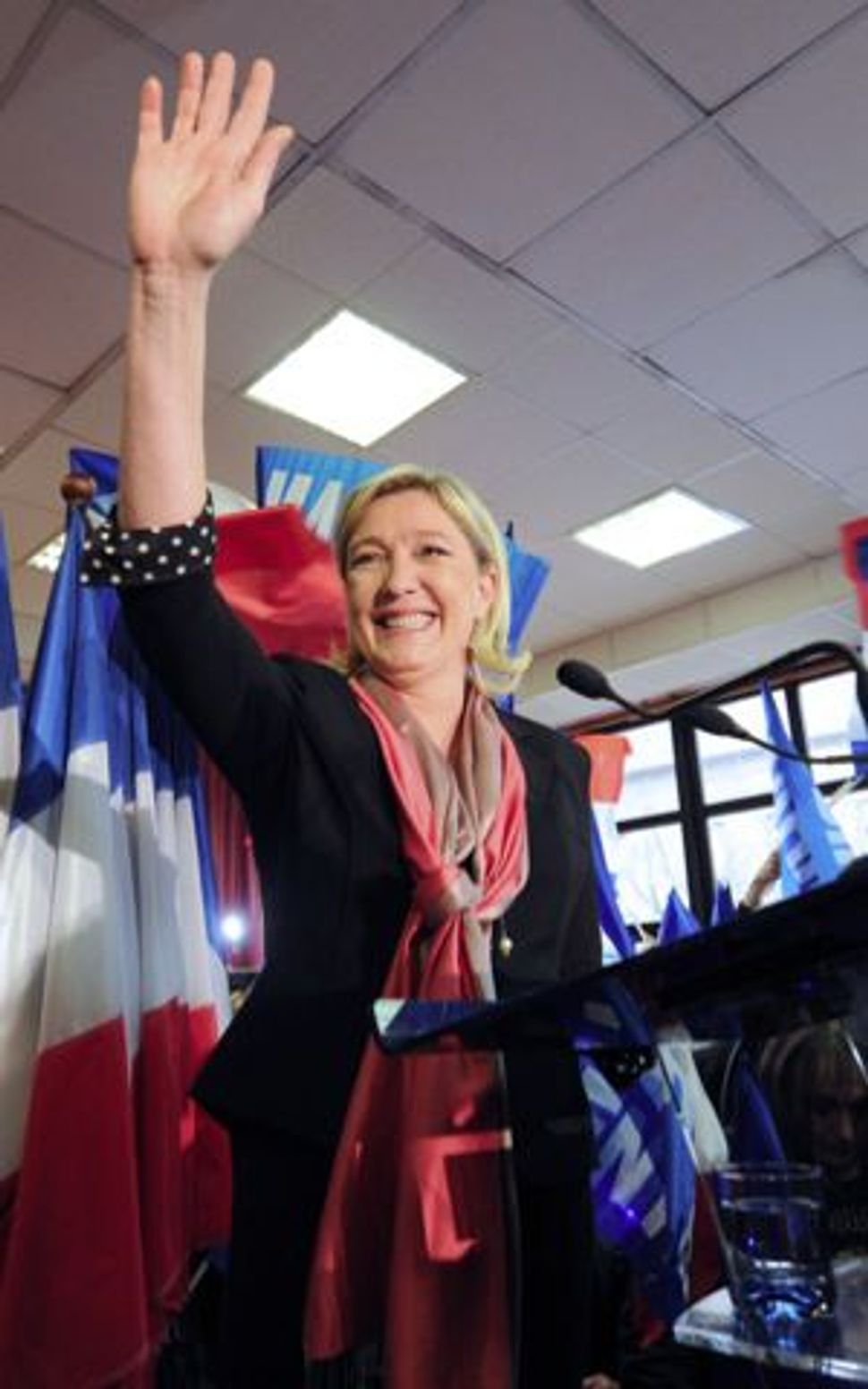 We all know politics makes for odd bedfellows. Just how odd, though, was revealed in this morning’s news. The presidential candidacy of Marine Le Pen, leader of the extreme right wing Front National, has just been made possible by a French Israeli citizen.

In order to run for president in France, an individual must secure five hundred signatures from elected officials serving in local or national office. This constitutional requirement was, in principle designed to prevent “frivolous” candidacies from making a mockery of the deadly serious business of electing a president. Given that this year’s candidates include Madame Cindy Lee, the scantily-clad nominee for the Party of Pleasure, and Dédé de l’Abeillevaud, the bee-costumed representative for a bio-diversity movement, the law has not quite had its desired effect.

Unless, that is, you are Madame Le Pen.

For several weeks, the FN candidate had been scrambling to find five hundred officials willing to sign her petition before Friday’s deadline. Le Pen’s mad dash has made great copy for the media. There was, after all, the striking disparity between Le Pen’s solid ranking in national opinion polls — shifting between 16% and 20% — and her difficulty in convincing a mere 500 officials, out of a pool of 42,000, to endorse her candidacy. Were officials reluctant to be identified with Le Pen? (By law, the names of those who sign are a matter of public information.) Was President Nicolas Sarkozy’s party, the UMP, twisting arms to prevent officials from signing? (The hemorrhage of traditional UMP voters turning to the FN has become an acute concern for Sarkozy.) Or was Le Pen simply gaming the system and waiting until the last moment in order to depict her candidacy as one the traditional parties wanted to suffocate before the voters could have their say?

The questions are now of a different order: Why did Sylvain Semhoun, who represents Israel as a deputy in the Assembly of French Citizens Living Abroad, elect to be the official to push Le Pen’s campaign over the bar of 500 signatures? According to Semhoun, the reason is simple: “Civic duty.” As he told a journalist from the magazine Le Point, “It would have been intolerable to see millions of voters deprived of their preferred candidate.” Semhoun added that political battles are best fought at the ballot box, not in the street.

And yet, simple answers are rarely simple. In 2007, Semhoun had campaigned for Sarkozy and was an active member of the UMP. But his enthusiasm, it appears, could not withstand the serial disappointments of Sarkozy’s presidency. The president “did not keep all of his promises” — most important, it seems, his promise to “recalibrate France’s position on the Arab-Israeli conflict.” It is not clear if Semhoun means by this the widely perceived sympathy for the Palestinians at the Quai d’Orsay (France’s Ministry of Foreign Affairs), the French government’s criticism of Israel’s settlement policy in the occupied territories, or both.

Nor is it clear what Semhoun thinks about Le Pen. On the one hand, he supported her candidacy out of a sense of civic engagement; on the other hand, he doesn’t rule out supporting her in the elections next month. He is waiting to see “all of her policy statements” before he decides, all the while denouncing the “prejudices” Le Pen has received from the media.

There has been much discussion of late in France over Le Pen’s efforts to woo Jewish voters. It may well be that as turns Semhoun next month, so turns part of the French Jewish community.