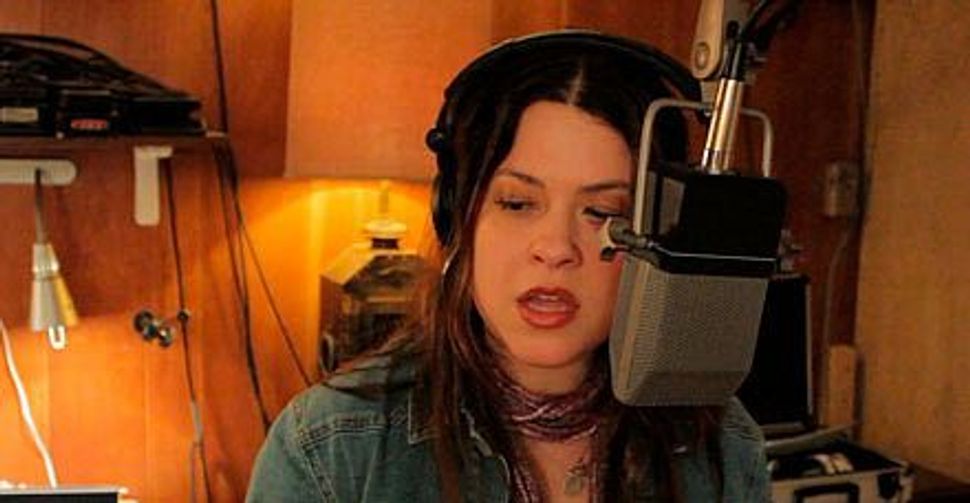 There are times when beautiful, soulful music can transport us to a new and challenging place, a place we might never have visited were we not swept along with song. Neshama Carlebach performs that sort of music — when, for instance, she mixes ancient Jewish tropes with the pulsating rhythms of an African American Baptist choir, creatively pushing the boundaries of expectation.

The Forward thought there was no better artist to launch a musical conversation about whether and, if so, how the words of “Hatikvah” could be altered to include all Israel’s citizens.

We recognize that any suggestion of tampering with a national anthem is fraught and must be approached with sensitivity, and “Hatikvah” is more than an ordinary, patriotic song. Its haunting melody and lyric act as a spiritual connector throughout the Diaspora, an expression of solidarity and yearning. It is sung at synagogue assemblies and at the end of Passover Seders. Sometimes, it takes on the mantle of prayer.

But that is how we, as American Jews, relate to the song. It is not how Arab Israelis, one-fifth of the population, hear the words — which is why this sizable minority often stands in silence when the anthem is sung, as Supreme Court Justice Salim Joubran did at a recent public ceremony. As Philologos, our language columnist, wrote afterward: “How, really, can one expect an Israeli Arab to sing about a Jew’s soul stirring for his country?”

“The successful integration of Israeli Arabs into Israeli life, on which the country’s future depends, has to have its symbolic expression, too,” Philologos continued. “It’s unacceptable to have an anthem that can’t be sung by 20% of a population. Permitting it to stand mutely while others sing is no solution.”

So he proposed a solution, a careful adjustment of a few problematic words and phrases. In the opening stanza, “nefesh yehudi” becomes “nefesh yisra’eli”, the soul of a Jew becoming the soul of an Israeli. And the eye that “looks for Zion” (“le-tsiyon”) can be altered to yearn “for our country” (“l’artseynu.”)

Then in the closing stanza, he suggested a skillful blend of the current language with the words of the original poem from which the national anthem was taken: “Od lo avda tikvateynu, / ha-tikvah ha-noshana, / lihiyot am hofshi b’eretz avoteynu, / b’ir ba david, David hana.” That is, “We have still not lost our hope, / our ancient hope, / to be a free people in the land of our fathers, / in the city in which David, in which David encamped.”

When Carlebach volunteered to record these words, beautifully accompanied by piano, bass, guitar and drums, she transformed the lyric again, singing the alternative version with a new ending and with the current one, reflecting her own sensibility. And then she offered her rendition of “Hatikvah” as it is sung now.

Only by hearing the words can we fully comprehend both the magnitude of the change and its inherent possibility. This recording is but one example of how music can travel through time, accomodating to new circumstances while maintaining its grasp on history and heritage.

Although “Hatikvah” is sung by Jews the world over, the anthem belongs to Israelis, and ultimately, any change must come from within. While some Israelis berated Joubran for his silence, many others supported him, and still others argued for change. As Merav Michaeli wrote in Haaretz just before Independence Day: “[I]n the rest of the world an anthem is not holy. But in Israel apparently it is, and because of that it has still not been able in its 64 years to understand that its soul is not only Jewish.”

The conversation, like the song, belongs to all of us. No one should be under any illusion that modifying a few words will instantly bring trust and understanding to the anxious Arab minority of a Jewish state still working through its experiment with democracy. As one Forward reader commented, “Let’s solve the conflict, then we can agree on what to sing together.”

But never underestimate the power of music to bind a nation, express its loftiest values and embrace its aspirations. Does “Hatikvah” do that now? And if not, should it?

Use the Comments space to offer links to videos of new versions of ‘Hatikvah,’ to suggest new words for the anthem or to discuss this important issue. You may also send videos or links to [email protected]