What Says the Cynical Palestinian? 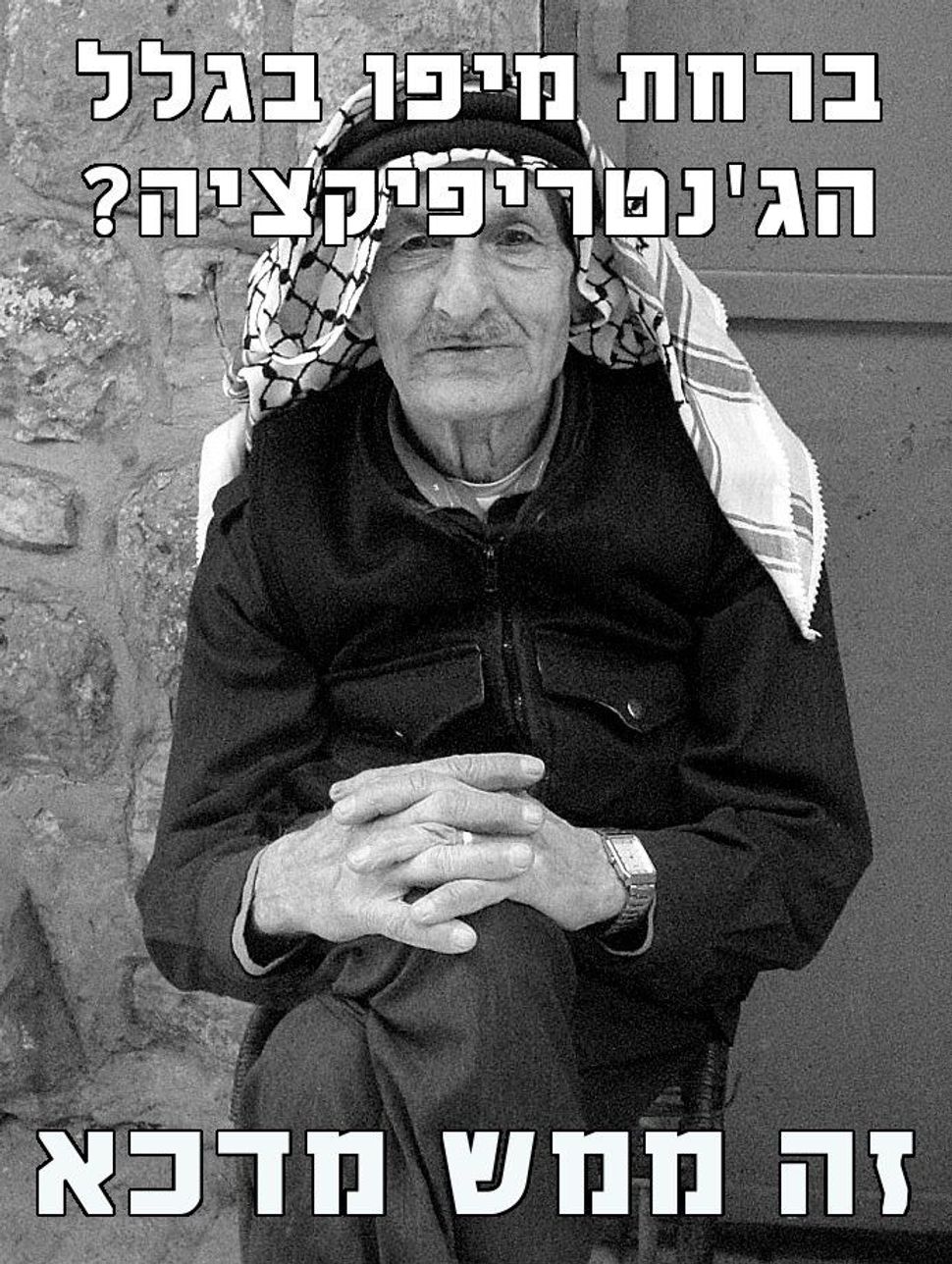 A new Israeli social media meme caught my eye yesterday. Although it was in Hebrew, I felt as though I had seen a version of it in English at some point. It reminded me of the “Unimpressed Native American” meme. You, too, may have come across this meme in your Facebook feed recently. It’s the close up black and white photo of an elderly Native American man in traditional dress. Superimposed on it are cynical and ironic messages like, “The banks take away your home and land from you? That must be tough.”

Instead of a Native American, the Israeli meme has an elderly keffiyeh-wearing Palestinian man staring at the camera saying the same kind of things, only in the Israeli context. It became apparent once I did some digging, that the similarities are not coincidental. “It was the result of an idea by Eli Levin to create an Israeli version for the ‘Unimpressed Native American’ meme,” Shahar Even-Dar Mandel wrote me in an email from Tel Aviv. “After some brainstorming in a ‘secret’ Facebook group, named Oumipo, that included other Israeli meme creators Amir and Shlomit Mahlab Schiby, Itamar Sha’altiel, Ido Kenan and Avgad Yavor, as well as Eli and myself, the concept and the particular photo to be used were chosen,” the 40-year-old physicist explained.

You stood in line for an hour and in the end they didn’t let you into the nightclub? That is really tough.

A lot of bands have recently cancelled their appearances in Israel? I can’t imagine the suffering.

They don’t sell ginger that wasn’t grown in the settlements at any of your local grocery stores? That must really be bad.

You moved out of Jaffa because of all the gentrification? That’s really depressing.

You didn’t get a visa to finish your doctorate at Berkeley? I’m heartbroken.

It’s crowded at Ben-Gurion Airport during the holiday? That’s for sure not easy to deal with.

They closed off Sheinkin St. and you have to take a detour? That’s exhausting.

You’re abandoning your homes and going to live in tents? Reminds me of us at your age.

As I understand the meme, these are Israelis on the far left mocking bourgeois liberals who are focused only on their own economic woes and not on the human, political and economic rights of the Palestinians, as well. But I wanted to check with the meme’s creators whether that was indeed their intended message.

“The main aim of this meme, as we thought of it, is to remind Israelis, especially liberals complaining about real problems they are facing, of the proportions between these problems and those faced by the Palestinians — mostly caused by the same society they are members of,” Mandel wrote.

“Yes, all of us are categorized as far left in Israel, but all of us are also avid supporters of the recent social protest in Israel. We do not intend this meme to mock the legitimate claims of the social protest as merely ‘bourgeois’ complaints,” he clarified. “Some instances of this meme are using truly grave problems (the gentrification of certain areas, the state of Israel’s political system). To some extent I can say that it aims at putting these complaints into the proper proportions, and even points at the way they are all part of the same ills whose center is the occupation.”

Mandel also mentioned that the meme, as well as other ones the group has created, is part of an effort to support a campaign by Gisha-Legal Center for Freedom of Movement against the Israeli government’s decision to prohibit gender and democracy students from Gaza to go to the West Bank to complete their studies.

Mandel reports that within a day of first posting the meme, it has spread beyond his group’s usual circles on Facebook, and a few people have added their own examples. However, as clever as this is, I can’t really see it going viral. First, you need to know Hebrew and to have an insider’s knowledge of contemporary Israeli life to understand what the “Cynical Palestinian” is talking about. But more importantly, given the state of Israeli politics and society, it is doubtful that this small black and white photo will do much in the way of making Israelis focus on the bigger picture right now.

What Says the Cynical Palestinian?