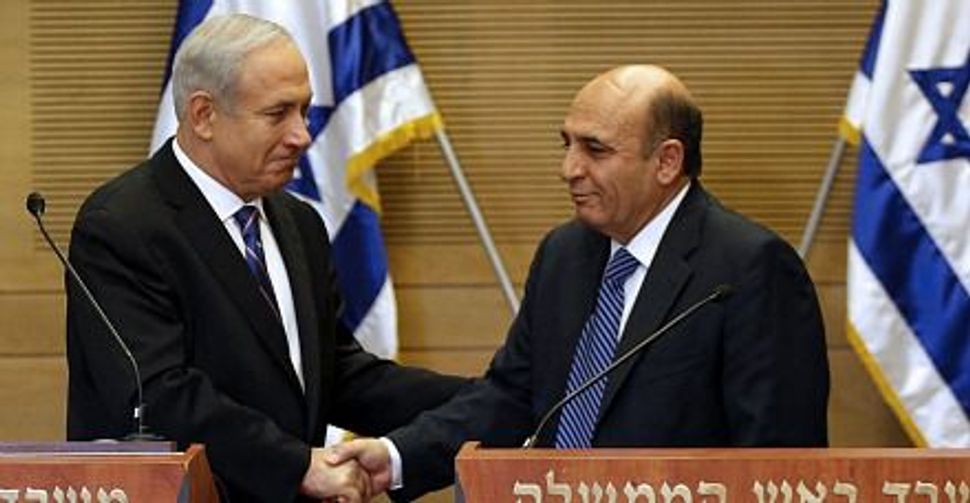 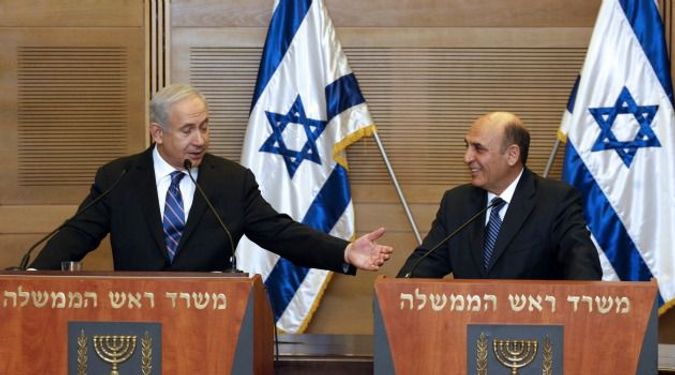 Behind the Deal: Most observers missed the most important aspects of the grand coalition deal struck by Benjamin Netanyahu and Shaul Mofaz. Image by getty images

There are two ways to read the grand coalition deal that Israel’s Prime Minister Benjamin Netanyahu cooked up with Kadima leader Shaul Mofaz on May 8. One is that the wily Netanyahu has once again outwitted his rivals, bought another year as grandmaster of Israeli politics, neutralized the plodding Mofaz and gained almost wall-to-wall backing if he attacks Iran. Mofaz, in this reading, appended his 28-member Knesset caucus to the ruling Likud’s 27 in order to save his neck from a September 4 snap election, which would have cut Kadima’s strength by nearly two-thirds.

This is the prevailing reading among independent observers who didn’t get a spot around the new feeding trough. That’s a pretty limited category, though — mostly limited to the few politicians left in the opposition, plus contrarians, journalists and confirmed Bibi-haters (is that redundant?).

The other reading is that Bibi was headed for a cliff and Mofaz offered him a lifeline that saves them both — in exchange for a hefty turn to the left. Sound impossible? Actually, it’s nigh inescapable.

First, consider the polls. Three different polls released a week before the unity bombshell showed Netanyahu emerging from a September election with the biggest Knesset bloc by far, a commanding 31 seats in the 120-seat house, versus 18 for Labor, the runner-up. Unfortunately, the polls also showed him with a unstable coalition of 61 seats, tops.

Even more alarming was the May 6 Likud convention, where Bibi unexpectedly found himself outflanked by a large, well-organized pro-settler right. Associates say he feared if he won in September he’d end up “a hostage” to extremists unless he found new allies.

Assuming he made it to September, that is. First he has to get past two political landmines planted for him by the Supreme Court. By July 1 he must dismantle five buildings illegally erected on private Arab land in the Beit El settlement. Evicting the 30 families is sure to turn ugly. If he proceeds, he infuriates his pro-settler flank, sparking mass defections to the far right on September 4 and rendering a new coalition even harder. If he defies the court, he faces trouble with Likud moderates.

Then comes the court’s August 1 deadline to annul the Tal Law, which guarantees unlimited army deferments for yeshiva students, and to replace it with some form of universal service. That means either a blow-up with his Haredi/ultra-Orthodox allies — distinct from the modern-Orthodox settler community — or a crisis with his secularist flank, led by Foreign Minister Avigdor Lieberman.

Then there’s the likely indictment of Lieberman in the coming weeks on decade-old fraud and money-laundering charges. This would rattle Lieberman’s 15-seat Yisrael Beiteinu caucus and probably blow a big hole in Netanyahu’s coalition with or without the Supreme Court.

Bringing in Kadima allows Bibi to weather all these crises by giving him a super-broad, defection-proof coalition.

Of course, the unity deal saves Mofaz’s neck no less than Netanyahu’s. That’s the part everyone’s talking about. The common assumption is that Mofaz is cravenly salvaging his career and his party by crawling back into the Likud. This is a reasonable reading — if you don’t know anything about Mofaz.

Remember, this is a guy who has served as defense minister, IDF chief of staff, chief of Central Command (in charge of the West Bank) and a member of the Sayeret Matkal — the same crack commando unit that produced Bibi and Ehud Barak. You don’t build a resume like that by being anybody’s patsy. Those who’ve worked with him call him a thoughtful, fiercely determined strategist and, rare in Israeli politics, a straight-shooter.

Reading the text of the coalition agreement, it’s hard not to think Mofaz got more out of the deal than Netanyahu. Of course, there’s no dishonor in choosing survival over certain extinction. But this does more. It gives Mofaz 17 months to strengthen his image as a serious alternative while leading the Knesset’s largest faction. Netanyahu, instead of obliterating his rivals in September and enjoying a new four-year term, spends the next year and a half sharing power with Mofaz.

On policy, neither partner commits to the other’s views, but Mofaz gains a voice he didn’t have before. He gets a seat on the inner security cabinet, which makes the final decision on attacking Iran. The cabinet has rejected an attack before, under pressure from security chiefs Meir Dagan, Yuval Diskin and Gabi Ashkenazi, but Netanyahu and Barak have been wearing down the resistance and firing the critics. Now, at least, there’s one more vote against a strike.

The coalition agreement promises, without details, to seek renewed peace talks with the Palestinians, aiming for an agreement that ensures Israel’s future as “a Jewish, democratic state.” Mofaz has urged since 2009 that Israel offer the Palestinians immediate statehood within “provisional” borders, and then enter state-to-state negotiations toward a final accord. To allay Palestinian suspicions that the interim borders would become permanent, he’d have Israel commit in writing that a final agreement would be equivalent to 100% of the West Bank, with 1-to-1 swaps. Now he can say it from the inside.

Right now, though, aides say the new government has just two purposes: Replacing the Tal Law and reforming Israel’s byzantine electoral system, to end blackmail by fringe factors. Those issues have hamstrung Israeli governance for years. Netanyahu’s offer to Mofaz created “a window of opportunity for a broad, civic government” to make “historic changes,” Kadima party secretary Yohanan Plessner told an Israel Policy Forum conference call May 9. Kadima is now preparing new legislation to meet the August 1 court deadline. “If Netanyahu will accept a serious proposal, we can go forward.” If not, Kadima walks out.

Plessner isn’t the only one wondering about Netanyahu’s motivations. What will he get at the end of all this? Why invite a rival to sit alongside him and work to undermine his principles? Is he so sure he can outmaneuver Mofaz? Or is it just possible that he sees the wheels of history turning?

Consider this: Netanyahu is often called Israel’s “most American” politician. And in the words of Netanyahu’s great hero, Winston Churchill, “You can always count on the Americans to do the right thing — after they’ve tried everything else.”

It’s been said that Netanyahu would never rethink his views until after his father died. Nobody expected the change would come the day the shiva ended, but hey, life is full of surprises.