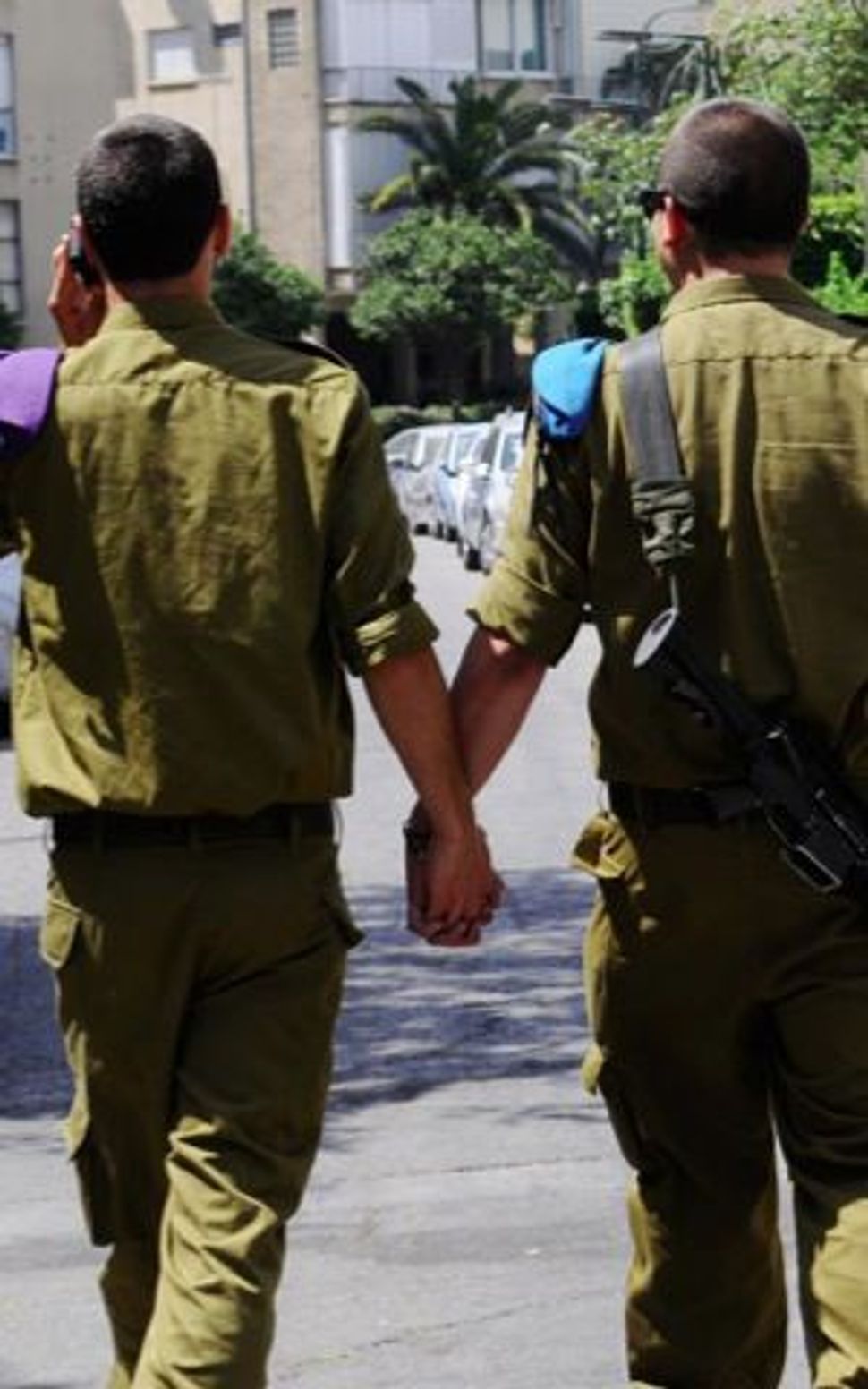 No one should have been surprised that a photo of two male Israeli soldiers holding hands would have gone viral and provoked a huge response after the IDF posted it on Monday on its Facebook page in honor of Pride Month. As of Tuesday evening, it had garnered 9,500 likes, 7,330 shares, and 1,360 comments. Most of the reactions were pretty much expected, but one was not.

Of course, it didn’t take long for the religious authorities to chime in with their disapproval. While the IDF and the Foreign Ministry were proud that they were declaring to the world that Israel treats all its soldiers equally,” the IDF rabbinate was far less so. Behind closed doors, military rabbis were saying that they thought the posting of the photo was inappropriate, because it was insensitive to the feelings of religious soldiers. Such a public display is “confusing for religious soldiers,” they said. “People need to remember that there are religious and Haredi soldiers in the army, as well.” It’s highly unlikely, though, that anyone has forgotten this fact, given the disproportionate influence the religious authorities have had over military life lately.

Then there was the anti-Israel accusations that this was just “pinkwashing in action”—the notion that Israel promotes its image as a country open to and tolerant of homosexuality in order to draw attention away from its policies toward the Palestinians.

My friend Aviad Stier, who lives in Herzliya, told me that he, as a gay man, wasn’t too thrilled with the photo for other reasons. “I wasn’t wild about the picture to begin with, seeing that the soldiers are shown from behind, like the [closeted] 1980’s all over again,” he wrote to me on Facebook. “But I guess it’s nice to know LGBT people are mainstream enough to be flaunted around by the IDF,” he conceded.

It was a no brainer to predict all three of these reactions. But what threw me for a bit of a loop was the prominently placed article on the homepage of The Times of Israel, its headline screaming, “Army’s ‘gay soldiers’ photo was staged, is misleading.” The reporter did some digging and proved that the scene was not spontaneously captured, but rather staged with two men serving in the IDF Spokesperson’s Office (one actually gay, the other straight) posing as boyfriends (or at least two men close enough to be holding hands).

The reporter then went on to laud the IDF for its pro-gay policies (it apparently even has gay affirmative action programs — sort of). So, if that’s the case, then what’s the big deal about the IDF’s PR machine putting out a fabricated image that supports its message? It would have been another situation entirely had the photo been passed off as photojournalism, but the IDF Spokesperson’s Office is in the public relations business, not the one of objective journalism.

Haviv Rettig Gur, director of communications at The Jewish Agency was thinking the same thing I was thinking. “So, to recap, it’s a symbolic gay-friendly photo published by a gay-friendly military that actively teaches its officers to respect sexual difference, and even gay rights groups acknowledge that this army leads the way among Israeli institutions in its acceptance of gays,” he wrote in a comment on the Times of Israel piece. “Why, then, is the headline, ‘Army’s ‘gay soldiers’ photo was staged, is misleading’ when the entire article then demonstrates just how accurate the photo really is?” he asked.

It’s one thing if you really do have religious or political issues with the photo, but otherwise, it’s all much ado about nothing. My friend Aviad could have told you that the minute he saw the picture. “Funny, I showed this picture to a friend of mine, who’s a soldier, the other day, and we both said together: “They’re so clearly ‘jobnikim’ [desk jockeys] from the IDF spokesman’s office,” he said.