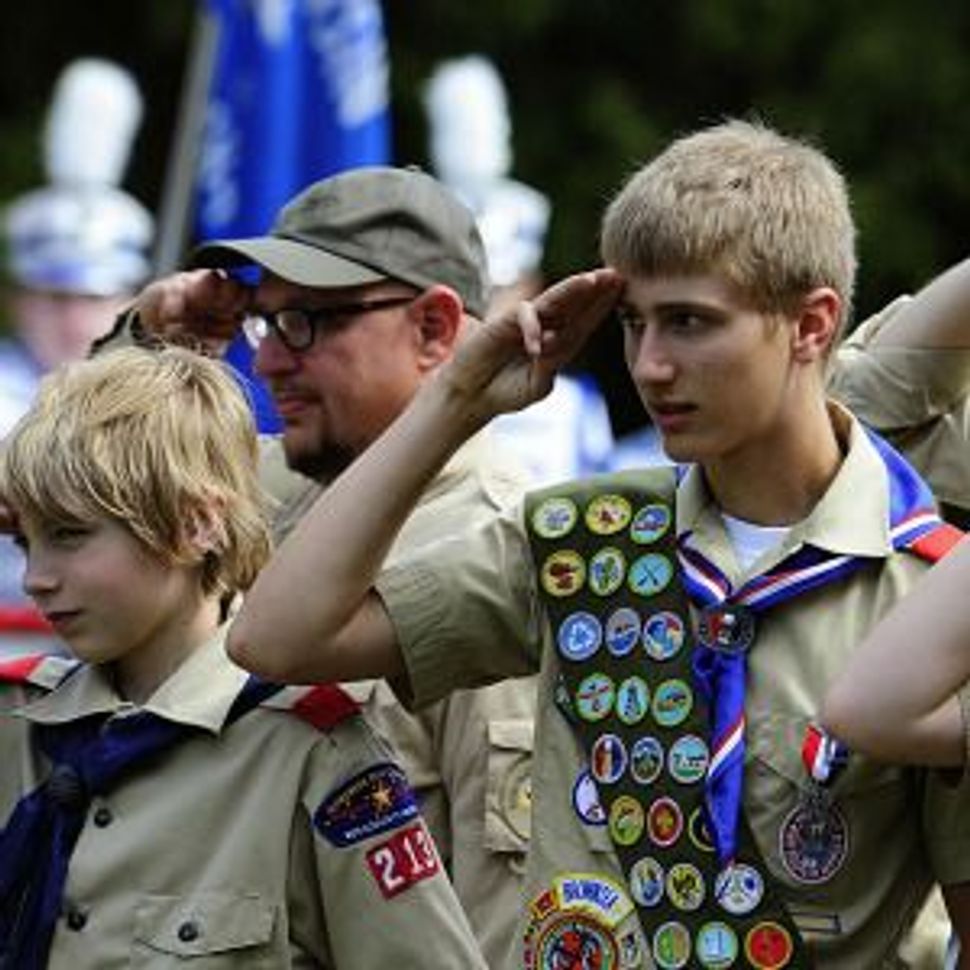 “What is a nice Jewish boy doing in a uniform like this?’” asked Maryland psychiatrist Alan J. Horowitz in his 1986 essay entitled “Reflections of a Jewish Scouter.”

Today, almost twenty years later, it may seem like the Boy Scouts of America may be moving further than ever from Jewish values, as evidenced by the organization’s reaffirmation of its long-standing ban on allowing openly gay men and boys to serve as scouts or scoutmasters.

Editor’s note: It has come to our attention that Alan J. Horowitz, who is quoted in this blog post, is a convicted sex offender. A rabbi and psychiatrist, he was imprisoned for several years after a 1992 child molestation conviction. He was later arrested in India for allegedly violating terms of his parole.

The Boy Scouts’ policy puts it at odds with most Jewish opinion. It also places it outside the mainstream: the Girl Scouts, Boys and Girls Clubs, 4-H clubs, and even the US Military have done away with such discriminatory edicts. In 2001, following a New Jersey Supreme Court’s decision to uphold the Boy Scouts’ right to refuse membership to gays, the Joint Commission on Social Action of the Reform movement issued a memorandum urging its congregations to ask their sponsored troops to rewrite their charters, or to withdraw financial support entirely, calling the ban ”incompatible with our consistent belief that every individual – regardless of his or her sexual orientation – is created in the image of God and is deserving of equal treatment.”

”From a religious perspective, we stand for the notion that all people are equally children of God,” explained Rabbi Daniel F. Polish, the commission’s director. “So if you have a religious movement sponsoring a group with a diametrically opposed set of values, it sets up a terrible conflict.”

With this most recent announcement, it’s possible the numbers will shrink further: a tragic loss for scouts and synagogues alike. But it’s an avoidable one.

The youth institution that teaches its boys to be self-reliant outdoorsmen and responsible citizens has had a strong tie to Jews since the beginning. One year after the program’s founding in 1910, prominent Jewish financier Mortimer Schiff joined Andrew Carnegie and John D. Rockefeller as one of its first major contributors. And two years after that, in 1913, the first Jewish boy scout troop was formed in New York City.

Since then, Jewish scouting has blossomed. Along with merit badges for canoeing, orienteering, and wilderness survival, Jewish scouts can work towards their Maccabee, Aleph, Ner Tamid, and Etz Chaim emblems by studying Torah and learning from a rabbi. Jewish Eagle scouts who demonstrate “practical citizenship in synagogue, school, Scouting unit, and community” can earn college scholarships. And for some unaffiliated Jews, scouting is a first exposure to a cultural and religious heritage they might not otherwise have known.. Scouting is endorsed by the Rabbinical Council of America, the Union of Orthodox Jewish Congregations of America, and the United Synagogue of Conservative Judaism.

For years, since its very inception, the Boy Scouts and Jewish groups have worked together for common goals of practical knowledge, community service, and a true, deep understanding of religious heritage. Understandably, neither side wants to abandon its moral position. But if this crucial synergy that has guided generations of young Jewish men to roles as leaders is to be preserved at all, social progress and inclusiveness must win out. The Boy Scouts must embrace and include the diverse identities of its members when it comes to sexual orientation just as it has since the beginning with religious affiliation.

Only then will all their members, be they straight or gay, Jewish or Christian or Muslim or even not religious at all, be able to understand what it is to be an American scout, a multifaceted product of a multifaceted culture.

As Horowitz writes in the conclusion of his essay: “For once, I have lived an experience in which I could become immersed fully and deeply as an American, a Scouter, and as a Jew.”