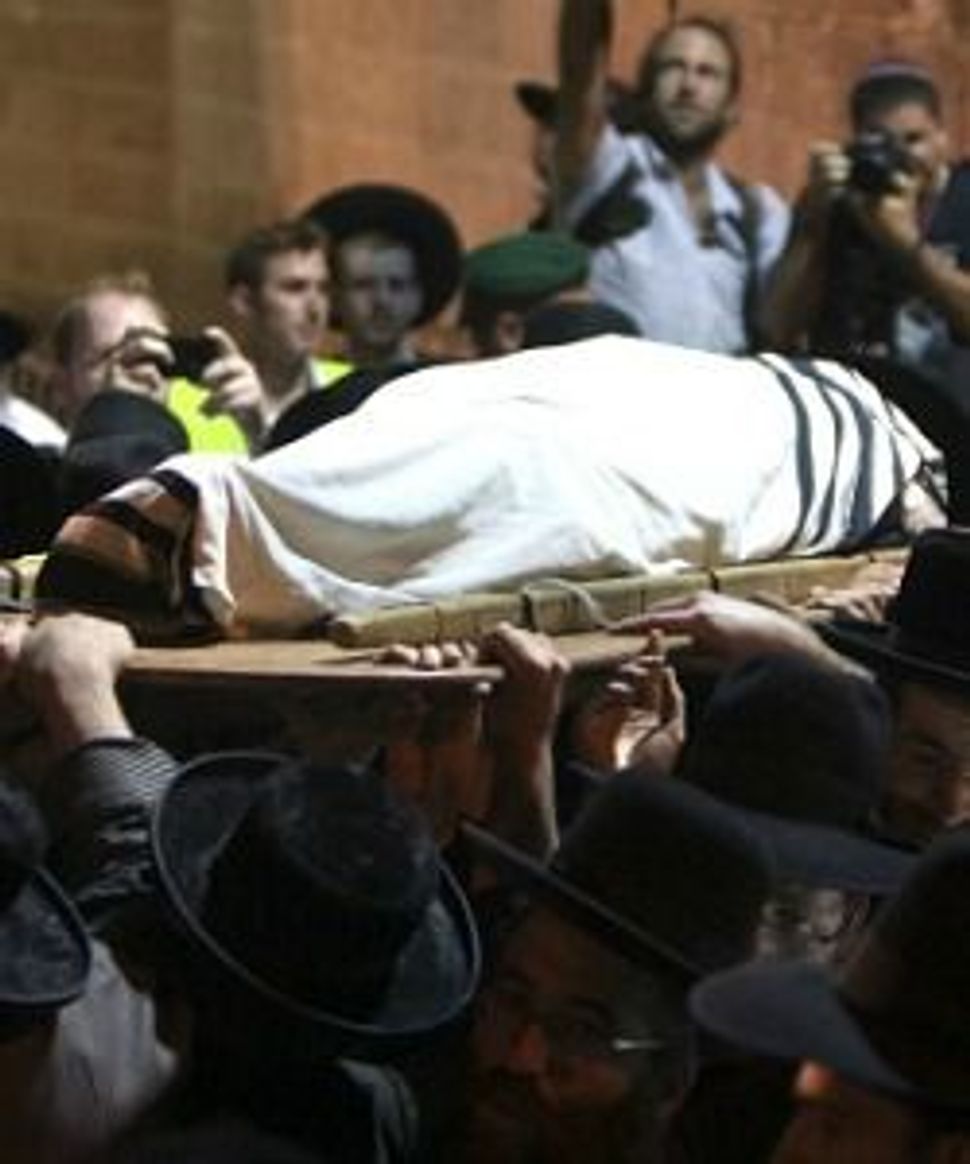 The monochromatic ocean of Haredim at the funeral of Rabbi Yosef Shalom Elyashiv last month concealed a deeper undercurrent of dissent. Elyashiv, the acknowledged leader of the Ultra-Orthodox Lithuanian community, had roped together two competing factions among a group usually seen as monolithic. There are the conservatives, led by Shmuel Auerbach of Jerusalem, as well as a more liberal faction led by Aharon Leib Shteinman of Bnei Brak, with the support of Elyashiv’s son in law, Chaim Kanievsky.

Now, the animosity and infighting between the two groups has spilled into the public sphere with anonymous pamphlets now being published and a level of hostility not often seen in the Haredi world. While the past few days have seen attempts by both sides to walk back the animosity and impose some kind of truce, the very open rift exposed in the pamphlets could prove difficult to paper over.

In the months before Elyashiv’s death, control of the main Lithuanian Haredi newspaper, Yated Ne’eman, was wrested from the Auerbach faction by a group loyal to Shteinman. As Elyashiv slipped in and out of consciousness, his son in law, Kanievsky, threw his support behind Shteinman’s takeover. At first glance, Shteinman may seem like an unlikely moderate. He was put on the Council of Torah Sages of the separatist Degel party by its founder, Elazar Menachem Shach. But in the Haredi world of today, Shteinman represents a slightly more moderate approach.

The pashkevil, or anonymous pamphlet, republished on the Haredi blog hirsheltzig.com, begins by assuring us that it doesn’t mean to impugn Shteinman’s “Torah, fear of heaven, or that his actions are all for the sake of heaven,” before going on to impugn just that.

The pashkavil says how Shteinman isn’t enough of an extremist. Approached to discuss the dangers of the Internet, Shteinman is reported to have responded that “if there wasn’t this yetzer hara (evil inclination) there’d be another yetzer hara.” Shteinman hasn’t ever agitated for “kosher” cell phones, we are told, and he met with representatives of Chabad, who are persona non grata for the more extreme faction. He told Yated not to write against the “New Haredim” — that is, Haredim who enter the workplace — because “it would only alienate them.”

The writer of the pashkevil asks if this is characteristic of all great rabbis who fought against “Reform, Zionism, the Mizrachi, Poalei Agudat Yisrael etc.” When approached by people from a neighborhood beset by many tragedies, wondering how to address their misfortune, he told them to be careful not to insult one another and to be nice to each other. “Where is the chizuk (encouragement) about bittul torah (wasting time from learning Torah)? About the Internet? About non-Kosher workplaces?” the pashkevil asks. Indeed, it asserts, “He only girds himself for battle in regards to commandments between man and his fellow man.”

According to the pashkevil, Shteinman doesn’t seem to have enough of a problem with people working for a living. “People asked him about 100% non-kosher workplaces and he answered that, if you have no money, then it’s not a problem.” He isn’t opposed enough to the army — he thinks yeshiva students who aren’t learning well can join the Haredi units. According to the paskevil “all haters of religion rejoice” at Shteinman’s pronouncements. “They write on their websites that we finally have a liberal leader who we can deal with.”

Is that actually the case? It’s hard to say. Auerbach may be taking stock of his losses. He had a brief conciliatory meeting with Kanievsky a few weeks ago. Just yesterday though, a high level meeting of the council of Torah Sages including Auerbach and Shteinman was cancelled at the last minute. Auerbach wanted to add his people to the guest list, and Shteinman didn’t acquiesce.

Benny Brown, a professor at Hebrew University who has written extensively on Haredi society, thinks the split between Shteinman and Auerbach augurs a major change in the Haredi world. “For the first time in the litvish [Lithuanian ultra-Orthodox] world there’s a move towards democratization,” he said. According to Brown, the choice between Auerbach and Shteinman means there’s “alternative leaders, choice and competition” and that Haredi leaders will have to have to be more responsive to their audiences to gain greater market share.