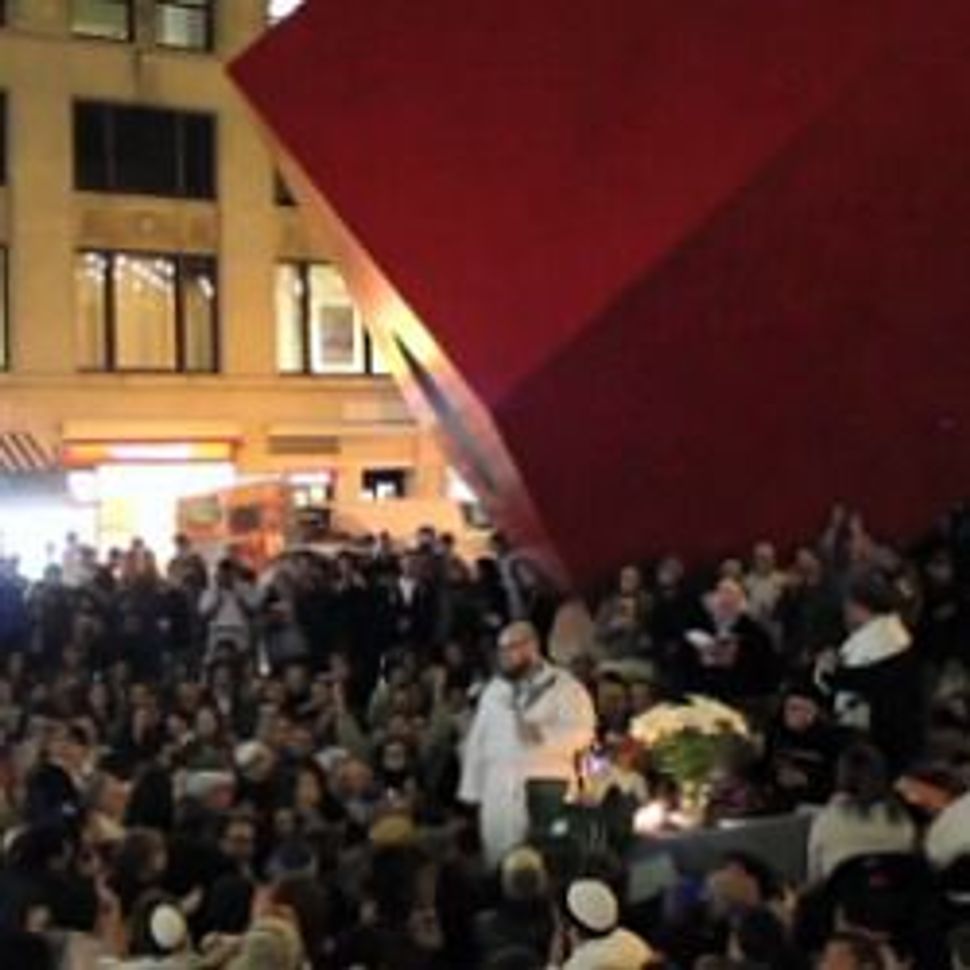 September 17, the one-year anniversary of the launching of the movement/mood/fracas, has been declared the Occupy National Day of Action. September 17 — or #S17, as it has inevitably been hashtagged — also happens to be Rosh Hashanah. And so, inevitably, Occupy Judaism has announced that there will be a Rosh Hashanah service and potluck in Zuccotti Park as the new Jewish year of 5773 opens on the preceding night, September 16.

Like the Occupy movement as a whole, Occupy Judaism mostly hibernated for the winter, along with the spring, and the better part of the summer. But the slumbering giant will reawaken soon. But when the discontented beast of the Occupy movement reemerges, will it regain its former strength? Will it still have a hold on our political consciousness and the national conversation? And in the case of Occupy Judaism, did it survive the attempts last year to use a few anti-Israel voices within the mixed multitude of the occupiers to discredit the Occupy movement among Jews?

Last year, I wrote somewhat ecstatically about a Kol Nidre service and the exuberant throng that gathered for it across the street from Zuccotti Park. I never thought of myself as a member of the Occupy movement, but I do think rich people should pay higher taxes and I do think banks have overstepped the bounds of reason a few times too many in recent years. And I’m always game for a novel Jewish ritual experience.

I spoke with Occupy Judaism organizer Daniel Sieradski. He reminded me that a recent Workman’s Circle survey shows that I’m not alone in my feelings about taxing the rich and the preponderance of poor judgment in American banking. In fact, the survey found that most Jews agree with me about those issues, which are also the central issues of the Occupy movement. Nonetheless, I have to wonder if Jews will get as excited about occupying High Holidays as they did last year. The collective outcry in the streets is long gone — or at least not as loud as it was a year ago — and the Occupiers have long since been exiled from Zuccotti Park.

“Occupy Judaism has died down quite a bit. That said, the Occupy movement has died down quite a bit. There’s a variety of reasons for that,” Sieradski told me. But they haven’t just been sitting on their hands all year, he said. “They’ve still been active, even if it’s been in smaller numbers. When they’ve had a big action, people have showed up. The idea is that September 17 you’ll see a lot of people coming out into the streets.”

But how can they recapture the explosive energy of last year’s Occupy Yom Kippur service? Sieradski agreed that this was a worthwhile question. “I don’t know if we can recapture precisely the same energy as last year. It’s a good point that you’re not gonna have those people in the park and that spontaneous energy that you had last year,” he said. But he still believes there will be hundreds there – though definitely fewer than last year. About a hundred volunteers are already signed up, he said.

Occupiers criticized the outside world last year for missing the point when journalists, pundits and politicians were repeatedly baffled by the absence of a coherent platform or list of demands. Likewise, maybe I was missing the point with my line of questioning about numbers and replicating the same atmosphere as last year’s Kol Nidrei service. As soon as Sieradski got done humoring my questions about attendance, he said this: “We’re still doing this without a permit, as an act of civil disobedience. We’re still doing prayer as an act of protest, praying with our legs, as it were. That’s still pretty powerful.”

He also pointed out that some may be wooed back by the fact that this service will not be entirely under the Occupy tent. “This will be separate, a Jewish action. Even though some of us have soured on that larger Occupy movement, this will be powerful,” he said.

For Sieradski, if Jews still believe that the financial system is corrupt, then we are still obligated to do something about it. “It’s still incumbent on us to get out there and speak up,” he said. “I still think the most powerful thing you can do with your prayers is uphold the dignity of those who are in need, and that’s what we should be doing instead of having spectator sport-style congregations where we just sit down and listen to a cantor and phone it in.”

Speaking of which, who is going to lead this Occupy Rosh Hashanah service? Last year’s Occupy Yom Kippur leaders were terrific, an assortment of lay leaders and rabbinical students. “Most of the people who did the service for last year for Yom Kippur are already booked for Rosh Hashanah,” Sieradski told me. “But they’re coming back to help craft the service. There are some other people who are gonna be involved in leading. But it’ll be what it’ll be and who shows up will be who shows up.”