Hitting The Road for ‘Tax Fairness’ 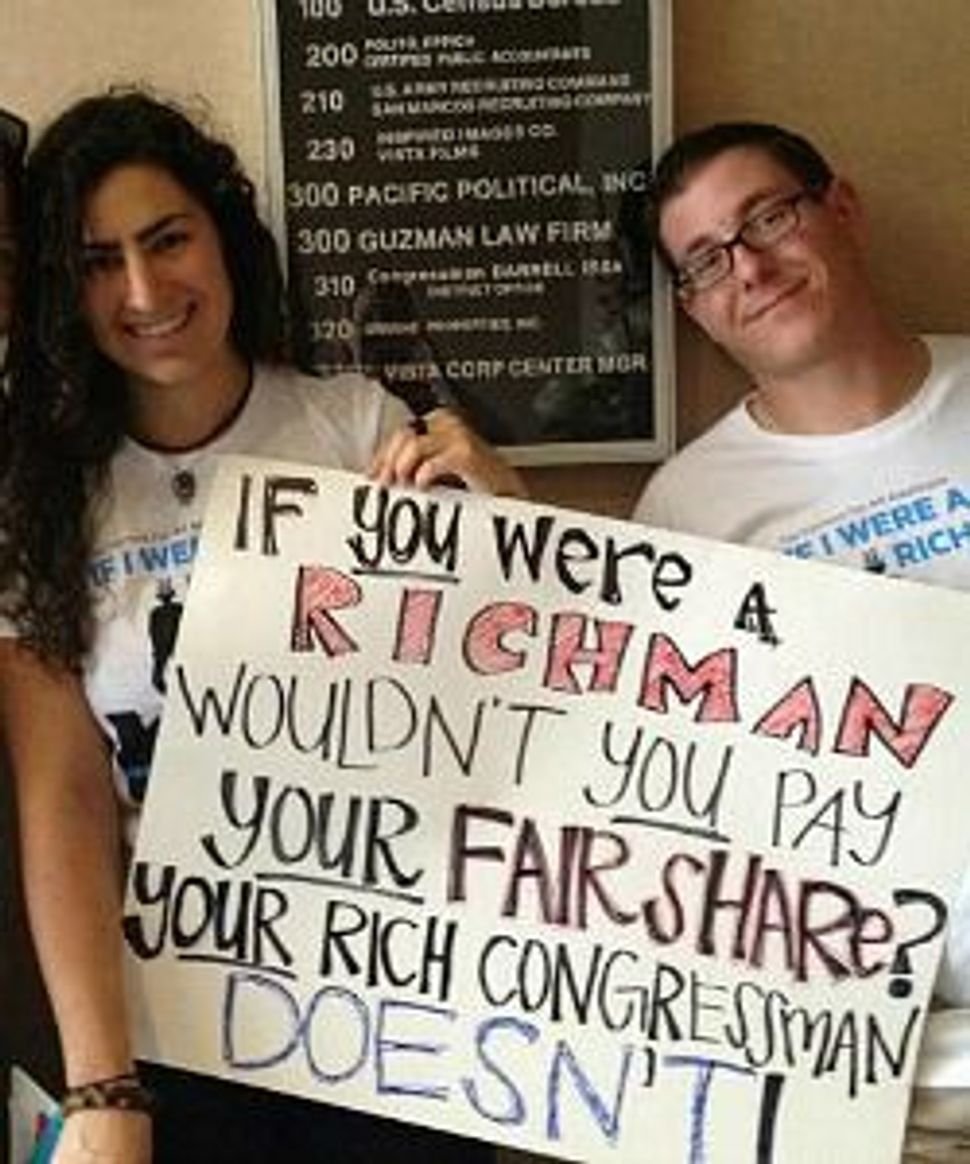 “There’s no gap in the community to make the world better,” Van Capelle said at a reception for the “If I Were A Rich Man Tour,” on Thursday. “We don’t sit on the sidelines.”

The “If I Were A Rich Man Tour” is a project of Bend the Arc, a liberal Jewish group that advocates for domestic social justice. The trip began on August 22 and took a diverse group of Jewish activists on the road to raise awareness about “tax fairness” in congressional districts around the country, to “stop talking about tikkun olam and start doing,” according to Van Capelle.

Doing, in this case, means asking some of the wealthiest members of Congress from both parties why they continue to support Bush-era tax cuts for those earning over $250,000 a year. It also means starting conversations with ordinary people about why they feel it’s important to pay their “fair share” of taxes.

Rabbi Margie Klein, a tour participant from Boston, said traveling and hearing stories from across America was what drew her to the project. She also felt a connection to her Jewish faith. “As a Jew, I’ve been taught that I am connected and responsible for everyone else,” she said.

“It’s empowering and encouraging,” to hear stories from across the country, said Ellie Axe, also of Boston and the project’s team leader. “It’s thrilling to fight for what is critical.” And while on the road, “the adrenaline doesn’t stop.”

The reception in Charlotte was the final stop on the two-week tour, which also included stops in California, Texas, Ohio, and a visit to the Republican National Convention in Tampa. Yet despite their liberal politics, all participants agreed the reception for the tour had been overwhelmingly positive, in blue states and red.

Yitz Jordan, a participant and hip-hop artist from Los Angeles who performs as Y-Love, said that sticking out actually did the group a favor.

“Here comes this multiracial, gender variant guy with a purse,” he said of himself. “Before we’re even identified as Jewish, we’re already motley. But it only brought positivity. It was a conversation starter. The ice was broken.”

Besides approaching people to talk personally, the group also made signs (“Honk if you love tax fairness!”) and a wall for others to sign with their reasons for paying their “fair share” of taxes.

Van Capelle sees the project as an important manifestation of Bend the Arc’s mission, which he has called “unapologetically progressive but also smartly pragmatic”. The group, which takes its name from a quote from Martin Luther King, Jr., focuses on domestic issues to change the perception that Jewish Americans are one-issue (i.e., Israel-centric) voters. Other campaigns include the “613 pledge,” a push to get 613 wealthy American Jews to publicly call for higher tax rates on their income bracket.

For Los Angeles film producer, DJ and “artivist” Tera Greene, being on the tour was a chance to have cross-cultural and cross-ideological discussions. “I spoke with a Republican guy in one town, and by the end, he was thanking me for the conversation,” he said. “People will pour out.”

The bus tour’s “unusual” model was no coincidence, either. Klein, who called herself a proponent of “faith-based civil rights,” called the tour a chance to emulate civil rights activists like Rep. John Lewis. “I got to meet my hero,” she said of Lewis, “and tell him ‘I am trying to follow in your footsteps.’”

Aaron Brickman of Oakland, Calif., said he came to the tour excited for “an opportunity to make Judaism more progressive,” and even the tattoo around his arm was a call for tikkun olam. The Yiddish, he says, reads “For a more beautiful and better world.”

Hitting The Road for ‘Tax Fairness’