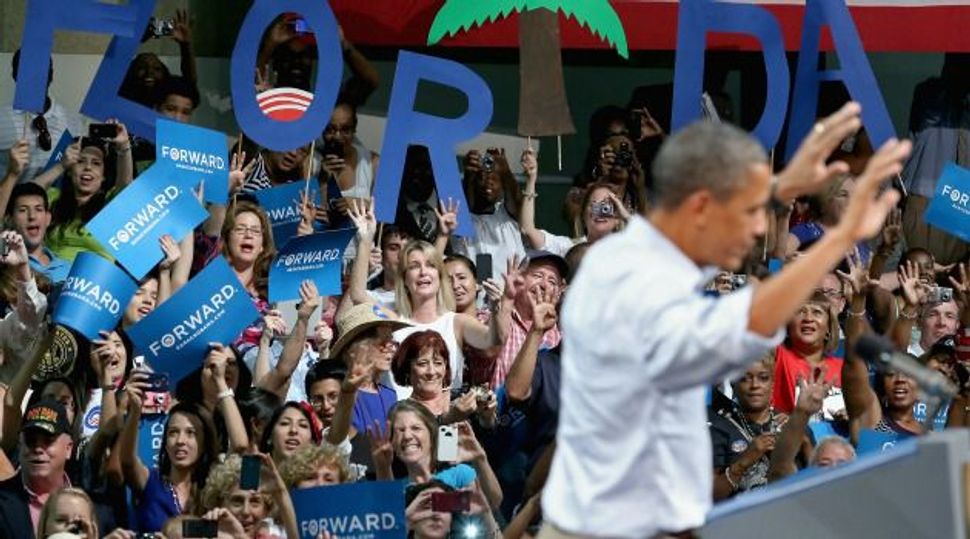 Enthusiasm Needed: One of the best reasons to support President Obama is one word: citizenship. Image by getty images

This week’s question and next week’s as well is why Obama. The first and most obvious answer is the precise opposite of what Romney supporters say when they are asked “Why Romney?” Their answer is that he is not Obama and Obama is plainly not Romney.

But one wants to go beyond the negative argument. One wants to be able to say Obama because he is Obama and not merely because he is not Romney. No one will argue that Obama was dealt an easy hand. He has, of course, made mistakes of his own. But the Obama record is, as Bill Clinton so eloquently taught us at the Democratic National Convenion, a record of considerable accomplishment for which the president has not received the praise properly due him.

There was one high moment during Obama’s speech at the DNC that defined his most central conviction — one word, actually, and the word was “citizenship.” (Talk about not being Romney!). If Obama were able to regenerate the sense of common purpose, the sense of us-ness, if he were able to ignite his core conviction regarding we the people in a way that would make us all feel embraced, this would be not only a different presidency, but a different country. To be able to work for and vote for a president who sees the country in such terms is not a fall back position, it is a rare opportunity.

That is what I mean when I say that the most compelling reason to work for and vote for Obama is Obama. It is too easy and too facile to summarize the Obama presidency thus far as a “disappointment”. There have been disappointments, to be sure, but the net does not add up to disappointment.

The values that Obama and I share, including a robust definition of citizenship, a devotion to mutual responsibility, and a system not rigged to reward Wall Street easily begets my endorsement. More significantly, I think, it compels my enthusiasm and that is what frightens me about the many people I know who are planning to vote for Obama but who, this time around, do so with nearly zero passion. Is not compatibility of values a sufficient cause for enthusiasm?

In Ohio, in Florida, in Virginia and in several more of the so-called swing states, the difference between dutiful support for Obama and enthusiastic support for Obama may well determine the victor in that state. If in order to generate enthusiasm, we were required to manufacture it, the challenge might be too great. But we are not required to manufacture it. It is at hand with ample reason. Again and again that is the point.

We support Obama, enthusiastically, because the war in Iraq is over; because the affordable health care act is the law of the land; because he had the wisdom and gumption to appoint Hillary Clinton as Secretary of State; because to a near certainty, the next several appointments to the Supreme Court will be of men and women who see the Constitution as a living document; and because the preservation of tax breaks for the coddled few is an unacceptable distortion of principles of fairness which most Americans, the polls tell us, believe in.

There are of course other matters, as well. Whatever possibility may exist in avoiding a military engagement with Iran exists because Obama so fervently favors aggressive diplomacy to invasive action. Finally, Obama’s commitment to inclusiveness, which was so visually obvious at the convention in Charlotte, beyond even the immediately visible. It wasn’t just Blacks and Latinos, it was gay men and women, and many people, presumably, who live with the knowledge of their direct participation in the first Black presidency in our nation’s history.

So where’s the problem? Have we ourselves been infected with the cynicism that is so widespread in the nation these days? Does our half-heartedness regarding the Obama candidacy reflect a pseudo-sophistication that is no more than a slightly altered version of the cynicism of which I have been speaking. It is a far cry from the enthusiasm that is both required and deserved.

And then there is Michelle and what we learn about Obama from his relationship with her, his two daughters, and his mother-in-law. And, if all that is inadequate, there is also the fact that Obama is not Romney.