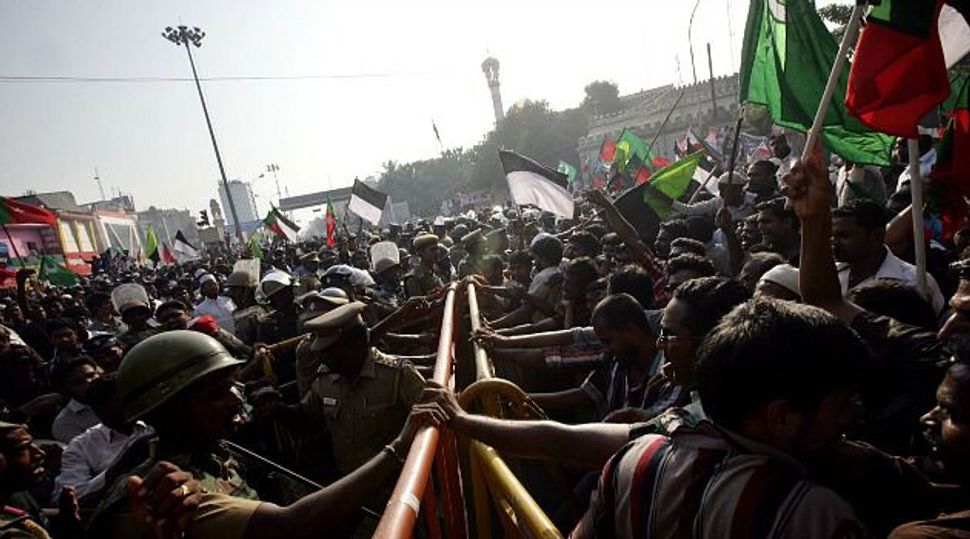 Anger Spreads: The maker of a crude anti-Islam film correctly judged that claiming it was made by Jews would spark an explosion of outrage. Image by getty images

In the media’s coverage of the days of rage and violence against the United States that have swept the Muslim world, Jews and Israel have hardly been mentioned; yet they have a place in the beginning, the middle and, we can hope, the end of this story.

The beginning: Already seemingly forgotten is that the anti-Muslim film that incited the protesters was produced by a politically motivated Coptic Christian, Nakoula Basseley Nakoula, who lied to the press that he was a Jewish Israeli and that “100 Jewish donors” financed the film. This doesn’t pass the “Protocols of the Elders of Zion” smell test, yet it was broadcast by the media, a fact that already says much about the state of the world regarding Jews.

First, Nakoula calculated (rightly so) that by casting the film as having Jewish origins, it would incite a greater reaction.

Second, he presumed that Muslims would believe such nonsense, owing to the prevalence of anti-Semitism in their communities.

Third, the media spread this canard around the world without a whiff of skepticism. When exposed, no necessary media soul-searching — for having helped fuel new anti-Semitism — followed.

Fourth, this highlights the essentialism of how people see Jews. Saying that the film’s financers were Jews was enough for people and for media outlets to treat their alleged participation as self-explanatory. One did not need to know anything else about them — not their countries of origin or their politics — for the tall tale of 100 Jews and not one Christian financing the film to be deemed sufficient. This is prejudice’s essence, deriving a person’s politics from just this one aspect of his identity: He’s a Jew!

And fifth, as is true generally with anti-Semitic fabrications, exposing it as a falsehood neither undoes its damage nor precludes its further repetition and incorporation into the general anti-Semitic litany.

The middle: Images of protesters burning American and Israeli flags abound. Even though the protesters have directed their ire and violence mainly against the United States and its embassies, protesters and media alike take it as self-evident that it makes sense to burn the Israeli flag, as well.

Why? Israel and Jews had nothing to do with the blaspheming of the Prophet Muhammad. Yet political Islamists’ hatred of Israel is so great that burning Israel’s flag doesn’t require explanation — not by them or by the media, or to the habituated public. When political Islamists attack the Great Satan (the United States) for some alleged transgression, the Little Satan (Israel) is also obviously implicated and targeted.

The hoped-for end: Perhaps more than any other recent event, these days of rage could possibly undermine a consistent claim one hears from the blame-Israel-and-Jews-crowd. They say American support for Israel as engendering political Islamists’ enmity for the United States and, even more insidiously, that American Jews’ support for Israel — by allegedly distorting American foreign policy — betrays the United States and produces this hatred. These days of rage reveal unmistakably that the assault on the United States derives simply from the political Islamists’ view that those who blaspheme the prophet ought to be killed and that the world ought to be governed politically by a fundamentalist reading of what Allah presumably has decreed. Israel and Jews have nothing to do with this.

One Internet snippet among millions has enraged much of the Arab and Islamic world because it symbolizes and crystallizes for political Islamists their immense hatred for the United States as the ultimate bulwark against their imposition of a totalitarian theocracy that would prohibit freedom of expression, women’s rights, and religious and personal freedom. Why, we might pause and ask (instead of taking it for granted), would they attack the United States and chant “Death to America” because of an Internet video trailer? It makes no sense. The political Islamists’ rage and annihilative impulse — “Behead all those who insult the prophet” — have nothing to do with Israel per se and everything to do with the world’s opposition to their unbounded totalitarian aspirations.

There is a lot of anti-Semitism in the world and political Islamists and their apologists readily express it and many cynically exploit it or are taken in by it. But let’s not be deceived that Israel and Jews are at the root of political Islamists’ enormous rage at the more successful and powerful and tolerant West. It is not because of Jews that in Egypt they chant, “Obama, there are a million Osamas.”

Daniel Jonah Goldhagen will publish a book on contemporary anti-Semitism next year. He is the author of “Hitler’s Willing Executioners: Ordinary Germans and the Holocaust”(Knopf, 1996).