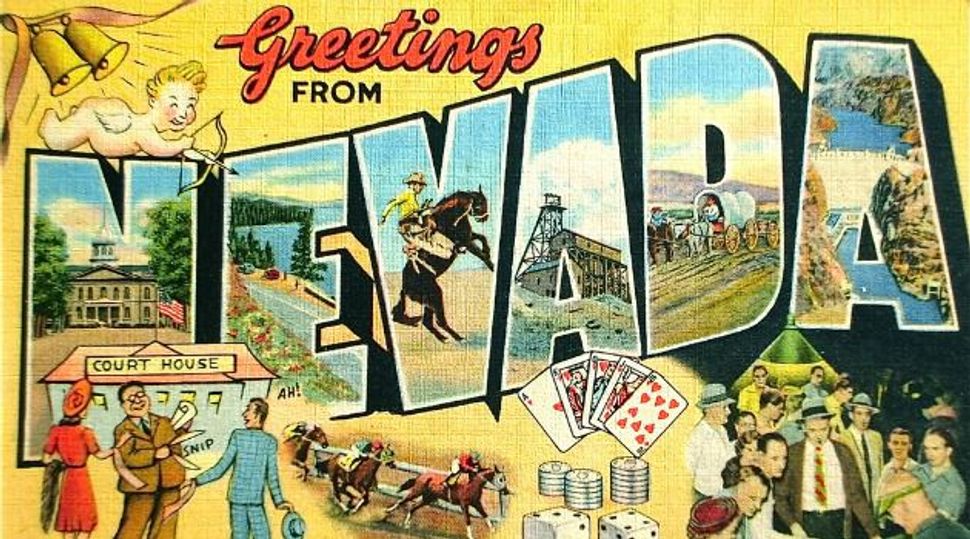 A Southern California rabbi, on learning that I was researching a book on Jews in Nevada, said: “Don’t waste your time. There were no Jews in Nevada until there was a Las Vegas.” It is true that the greater Las Vegas area is currently home to about 100,000 Jews, compared with 13,000 in the rest of the state. Jews, however, have had an influential presence since the discovery of gold and silver on the Comstock in 1859. So before exploring the voting proclivities of Nevada Jews in 2012, a bit of history is in order.

Jews comprised less than 1% of the population when, upon achieving statehood in 1864, the citizenry elected three Jews to the first Nevada State Assembly. One of these was a rabbi on the leading edge of the emerging Reform movement. In 1869, Polish-born Albert Michelson received an appointment to the U.S. Naval Academy. He later measured the speed of light and was awarded the Nobel Prize in physics. Reno’s Jacob Davis created the first copper-riveted jeans and shared his 1874 patent with his duck cloth supplier, Levi Strauss. Adolph Sutro from Aachen, Prussia, engineered a tunnel six miles long, from Virginia City to the town of Dayton near the Carson River. Mark Twain called it a “prodigious enterprise” to drain, ventilate and provide rail access to the mines. It was completed in 1878, when the Jewish population of Virginia City peaked at nearly 500. The city’s Jewish chief of police and prominent butcher, Mark Strouse, recognized a niche in the market and hired a traveling rabbi to be his shochet for Nevada’s first kosher meat market.

Shortly thereafter, Nevada’s declining mineral production sent the state into 50 years of economic depression. The Hebrew Agricultural Society unveiled a plan to triple Nevada’s population with thousands of Eastern European Jews, a venture that was doomed when the group’s Jewish agents ran off with a loan against what was supposed to be the society’s first crop. Reno was the state’s largest city for the first half of the 20th century, and in 1921 it erected the state’s first synagogue. Meanwhile, Las Vegas — settled in 1905 — was little more than a dusty rail stop. The liberalization of Nevada divorce restrictions and the legalization of gambling in 1931 set apart Reno as the state’s first “sin city”; however, the building of Boulder Dam and infusion of federal dollars into the Las Vegas economy during World War II helped to launch the city toward becoming a major tourist attraction. Behind the development of the city’s earliest hotels and casinos was a cadre of Jewish owners and managers, many with strong connections to organized crime elsewhere, like the infamous Bugsy Siegel. Meanwhile, disproportionate numbers of Jewish women advocated for desegregation and civil rights. Former mob lawyer Oscar Goodman served three terms as Las Vegas mayor and was succeeded in 2011 by his wife, Carolyn. The historic footprint of Jews in Nevada history has been amplified in modern Las Vegas.

Jews currently number slightly more than 3% of the total state population. Local rabbis tell me that less than 10% of these belong to a synagogue. These affiliated Jews are spread out among 20 separate congregations in Las Vegas and four in Reno. How this population will vote in 2012 depends on some grim economic figures, a number of wild cards and a few conflicting trends.

Nevada leads the nation in unemployment, homes underwater and imminent foreclosures. The national recession has wounded the tourist industry. The state has no income or estate tax, and the prospect of raising property or sales taxes to help offset the state’s loss of revenue is unthinkable to many. Michael Green, professor at the College of Southern Nevada and historian of Las Vegas Jewry, has identified a few of the possible critical factors that will affect how the state’s Jews vote in 2012; they include demographics of the Nevada Jewish population, the Culinary Union, Shelley Berkley and Sheldon Adelson.

Las Vegas has long had the fastest-growing 55-plus population in the country. Green has observed that its residential patterns never expanded vertically, nor did they “Manhattanize.” Rather, they expanded outward into the boundless desert. For Jews in this group, the result was a growing independence from traditional Jewish values once reinforced by neighborhood and synagogue affiliations. While Jews will likely remain heavily committed to the Democratic Party, they will be more conservative than the national Jewish average.

Nevada is a right-to-work state, but the Culinary Union is very strong in Southern Nevada. While the union will not likely change people’s opinion of Barack Obama or Mitt Romney, it could help to get out the union vote. This would favor Obama and local Jewish favorite Berkley, who has been Nevada’s congressional representative from Southern Nevada since 1999. She is currently running for the U.S. Senate against a Republican incumbent. Her congressional voting record reflects the staunchest support for Israel and its governing party on the one hand, and an equally strong advocacy on civil rights, women’s issues, gun control and organized labor on the other.

In the past, her re-election to Congress from a safe district was virtually ensured, but she is now carrying some unwanted (and, her supporters would say, “underserved”) baggage. The Republican-controlled House Ethics Committee is investigating whether Berkley’s successful opposition to the federal closing of a Las Vegas kidney transplant center where her husband works was a conflict of interest. The timing and outcome of that investigation will certainly add drama to her race. Pundits had speculated that in order for her to win, she would need 55% percent of the Las Vegas vote and a break-even outcome in Northern Nevada. A growing number of Nevada Jews stand in opposition to Israeli policies regarding the Palestinians, but that is not likely to deter them from supporting Berkley, who frequently expresses hawkish views on Israel.

Las Vegas resident Adelson is among the wealthiest people in the world and is an unapologetic supporter of Benjamin Netanyahu and his Israeli politics. While he is admired by some for his business acumen and appreciated for his local philanthropy, it is unlikely that these attributes would move conservative Jewish Democrats or independents to vote Republican. Some observers have even warned that Adelson’s multimillion-dollar support for Newt Gingrich and the Romney-Ryan ticket, as well as his planned developments in Spain, may create a blowback among those caught up in Nevada’s economic crisis and who resent a rich man’s meddling. No one denies, however, that Adelson’s one vote is freighted heavily against Obama and Berkley, who once worked for Adelson but had a public falling-out over the casino magnate’s views on unions.

Richard Siegel, emeritus professor of political science at the University of Nevada, Reno, sees some conflicting trends that complicate predictions of the Nevada Jewish vote. Older Jews unflinchingly support Israel, he says, while younger Jews are increasingly less concerned about Israel as a national imperative. He believes these older Nevada Jews will strongly support Obama in 2012 but at a rate of 5% to 10% lower than in 2008, due to changes in their socioeconomic status and consequent tilt to the right.

Prototypical Nevada Jews are religiously unaffiliated, female, more than 55 years of age, relatively well educated, generally secure economically and, if not retired, employed in a managerial or professional position. Their politics — traditionally Democratic — will be challenged statewide by a much larger block of voters, the Mormon population that is traditionally Republican, and by members of the small but well-heeled Republican Jewish Coalition, who will try to chip away at these Jewish voting patterns. At stake are five electoral votes and possible control of the U.S. Senate. Predicting a Jewish vote in Nevada is a gamble. To paraphrase Christian Scripture and Jewish jest, “Where two or three are gathered together, there is a fourth or fifth opinion in the midst.”