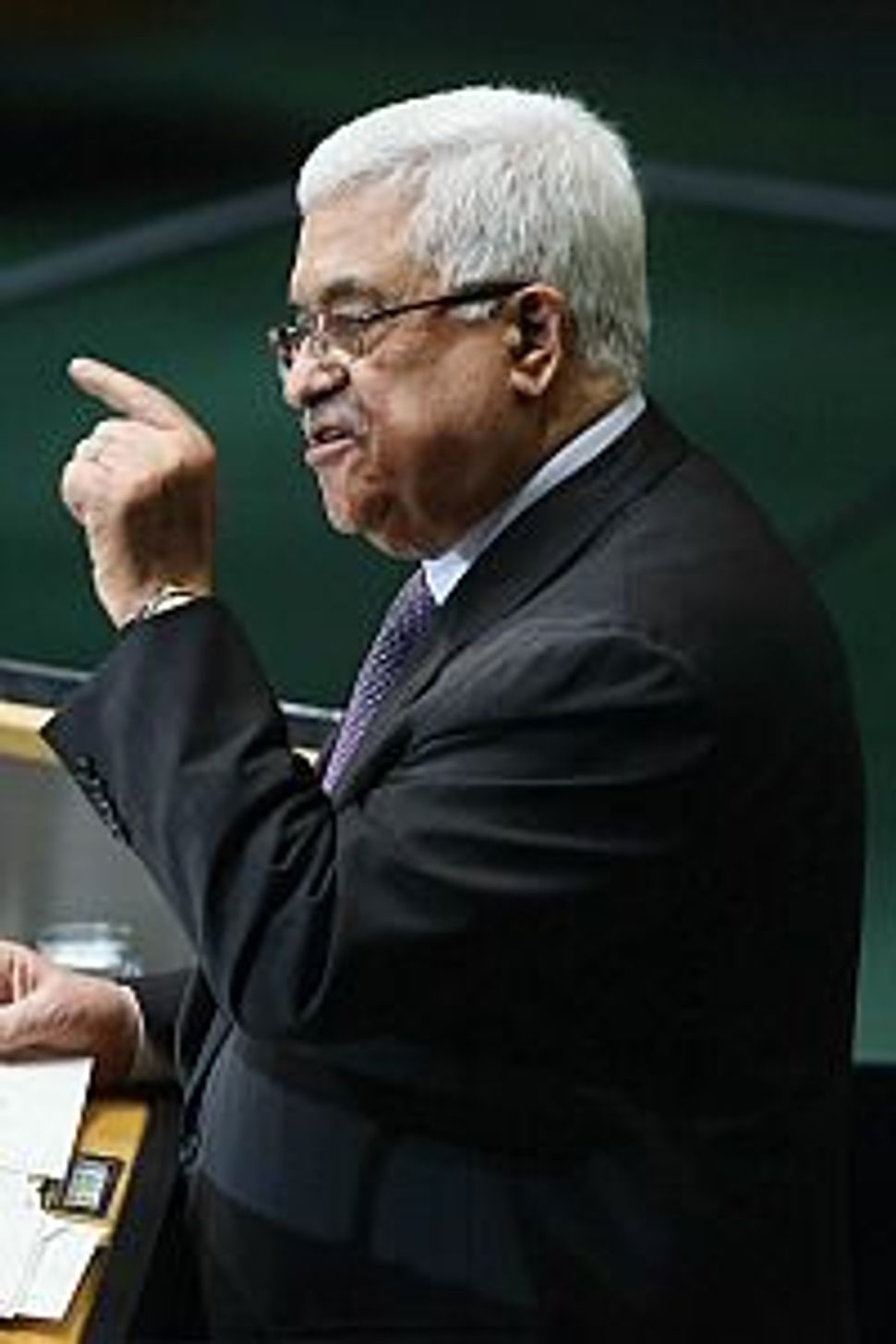 Mahmoud Abbas at the UN General Assembly on September 27. Image by Getty Images

Mahmoud Abbas and Benjamin Netanyahu once again avoided speaking to each other yesterday, as they have done for the past three years. Despite both claiming that they want to restart conflict-ending talks, there was little evidence of that in either leader’s speech to the United Nations’ General Assembly.

Abbas was on the attack from the outset. Speaking as the representative of an “angry people,” he leveled a familiar list of charges against Israel. Ethnic cleansing, settler violence, unlawful detention and the closure of the borders with Gaza all got a mention. Most were met with applause. So too, the call for Israel to be “condemned, punished and boycotted.” He noted that the Palestinian population is young and frustrated, hinting that violence could once again return. Yet, he claimed, Israeli policy and an aggressive brand of Israeli political discourse means that the Palestinian Authority, the guardian of Palestinian political and security relations with Israel, is under threat of collapse. There is only one way to understand this and only one conclusion to be drawn, he said. The Israeli government rejects a two-state solution.

Not so the Palestinians. Although time is running out, there is a chance — “maybe the last” — to return to talks. And he reassured the General Assembly that there is no need for marathon negotiations or to solve an “intractable riddle.” The solution already exists. All it needs is a return to the UN’s own terms of reference and the Arab Peace Initiative.

But even whilst calling for a “new approach,” Abbas actually drove peace efforts further up last year’s cul-de-sac. His announcement that he would be seeking a General Assembly resolution to grant non-member status to the Palestinians is anathema to Israel. It is also a pale echo of last year’s thwarted application for full UN membership. Abbas wants the support of the UN to draw the 1967 green line on the maps ahead of any negotiations, and for talks to then discuss changes to that line. Israel’s precondition for talks is that there are no preconditions, and thus rejects this approach. So, we can assume, will the next U.S. president.

Benjamin Netanyahu, on the other hand, hardly talked about the Israeli-Palestinian issues. The line he is drawing is red, and it is intended to ensure that President Obama makes good on his pledge earlier in the week to prevent Iran from obtaining a nuclear weapon. He urged for action to stop Iran now, before it’s too late. That point will arrive in the spring or summer of 2013, when Iran will have enriched enough uranium to a sufficiently high level to build a bomb. Now is the time “because these enrichment facilities are the only nuclear installations that we can definitely see and credibly target.”

If he marked the targets as the uranium enrichment plants at Natanz and Qom, Netanyahu also offered a way out for the Iranians. If enrichment to 20% is halted, and existing stocks are either shipped out of Iran or put under stringent international supervision, Israel seems unlikely to act. And whilst there was nothing explicit, it seems that Israel will not object to Iran continuing to produce low-enriched uranium for medical research.

Bibi’s speech, complete with teaching aids, was certainly more memorable, which was probably the intention. By setting out a timetable, he lifts the threat of immediate military action before the elections and gives a little breathing room for international efforts to halt Iran. However, the ultimatum he delivered is unlikely to be well received in Washington.

Though the speeches hardly referred to each other, they shared one common theme: Both Abbas and Netanyahu were talking to the same person. Whilst Abbas may hope his UN strategy could force Israel to the negotiating table, he knows that only U.S. support and pressure can bring about meaningful talks. Israel’s security establishment, past and present, is telling Netanyahu that Israel cannot successfully attack Iran alone and that he must coordinate with the U.S.

The fact that Netanyahu and Abbas don’t see the world in the same way is no great revelation. But in their speeches yesterday, both appealed to the U.S. to see the world as they do. Come November 6, the newly-elected President will have to decide how to make sure these divergent claims don’t further disrupt the already turbulent region.