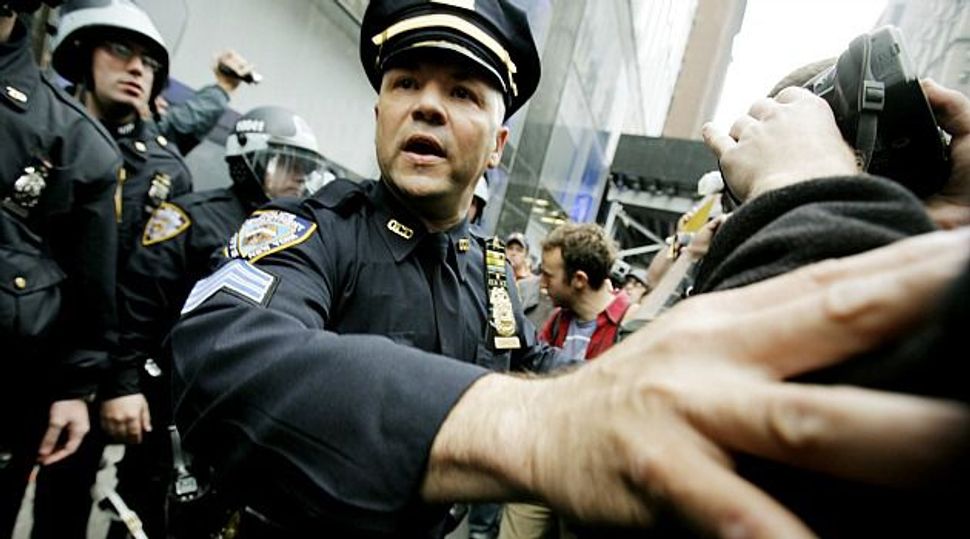 What would it look like to have your movements and your friendships tracked simply because of your religion or where you prayed? Syed Farhaj Hassan knows. He stopped attending his mosque in New Jersey after discovering that the New York City Police Department had it under surveillance. Hassan, a specialist in the Army Reserve, told The Associated Press that he worried about his name, or the name of one of his mosques, turning up in a police intelligence dossier and jeopardizing his military security clearance or job prospects. He is one of eight American Muslims who filed a federal lawsuit in early June against the NYPD to force the department to change its surveillance tactics, which are aimed at singling out our Muslim neighbors and colleagues.

As Jews, we are just emerging from the Yamim Noraim, the High Holy Days, when our lives metaphorically become an open book before God and our year of deeds good and bad are examined and explained. But this examination is between God and us, not God and the state. Imagine if we worried that by going to synagogue for Yom Kippur, we would end up in the NYPD’s ledger of right and wrong. Under this aura of suspicion, the significance of the holy days would be replaced by mistrust and fear.

This is what the New York Muslim community must face. As Jews and as New Yorkers, we’ve been angered over the past year to read about targeted surveillance of Muslims by the NYPD. Numerous reports have shown that the NYPD has spied on Muslim student organizations, taken down the license plate numbers of people attending services at mosques and showed the inflammatory film “The Third Jihad” to hundreds of police trainees — targeting the Muslim community as a whole rather than acting on specific intelligence about individuals.

One NYPD practice that hit particularly close to home was the surveillance on college campuses, including infiltrating a student whitewater-rafting trip. For those of us who thrived in Hillels during our student years, it is unthinkable that those communities would cease to be safe spaces.

Jews have a historic vulnerability to abuses of power, and we feel especially responsible to ensure civil liberty protections for all New Yorkers. We know that the Jewish communities of New York City, like all communities, want to be assured that we are being kept safe against those who would do us harm. Keeping us safe, however, means that law enforcement should target suspects based on actionable evidence, not on those suspects’ religion, place of birth, race or ethnicity.

Two New York City Council members have introduced a bill that will create an Inspector General for the NYPD, which would have independent, broad authority to conduct investigations of the police department. Law enforcement officers would be required to report problems to the Inspector General and would also be protected from retaliation.

Inspectors General are a standard feature of government agencies — including the CIA, the FBI, and the U.S. Department of Justice — and most New York City agencies. While there are agencies that investigate individual cases, no mechanism exists to provide for independent investigations of NYPD policies and procedures to ensure that they are operating effectively and consistently with the law.

We encourage the City Council to adopt the Inspector General bill and its four companion bills, which would create additional safeguards against inappropriate NYPD surveillance and stop-and-frisk abuses. This includes prohibiting profiling by the NYPD, protecting New Yorkers against unlawful searches, and requiring officers to identify and explain themselves to the public.

In this Jewish season of renewal and rebirth, in which we celebrate the universal value of equality of human rights, the New York Jewish community supports the local American Muslim community effected directly by this surveillance program. Every one of us should stand in solidarity when it comes to protecting the civil liberties — regardless of faith, ethnicity or race.