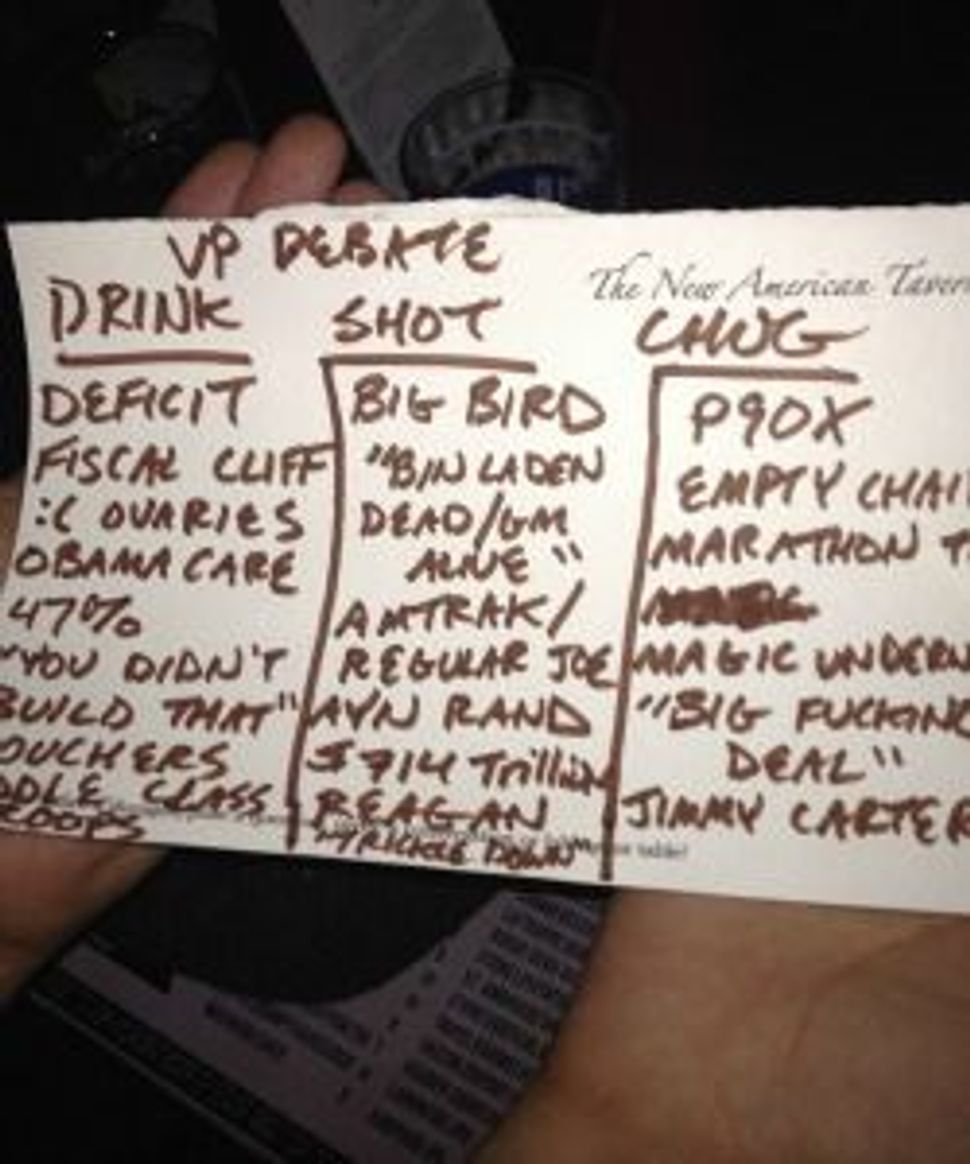 All but four of the people at Professor Thom’s bar in the East Village on Thursday night were watching the vice presidential debate between Joe Biden and Paul Ryan.

The other four were watching the Yankees lose to the Orioles in extra innings in their playoff series.

In a bar that leaned heavily Democratic, the cheers for the Yankees landed incongruously, one coming in the midst of what might have been a Ryan applause line in another bar.

It’s hard to get a good read on the response to a candidate’s performance in a boozy, partisan watch party at a pub. (I tried a similar thing in West Palm Beach last week, where I sat in on both Republican and Democratic debate watch events.)

As far as I could tell, though, the experience of the Democrats at the divey NYU-area sports bar last night was anxiety, followed by relief.

“I’m worried (that) I’m maybe in denial for not being worried,” said Rachel Schwartz, 23, expressing a complicated nest of election-related issues. Schwartz was attending a debate watch event at Professor Thom’s organized by something called the New American Tavern, which plans political-themed events at watering holes.

Speaking before the start of the debate, Schwartz sat at a table full of beer pitchers. Two tables over, a group of friends had sketched out an elaborate drinking game with a marker. A mention of the word “deficit” meant that everyone at the table had to “drink.” A mention of the notion that Bin Laden was dead and General Motors was alive required a “shot.” And a mention of P90X, the workout program Paul Ryan favors, required that players “chug.”

They had a long night ahead of them.

Evan Berkow, 30, and Megan Gohlke, 34, didn’t arrive in time to get seats. Standing by the bar while waiting for the debate to start, both said they were nervous. They cut the tension with jokes.

As the debate wound down, the room seemed pleased.

“He killed it,” Gohlke said.

At the table that had been playing the drinking game, things were a bit disorderly. Craig Hirscheerger, one of the players, gestured to the vast number of empty pitchers and glasses on the table. Justin Chotikul, another player, thought the group could have gotten drunker.

“We could have had malarkey on there,” he said..