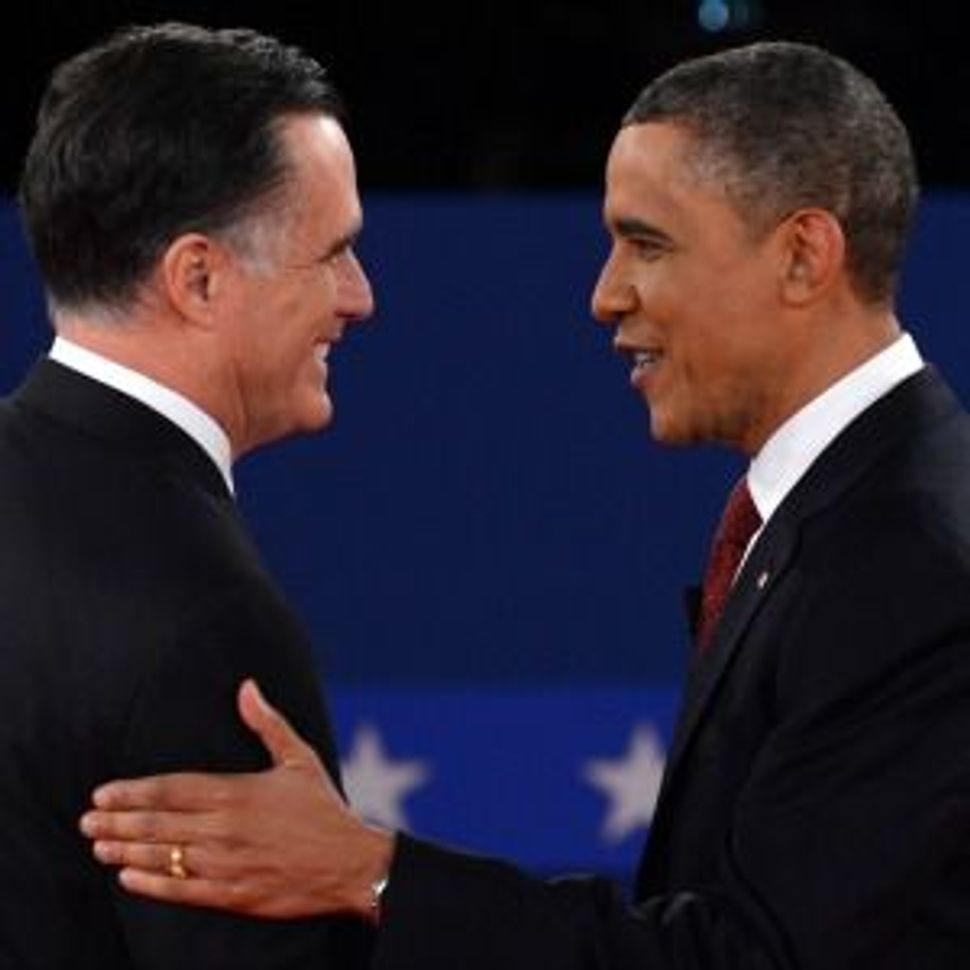 Having used the Forward’s patented debate drinking game tonight, I’m sitting here quite dry. Which means I’ve got a few quick takeaways from the slugfest in Lon Giland.

1) Jewiest debate ever: Let’s just get this out of the way. Carol Greenberg? Jeremy Epstein? Barry Green? Cary Latke? Latke?! Thankfully the next debate is in Boca Raton, which is a relief, because I was worried only middle aged Jews would get a chance to make their voices heard this election cycle.

2) Maybe there was an altitude problem in Denver: Obama was so much more present, energetic and effective right out of the gate that at first I even thought the extreme contrast with his Denver performance could be a liability. It would highlight just how bad he had been. But then he just kept striking the contrasts he needed to strike — most notably on tax policy and social issues — and it became obvious that whatever happened, whether the altitude or anything else, Obama had clearly learned from his mistakes and had shown up. It made for a much, much more lively debate all around and put the lie to the conventional wisdom that somehow this town hall debate would not lend itself to sharp exchanges and attacks. It was actually the least congenial debate I can remember in any recent election cycle, for better or worse.

3) Patronizing Mitt: Since Republicans spent a lot of time picking apart every one of Joe Biden’s eye rolls and giggles, it seems safe to take a look at Romney’s style tonight. From basically telling the president to shut up and wait his turn to having to be told by Candy Crowley to sit back down in his chair, Romney came off as less empathetic and human than he did in the first debate. He seemed angry. While the president seemed — amazingly — to be enjoying himself. Romney also seemed to have a harder time with issues like gender inequality and gun control. While he kept trying to move to the center, Obama kept pushing him back to the right. This was brilliantly done by the president in the exchange over George W. Bush. Romney made what looked at first like a bold decision to throw Bush under the bus (where at least he’ll have Israel for company!) for not dealing with the ballooning deficit. Obama then took the opportunity to compare Romney with Bush and further cemented his image of the governor as the “severe conservative” he once claimed himself to be, to the right of Dubya on issues like immigration and social security.

4) Triumph of the fact check: So much of this campaign has revolved around competing claims of truth and falsehood. Each side repeatedly calls the other a liar and a whole industry of fact checkers has emerged over the last few cycles to act as referees. Because of this, the moment that will probably have the most resonance from this evening is when Candy Crowley fact checked in real time (a feat in itself) a claim by Romney, calling it in Obama’s favor, to the applause of the audience. Put aside that the Obama administration has not come up with a good answer for the way the attack on the Benghazi embassy was spun in the hours after it occurred, the president did in fact call it an act of terror in the Rose Garden the following day. Romney was caught looking silly and like a prevaricator for saying otherwise. And I’m willing to predict that the enduring moment, bound to be replayed tomorrow a few times, is Obama asking, “Can you say that a little louder, Candy?”