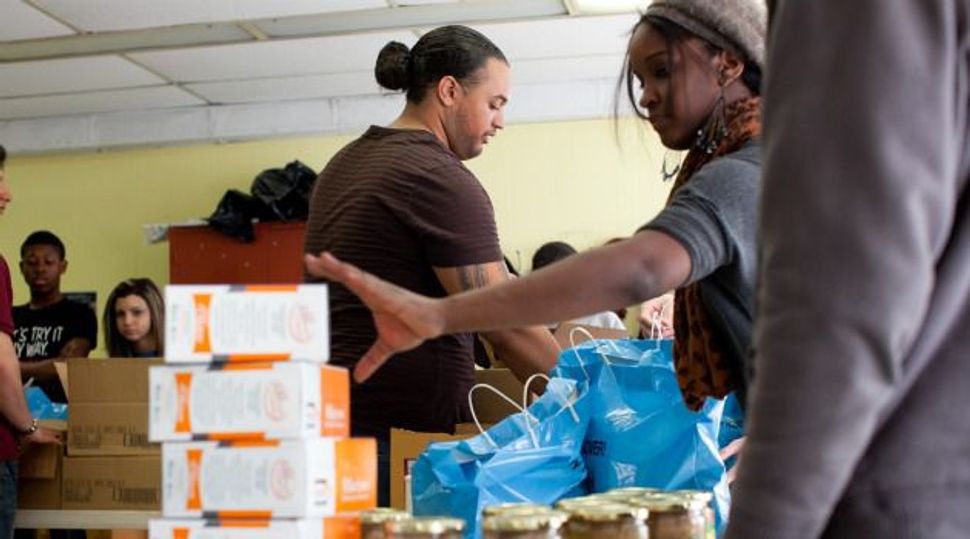 Between two holidays that celebrate plenty — Sukkot and Thanksgiving — we are entitled, if not downright obliged, to inquire into the implications of plenitude.

Accordingly, let us start with a Happy Birthday greeting. The greeting is in honor of Mazon, now in the second year of its second quarter century. Mazon began as a marriage between a simple statistic and what seemed to be — and, as it turned out, was in fact — a readily available opportunity. The critical statistic was that in the aggregate, American Jews spend many hundreds of millions of dollars each year on catered celebrations. (The original estimate, in the $500 million range, was based on weddings and bar and bat mitzvah celebrations alone.)

Some of these are celebrations of “Goodbye, Columbus” proportions; most are considerably more modest. For years, rabbis have railed against excessive consumption; for years, at virtually every level of income, people have been seized by a “can you top this?” fever. But: What would be the response if celebrants were encouraged voluntarily to add a three percent surcharge to the cost of such functions, thereby creating a fund with which to make war against hunger?

Out of the statistic and the idea the organization, a grass roots effort, came into being. In its first year, it raised $163,000; in its second year, $558,000. By now, 27 years later, Mazon has distributed more than $60 million to the enduring campaign to end hunger.

Rabbi Hillel asked, perhaps rhetorically, “If I am not for myself, who will be for me?” and “If I am only for myself, what am I?” These two questions frame the tension between particularism and universalism. But the universalism that Hillel himself intended by his second question almost surely did not extend beyond the then impenetrable walls of the Jewish community. Today, we have come to understand that second question far more expansively; in effect, we have read Hillel’s question with Jonah’s eyes. And we are coming, ever so slowly, to understand that what is expected of us is to live where the two questions meet, there where particularism (read: stability, interests) and universalism (read: justice, ethics) intersect.

From the prophets we learn how to bridge the gap, to restore the religious connection, to revive the understanding that ethics and politics are not separate. Once, we left corners of our fields to be gleaned by the poor. Once, in Eastern Europe, it was routine to invite the beggars to join in our wedding celebrations. Today, far from the fields and afraid of the beggars, new times, new ways – among them “Mazon: A Jewish Response to Hunger” (mazon means “sustenance”), which came into being in October of 1985. It was the product of a startling statistic and a disarmingly simple idea.

Twenty-seven years later, what have we learned from Mazon? First and foremost, that very many people are accessible to the traditional appeal that our bread is to be shared with those in need. Mazon quite specifically avoids asking people to sacrifice for the sake of the poor; its appeal emphasizes, instead, that the joy of the celebrants is enhanced if their celebration includes this act of kindness towards the stranger. More specifically, Mazon makes its argument in classic language: At the Passover seder, we say, holding up the matzah, “This is the bread of affliction; let all who are hungry enter and eat.” Citing the verse, Mazon asks whether we can expect the hungry to hear the invitation if we do not seek them out; Mazon proposes that we enable one – and then, of course, another and another and another – who is hungry, to enter and eat.

But why should Jews, as Jews, become involved in helping to feed the hungry, who are overwhelmingly non-Jews? If, as we would hope of a religious folk, the Jews care about human pain and suffering, why should they not send their contributions directly to Oxfam or to any of the myriad other organizations that fight the good fight?

Here we return to the prophets, and to that tension between particularism and universalism that characterizes creative Jewish life. In order for the language of faith to be understood and to elicit a response, there must be a community of faith. In order to repair the breach between “faith” and “everyday life,” we must act in the world of everyday life from within the world of faith, or, as I would prefer, the world of faithfulness. In order to preserve that particularity which sustains a faithful community, we must discard the concept of “Jews as Jews.” That concept immediately reflects the problem of compartmentalization, for it suggests that sometimes we act as Jews and other times we do not world fully informed by faith, Jews (and, mutatis mutandis, others) cannot but act as Jews; that is who and what they – we – are.