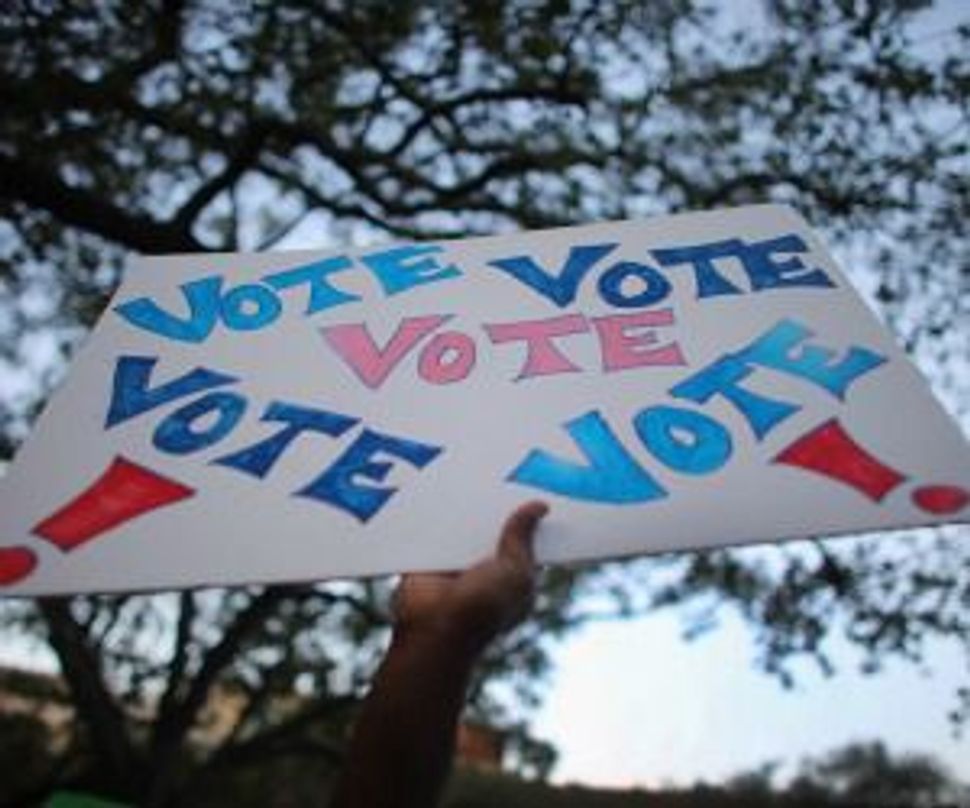 It’s Election Day at last. And as we sit down in front of the TV to watch the results (for those who actually have power), here are five Jewish points of reference on this long night of swing states, bellwether counties and exit poll results.

Ohio. With polls closing at 7:30 p.m., the entire nation will watch to see if President Barack Obama wins the state, thus virtually paving his way to another four years in the White House. But Jewish politicos should look beyond the presidential race to the brutal Senate showdown between incumbent Democrat Sherrod Brown and Jewish Republican Josh Mandel. Brown is in the lead but it is a close race and if Mandel, a Tea Party loyalist, is able to pull it off, he’d be the star of Republican Jewish politics. A Mandel upset would be a bitter moment for the Jewish Democratic establishment, including in Mandel’s home state, which have fought hard to defeat him.

Florida. Polls close at 8:00 p.m. in the Sunshine State and this is the one time it is a good idea to actually look into those detailed maps on your TV hosts’ touch screens with a county-by-county breakdown. Regardless of how Florida goes, our eyes are on the three southernmost counties: Miami-Dade, Broward, and Palm Beach.

That is where the Jewish population is concentrated and a quick look at how these counties went could give a pretty good indication on just how effective those million of dollars spent on campaign ads and robocalls were in convincing your grandparents to switch side.

Exit Polls. For a better sense of who Jewish voters sided with, it is also worthwhile looking at the national exit polls that will begin to produce data beginning in the early evening. But there is a necessary word of caution here: the sample size for Jewish voters is tiny, almost insignificant. So when a national compilation of exit poll data tries to characterize the “Jewish vote” what they are really talking about is how Jews in a sample of several hundred people voted. Still, it is a reasonable indication.

For those willing to wait a little longer, two polls targeting Jewish voters will be released Wednesday afternoon. One is being conducted by J Street pollster Jim Gerstein and the other, which will include a national Jewish voter survey as well as specific polls in Florida and Ohio, is being conducted by Arthur Finkelstein for the Republican Jewish Coalition. Both are politically motivated groups but both are also credible pollsters, so their data should provide a fairly good read on Jewish vote.

And a last cautionary remark: The big question will be whether Obama lost Jewish votes compared to 2008. But it is a tricky one. Republicans will want to look at a baseline of 78% support for Obama in 2008, which is based on the exit polls at the time. Democrats will argue that their guy only got 74%, since they are looking at a later analysis of the exit poll data.

Roll the Dice. Now it’s 10:00 p.m. on the East Coast and things are (hopefully) starting to wind down. Time to look at Nevada’s Senate results. Jewish congresswoman Shelley Berkley made a bet fit for her hometown of Las Vegas and gambled on a Senate race, giving up her safe seat in the House. Berkley’s running not only against a tough Republican incumbent, Dean Heller, who has been leading in the polls, but also against local Jewish billionaire Sheldon Adelson who willingly funds any candidate ready to defeat Berkley, a former friend turned political nemesis.

Valley Guys. California closes its polls at 11:00 PM eastern time. And while Obama is expected to romp in the presidential race, the state’s 30th congressional district has provided one of the most brutal political cage fights this cycle. It is the now famous Howard Berman vs. Brad Sherman race for Congress, a race that has encompassed all the elements of a perfect drama: Two Jewish congressmen, both pro-Israel, are thrust together into a single district by redistricting.

Berman, a senior House member, had the party establishment behind him and lots of money. But Sherman had the ground operation, and a lot of money too. Negative ads covered the airways, things got even worse when Sherman tried to physically accost Berman during a public debate. When the results roll in, one prominent pro-Israel Jewish lawmaker will likely see the end of his political career.